Asean, Korea team up for flute festival, the first of its kind | Inquirer Lifestyle ❮ ❯ 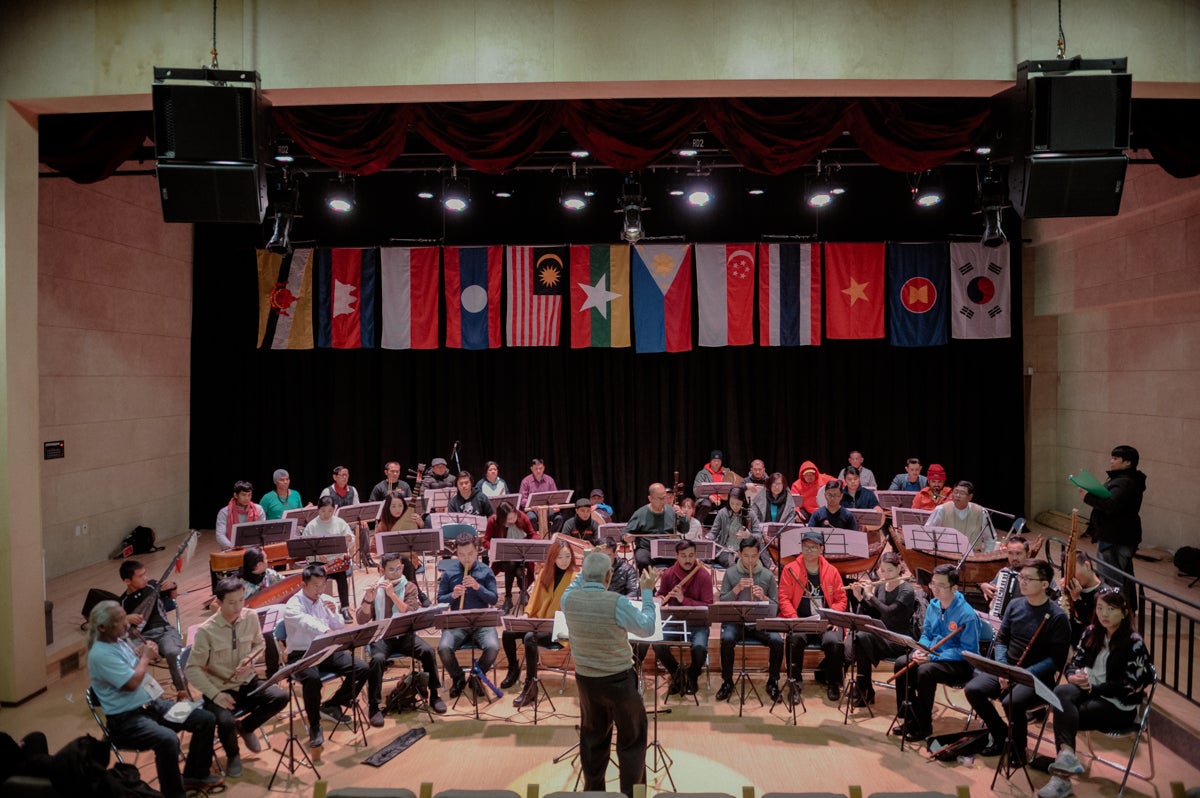 Asean, Korea team up for flute festival, the first of its kind

For a gruelling but joy-filled two weeks, flutists and other traditional musicians from the Association of Southeast Asian Nations (Asean) and Republic of Korea (ROK) converged in the Philippines and Korea to interact with the music-loving public, especially students, collaborate and mount concerts, and celebrate the unity amid diversity of cultures and nations.

The Asean-Korea Flute Festival, which ran Nov. 26-Dec. 2 in the Philippines, and Dec. 2-9 in South Korea, was held amid the euphoria of Manila hosting the 50th anniversary summit of the Asean.

Musicians from Korea and the 10 Asean countries (aside from the Philippines, these are Brunei Darussalam, Cambodia, Indonesia, Laos, Malaysia, Myanmar, Singapore, Thailand, Vietnam) gave lecture-demonstrations on their respective music traditions before high school students in Rizal, Bulacan and Pampanga provinces; and before music students and the public in Seoul and Busan.

They also exchanged ideas about their musical practices and did musical collaborations. The culmination of all this was the series of concerts given at RCBC Plaza in Makati City and Rizal Park, and at Conrad Hotel in Seoul and Asean Culture House in Busan.

Asean and ROK  “have diverse cultures and they have very different music traditions. But even with the differences,” she added, “they still find similarities. The music festival was an opportunity to share these 11 countries’ own traditions, their own cultures.”

National Artist for Music Ramon Santos, artistic director of the festival, said the event enabled musicians across the region  to share “their musical attributes” with one another and with the public.

Santos noted that “the flutes in our region fulfill different functions in our societies,” and these were shared during the lecture-demos.

The idea for the festival came from Singapore flutist Quing-Lun Tan during the 2015 Asean Youth Camp hosted by the Philippines in the Cordilleras. Santiago helped conceive the festival.

Because Asean countries have their own flute music traditions, Tan and Santiago had thought, why not bring them all together in one festival to celebrate unity in diversity? Forthwith Tan became festival director and Santiago, project coordinator.

Meanwhile, the National Commission for Culture and the Arts  (NCCA), via its International Affairs Office headed by Mary Anne M. Luis and with Emily Tiongco as consultant, communicated with the Embassy of Korea to help organize the festival via the Asean-ROK Cooperation Fund.

The NCCA organized the Philippine leg while the Seoul Music Group helped organize the Korean leg.

Delegates were all praises for the warm hospitality accorded to them in the Philippines and Korea. High school students welcomed them as “rock stars,” said Mohammad Izwandy Haji Hamjah.

The students asked for their autographs. They also asked for “groufies” (group selfies) with their favorite musicians.

Meanwhile, Korean musicians were welcomed as classical- or traditional-music versions of K-pop, as the global phenomenon of Korean pop music is now known.

Santiago said the flute festival should provide some corrective.

“Asian traditional music may be something of a ‘never-heard’ class of music where what we’re more attuned at hearing nowadays are contemporary pop music, such as K-Pop and J-Pop,” she said.

“Thankfully, we Filipinos (had) a chance to experience a different kind of music—all united by some kinds of themes of comparison and contrast in the musical forms and the kinds of instruments used.”

In both Philippine and Korean legs, the festival culminated in a concert in which the musicians were able to show off the product of their collaboration.

In the opening number, “Fireflies,” the musicians applied their own respective flute instruments and music traditions to represent the magical lit creatures.

“The music speaks of nature’s fragile beauty through the voices of the flutes, with the flutists mimicking life in Mother Nature’s heart—the fading forest and the final refuge of fireflies,” the music notes said.

In “The Beauty of Asia,” the Asean and Korean musicians formed ensembles and composed pieces inspired by the “different strands of life that bind nature, man and music.”

In the climax of the concert, the delegates formed an orchestra of traditional musicians and instruments to perform “Ihip-ihip-an” (Blowing Together), an original composition of Santos, who conducted.

Santos described his composition as “an experimental piece that combines the flutes and other traditional instruments of Asean and Korea, from zithers and monochord, bowed string, xylophones, mouth organ, gongs in a row, to frame drums, two-headed drums, bamboo buzzers and stomping tubes.”

“While the tones do not necessarily have any common temperament,” Santos explained, “the piece explores the different colors that these instruments can offer, attempting to blend the homogenous and later developing into a heterogeneous amalgam of tones. Furthermore, these sounds are gradually spread out over a time continuum that is defined by the drone and melody principle of Asian music.”

In Busan, the flute festival became the inaugural major concert to be hosted by the performing arts hall of the Asean Culture House, the spanking complex built and inaugurated in 2016 by Korea to honor  its Asean partners. (Asean is now Korea’s largest trading partner, second only to China.)

The Asean Culture House is  a four-story building that spans 2,640 square meters in the port city’s vibrant Haeundae area. It is  operated by the Korea Foundation and it has  exhibition halls, libraries,  “culture experience chamber” and research and seminar rooms.

It  displays cultural artifacts donated by each Asean  member country, featuring their traditions and practices, their arts and crafts, their religions and cosmologies, while offering a venue for music concerts and performances, as well as gatherings among Southeast Asians  based in Korea.