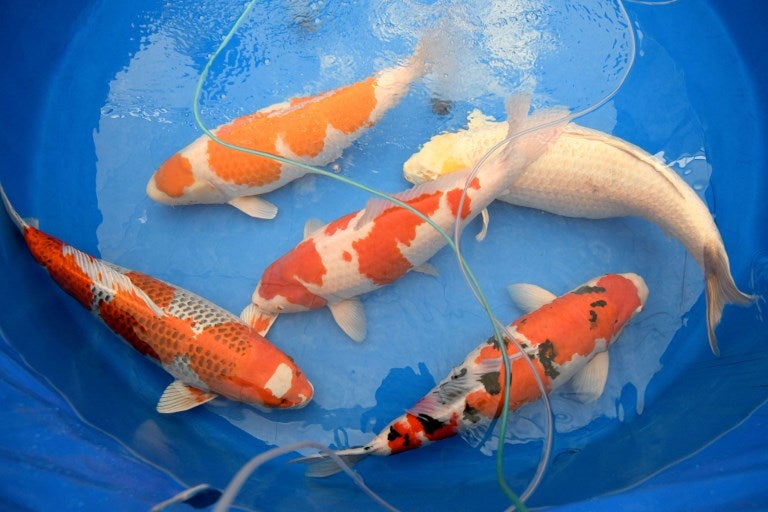 This photo taken on November 30, 2017 shows nishikigoi koi carp swimming in a water tank at the Kurihara Fish Farm in Kazo, Saitama prefecture. Hand-reared for their colour and beauty, koi carp have become an iconic symbol of Japan that can sell for hundreds of thousands of dollars and even participate in fishy beauty contests. / AFP PHOTO / Toru YAMANAKA

Hand-reared for their color and beauty, koi carp have become an iconic symbol of Japan that can sell for hundreds of thousands of dollars and even participate in fishy beauty contests.

The nation’s koi carp were brought to the world’s attention when visiting US President Donald Trump was snapped unceremoniously dumping the last of a box of feed into a palace pond in Tokyo.

But the fish have for decades been popular in Japan, where top breeders take their most prized specimens (known as “nishikigoi”) to highly competitive “beauty parades.”

At one such competition in Tokyo, judges in sharp suits, notebooks in hand, stride around tanks lined up along a pedestrian street where the valuable koi strut their stuff.

They come in all the colors of the rainbow: pearly white, bright red, cloudy-grey, dark blue, gleaming golden yellow.

But it is the curvature of the fish that accounts for 60 percent of the final score, explained competition organizer Isamu Hattori, who runs Japan’s main association for breeders of koi carp.

Color and contrast make up another 30 percent, he told AFP.

And the final 10 percent? “Hinkaku” — a concept that is tricky to define and even harder to judge, best translated as the “presence” or “aura” of the fish.

“‘Hinkaku’. It’s either there in the genes at birth, or it’s not,” mused Mikinori Kurikara, a koi breeder in Saitama, north of Tokyo, who says he can spot it in fish when they reach eight or nine months old.

“Put it this way, it’s like looking after your own children every day. You care for your kids and want them to grow healthy. In the same way, you take care of these fish, appreciate them and adore them,” he told AFP.

At his farm, thousands of tiny “nishikigoi” (colored carp) dart around deep basins of carefully purified water, meticulously divided by age and color.

A less glorious fate awaits the other koi who have not been fortunate enough to catch the eye of the breeder: they are sold off as feed for tropical fish.

“It’s a really delicate job, really difficult. Everything matters: the ground, the water quality, the food,” explained the 48-year-old, who took over the farm from his father and is training his son, half his age, in the subtle arts of koi breeding.

“We have many secrets,” he adds mischievously. “But even if we let them slip, it wouldn’t work. You have to be able to feel it.”

These days, any self-respecting traditional Japanese garden has plenty of colorful koi gracing its ponds, but it is a relatively recent tradition.

Around 200 years ago, villagers in the mountainous region around Niigata (in the north-west of Japan) started to practice genetic engineering without knowing what they were doing.

For the first time, they began to cross-breed rare colorful carp, not for food but for pure aesthetical value.

The craze for nishikigoi gradually took over the whole of Japan and then spread into other parts of Asia.

They are especially popular in China, where carp swimming against the tide symbolizes the idea of perseverance leading to riches — rather like people climbing the social ladder, said Yutaka Suga, professor at the Institute for Advanced Studies on Asia at Tokyo University.

Today, koi is big business and Japanese exports are booming — 90 percent of domestic production is exported and sold at auction.

In 2016, Japan exported a record 325 tons of koi carp, generating turnover of 3.5 billion yen ($31 million), an increase of almost 50 percent from 2007, according to Japan’s agriculture ministry.

Like racehorse owners, many foreign owners leave their prized possessions in their home Japanese farms so they can compete in the most prestigious fishy pageants, which are only open to domestic rearers.

One such owner, Chinese koi collector Yuan Jiandong, was in Tokyo to cheer on some of his own carp.

“It’s not a way of making money. It’s a way of spending it for fun,” laughed the pharmaceutical boss from Shanghai.

But owning koi is so much more than a vulgar display of wealth, he said.

“When you see these beautiful fish gliding around in your pond, you forget the stresses of daily life and you find peace of mind.”

And you can’t put a price on that.