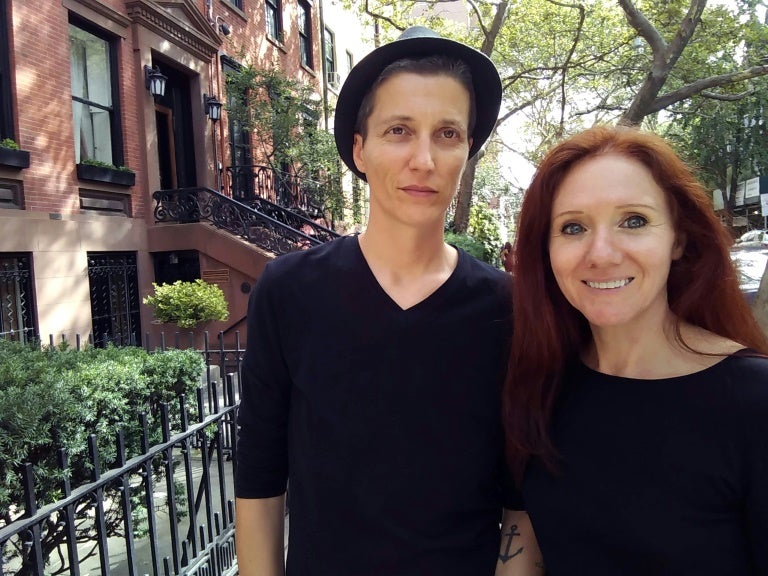 This handout photo provided by Fleur Pierets (R) shows her in August in New York with Julian P. Boom (L), whose terminal cancer has now shattered the two artists' dream of celebrating their gay marriage in 25 countries where it is now legal. Image: Fleur Pierets - JF PIERETS/AFP

They planned to say “I do” in 25 countries in a joyful celebration of gay marriage. But now the lives of two women artists have been shattered by a diagnosis of terminal cancer.

Instead of planning their fifth wedding in Spain as part of a global performance artwork, Belgian Fleur Pierets, 44, is now nursing “the love of her life”, Dutch woman Julian P. Boom, 39, as she gradually slips away.

After first getting legally hitched in New York in September where they had been living, Boom and Pierets had planned to work their way through all other countries where gay marriage is allowed. Symbolic ceremonies were then held in Amsterdam followed by Antwerp.

But after their fourth marriage in Paris’s Hotel de Ville on November 7, Boom “felt very dizzy and I had to support her down the stairs of city hall,” Pierets told AFP in an email.

Boom was feeling so ill the couple decided to rest at the home of Pierets’s mother in France where, after Boom fainted several days later, scans in the local hospital revealed the grim news.

“It turned out that (Julian) has numerous tumors in her head and around her heart. The doctors are giving her three more months in which she will lose her capacity to speak and to remember things until she will slip into a coma,” Pierets said.

“Things are going really fast. She has lost her memory completely and she’s unable to move her limbs—since her brain ‘forgot’ that they are there,” she said in an email to AFP.

“The doctors told me that every time she goes to sleep, there’s a possibility that she won’t wake up. It’s a nerve-wracking nightmare.”

The couple, who sold everything to finance their plans, were aiming to make a documentary, as well as a photo exhibition and a book about their adventures, which they had called Project 22.

Since launching the project, Australia, Germany and Malta have all legalized same-sex unions while Austria’s top court said in December that gay couples will be able to marry from 2019.

Their project seemed to capture the imagination and there had even been early plans for them to meet popular US television host Ellen DeGeneres.

“It was one of Julian’s dreams to meet Ellen. Unfortunately, that will never happen,” said Pierets.

During their “last lucid conversation” a month ago, she promised her wife that she will, however, write the book. “It will keep me busy and will give me a purpose after she is gone. Otherwise, I don’t know if I would’ve been able to go on,” Pierets said.

“I was looking so much forward to marrying her in those 25 countries. I’m going to miss her so, so much.”

Friends have now launched an appeal on the Project 22 website to help Pierets meet the costs of Boom’s palliative care, which are not covered by their insurance.

“Not only will she lose the love of her life, she shall have to face major bills once Julian is gone,” said friend Bart Davenport. NVG