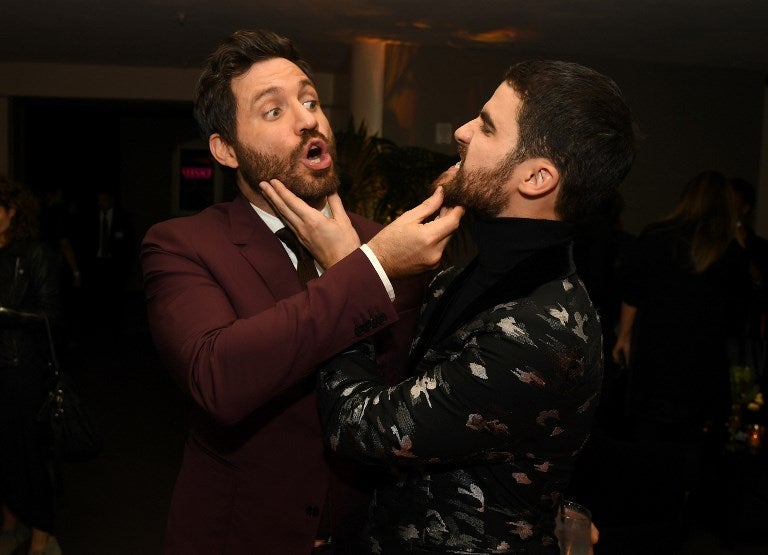 LOS ANGELES, CA - JANUARY 08: Actors Edgar Ramirez (L) and Darren Criss pose at the after party for the premiere of FX's "The Assassination Of Gianni Versace: American Crime Story" at the Hollywood Palladium on January 8, 2018 in Los Angeles, California. Kevin Winter/Getty Images/AFP

MILAN, Italy — The Versace family on Wednesday slammed a new television series on the murder of fashion giant Gianni Versace, saying it was based on nothing more than “work of fiction”.

The show, filmed largely at Versace’s Miami waterfront mansion where the stylist to the stars was gunned down in July 1997, is set to be released next week in the United States and Europe.

“The Versace family has neither authorized nor had any involvement whatsoever in the forthcoming TV series…  which should only be considered as a work of fiction”, it said in a statement.

“The company producing the series claims it is relying on a book by Maureen Orth, but the Orth book itself is full of gossip and speculation,” it said, in reference to “The Assassination of Gianni Versace: American Crime Story”.

“She has no basis to make claims about the intimate personal life of Gianni Versace or other family members. Instead, in her effort to create a sensational story, she presents second-hand hearsay that is full of contradictions,” it said.

The show’s executive producer Ryan Murphy told Variety magazine that Orth’s book was “a very celebrated, lauded work of non-fiction that was vetted now for close to 20 years”.

The family challenges in particular Orth’s claim that Versace was HIV-positive.

“Not because it would be something shameful, given that Gianni was one of the first to deal with this problem, to organize charity events and to make personal donations” to the cause, his sister Donatella told Italy’s La Repubblica daily.

But because “in making her lurid claims, she ignores contrary information provided by members of Versace’s family, who lived and worked closely with him and were in the best position to know the facts of his life,” the family said.

Donatella, who took over the brand on her brother’s death, said she was “amazed that after so many years we still lack respect for the dead, we want to create a scandal around someone who can no longer defend themselves”.

The designer said she had not seen the show. Murphy hoped she would, telling Variety: “If she did I think that she would see that we treat her and her family with respect and kindness.

“She really is a feminist role model in my book, because she had to step into an impossible situation, which she did with grace and understanding.”

He was 50 when he was killed by Andrew Cunanan, whose motives remain a mystery.

Cunanan — portrayed by actor Darren Criss — had killed at least four other people on a bloody journey before reaching Miami Beach. He committed suicide a few days after slaying Versace.

Although most filming took place in Versace’s Florida mansion, part of it is being shot at the Fox Studio in Los Angeles, where the luxurious home was recreated to the last detail, including its Greco-Roman paintings.