Now Pinoys can have their snow | Inquirer Lifestyle ❮ ❯ 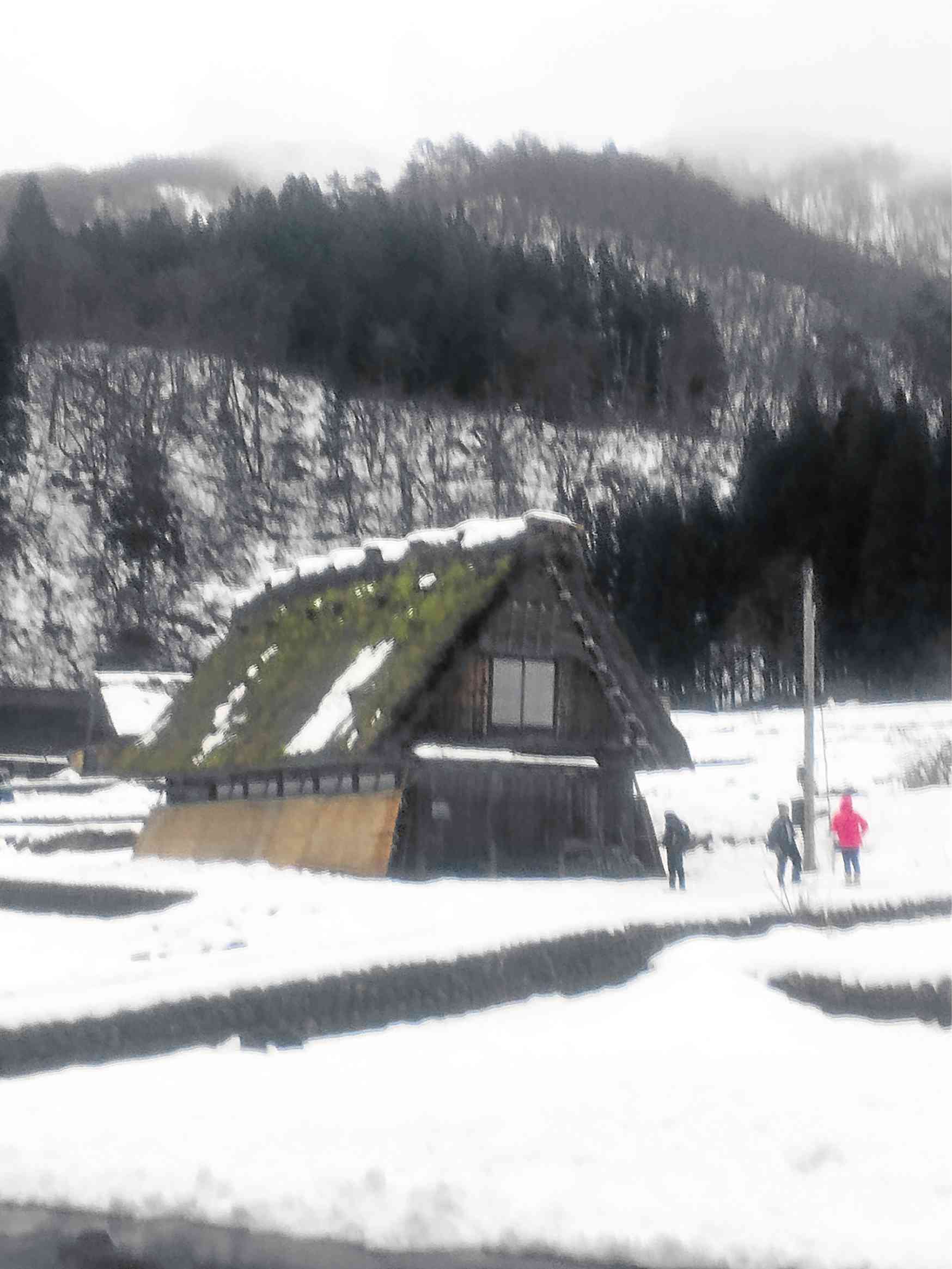 An old “gassho” house in Shirakawa-Go, a Unesco World Heritage site –Photos by Alya B. Honasan

Now Pinoys can have their snow

Time was when the only way  Filipinos—especially kids who had never built a snowman—could experience snow was to head west. One great alternative is now just a three-and-a-half-hour flight and a quick train or bus ride away.

The base is the city of Nagoya, Japan, the take-off point to Shirakawa-Go village in neighboring Gifu Prefecture, a Unesco World Heritage Site since 1995. The wooden and thatched-roof farmhouses here, believed to have been built in the 17th to 19th centuries, are treasured examples of gassho-style architecture, with the steep roof resembling hands folded in prayer.

Despite the flammable construction materials—a modern concession: high-tech dedicated sprinklers beside each structure!—the houses are exceptionally strong, to withstand wind and snow. Our group got to see just how strong on a visit to the 300-year-old Wada house, with its thick beams and spacious interiors built mainly with the tongue-and-groove method—and without using a single nail. The thatched roof is replaced every 30-40 years, with locals helping out bayanihan-style.

By day, the view from the Shiroyama Observation Deck shows a gorgeous village and rice fields blanketed in snow; in January and February, the homes are delightfully lit up at night, making for a snowy postcard scene. Shirakawa-Go is a good day trip from Nagoya, although a few accommodations are available.

For more hardcore snow adventures, a three-hour drive from Nagoya is the Shinhotaka Ropeway in Takayama, a short but steep cable car ride to the top of the Hotake Mountain Range, also called Japan’s northern alps.

It’s a 1,000-m climb, using the country’s only double-decker gondola car. When there’s less snow (generally June to September), people take off on hikes, and various trails can take between 90 minutes and nine hours to negotiate.

On our visit, however, we got more winter than we hoped for, with temperatures plummeting to -14 degrees Centigrade, and a mini snowstorm that closed the double-decker gondola for the day. A 200-m climb in a regular cable car was still possible, though, taking us to a visitors’ center and an outdoor open-air hot spring foot bath for brave visitors to dunk their bare feet in—be ready for the bitter cold after the soak!

With a fresh blanket of snow, the place was, indeed, breathtaking. The Hotel Hotaka is a good choice for a winter getaway, because of its hot spring onsen—and it’s just a few steps from the ropeway entrance.

For a small-town feel that’s entrancing in the winter, and minus the usual touristy crowds, Hida-Furukawa in Hida City is a short drive or a 30-minute train ride from Takayama. Scenic shrines, traditional architecture from the Edo Period, hot bowls of soba noodles, and breweries serving delicious sake, the Japanese rice wine, await; the spring water running through the city is credited for the famed libation’s unique taste. In warmer months, koi (carp) swim in the canals; in winter, they’re actually taken elsewhere to protect them from the cold.

The town’s biggest—and noisiest—draw is the annual Furukawa Festival, held every April, when Japanese men, dressed only in modest white loincloths, beat their huge  Okoshi-daiko drum to call down the gods. The parade that follows features nine stunning floats that have been in use for as many as 400 years, lovingly created and maintained by local artisans, decorated with marionettes and carvings, and kept in storage in dedicated warehouses.

The rest of the year, floats are on display in a local museum, where a 3D film allows off-season visitors like us to experience the festival.

When you’ve had your fill of the snow, the best part is, there remains a wealth of other experiences in cool (not freezing) weather.

In Takayama, with its lovely views along the Miyagawa River, there’s the Jinya, a former government office built in the Edo Period, and a fine historical record of bureaucratic life in the era. Kids can visit crafts centers in Hida-Takayama and assemble a sarubobo doll, traditionally made by farm folk out of old kimono fabric to entertain youngsters.

In Gujo-Hachiman, you can actually try your hand at making those uncanny wax food replicas Japan is known for; at one factory called Sample Kobo, we made fake tempura and lettuce that looked truly good enough to eat.

In Gifu’s neighboring Achi Prefecture is the city of Inuyama, home to a national treasure that is one of 12 remaining all-original castles in Japan, the small but elegant Inuyama Castle, built in 1537. Worth noting is the castle’s “protector,” a dead cedar tree several hundred years old, which was struck by lighting and believed to have spared the castle from burning to the ground. People actually come and pray to the tree to this day.

Also in Inuyama is Meiji-Mura, a curious, expansive open-air museum featuring transplanted western structures, including two churches and the original Imperial Hotel, which stood in Tokyo from 1923 to 1967. The architect? No less than American master Frank Lloyd Wright.

In Nagoya, we visited the historic and fascinating Nagoya Castle, first built in the 16th century and known for its political importance as an outpost of the powerful Tokugawa clan. Its symbol is equally imposing—the kinshachi, a mythical animal with a tiger’s head and a fish’s body, covered in 24-karat golden scales, which one ambitious fellow actually tried to steal decades ago (he was caught and jailed).

Huge stones were manually hauled to build the landmark, and an ingenious interactive exhibit allows visitors to simulate the effort. For some breathtaking greenery and koi feeding, the Tokugawa Garden is another gorgeous stop.

For food tripping, sample the enormous king crab, offered in restaurants like Sapporo Kani Honke in Nagoya. As a wise option for outbound passengers with early flights, the sparkling Nagoya Chubu Centrair International Airport, a five-star regional airport with a train station on site, also houses two hotels and an onsen (!), and offers shuttle rides to the nearby compact Aeon Mall for last-minute shopping.

Aeon has a giant maneki-neko (that ubiquitous waving cat) welcoming shoppers at the entrance. It has the usual favorite shops and wonderful eateries, including a modern kaiten (conveyor belt) sushi restaurant we visited for our last dinner—just the place to end a fun winter holiday.