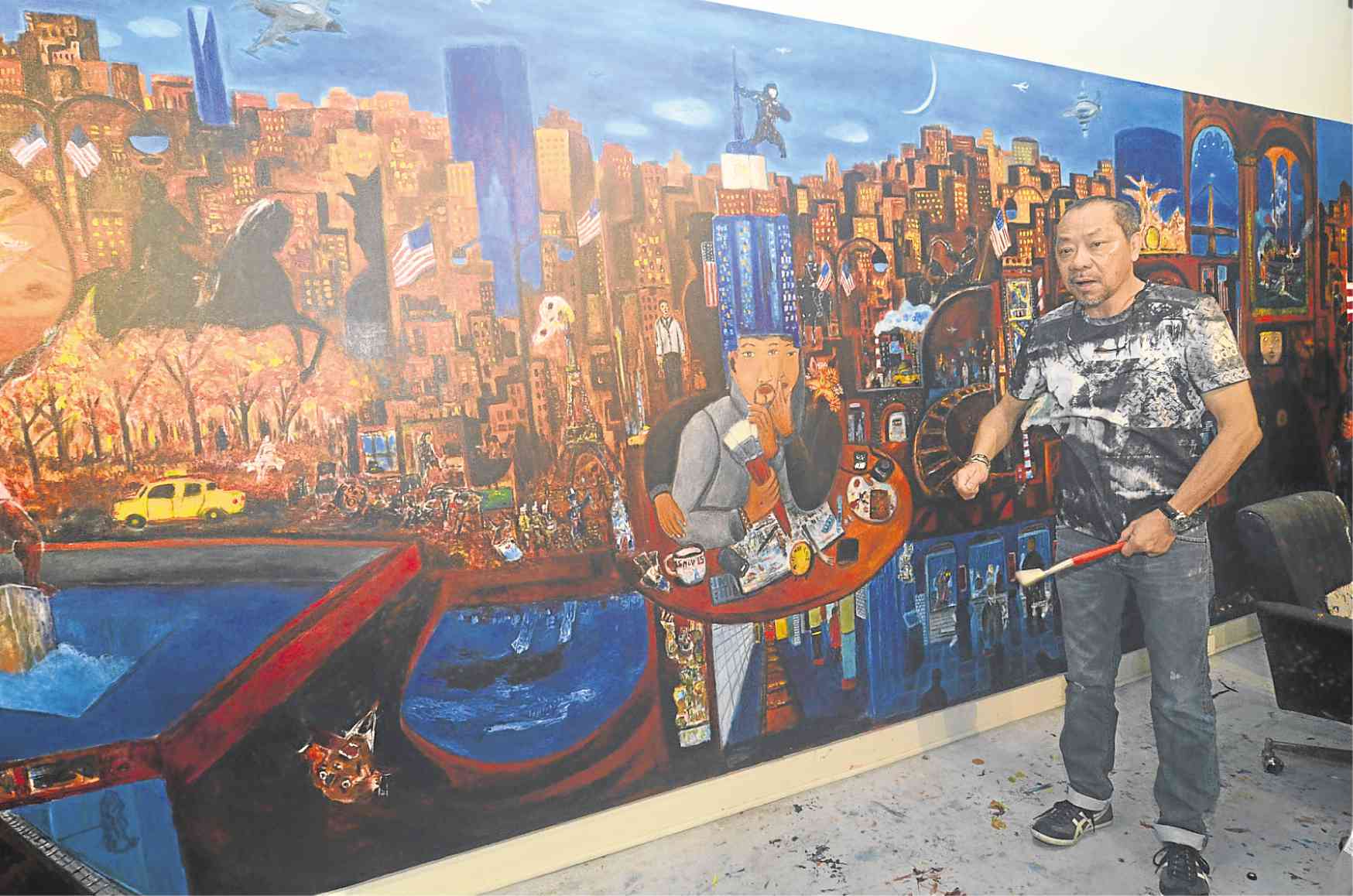 People of Negros are known revolucionarios—from the Spanish colonial period, when its leaders like Aniceto Lacson put up the Republic of Negros, through the martial-law years, when religious like Bishop Antonio Fortich advanced the preferential option for the poor.
The spirit of radicalism has saturated even its arts, from the theater work of Jess Ayco to the cinema of Peque Gallaga.
The socioeconomic life of the province, between extreme luxury and brutalizing labor, has turned it into such a hotbed of rebellion that when Capizeño artist Norberto Roldan came to settle as an hacendero in the 1980s, he soon cofounded with Negrenses Nunelucio Alvarado and Charlie Co the socially and politically progressive Black Artists in Asia.
In his house-atelier in Talisay City, Co smilingly recalls those years. He says he now has a heart condition and was at one time on the verge of dying, but the youthful radicalism inherent in his art hasn’t waned.
Visitors in his studio can see this in the dozens of canvases and sculptural pieces he is simultaneously working on. He even has the chutzpah to incorporate in his work his ailment as symbol, motif or theme.
Though he admits he has created in his low moments a series of pieces in achromatics and cool harmony, over all it’s a bold colorism that’s as incandescent as, but so much brighter than, the dark tonality of Alvarado’s Expressionism.

The Church in Negros, steeped in the lives and lore of the sacadas (migrant sugarcane workers), naturally became politicized.
In 1967, only a few years after the 2nd Vatican Council in 1959, the Chapel of Cartwheels was opened for these laborers at Hacienda Rosalia in Manapla town. It features artworks, architectural and interior designs that were considered avant-garde at that time.
It was constructed with siding composed of connected cartwheels, V-cut type planks, shiplap paneling, louver boards, with a steep, cone-shaped roof topped with a cross. It was built with available equipment and materials (discarded farm implements and household items), and meant to reflect the culture and sentiments of the people—a church they could easily relate to.
It’s just a small chapel but replete with symbols. The wooden wheels, which provide more ventilation, are from carts used in transporting sugarcane from field to mill. Mortar has been turned into a font for holy water, pestles into candle stands. Benches are of slabs of recycled old wood.

The rose windows symbolizing the Holy Trinity are cartwheels adorned with shards of multicolor pop bottles (in lieu of stained glass). A primitive Christ figure on a cartwheel (instead of cross), resembling the Vitruvian Man, is suspended over an altar table of rough-hewn block of stone.
This looks like a place of worship of early Christians.

Perhaps nothing is more obviously symbolic in this social volcano that is Negros than the Chapel of St. Joseph the Worker, popularly known as the Church of the Angry Christ.
Located in the 7,000-hectare compound of Victorias Milling Company (the world’s biggest integrated sugar mill and refinery), the chapel was designed by Czech architect Antonín Raymond, acknowledged as the founder of modern architecture in Japan.
It was built in 1948, recognized as “a touchstone in the development of Philippine religious art,” and declared an Important Cultural Property in 2015.

It is the only church in the province using Filipino liturgical art, its decoration and iconography already Filipinized long before Vatican II—from the mosaics on the façade and baptistry to the numerous icons, to the murals at the apse and on the external walls (exposed to the elements, thus fast deteriorating).
Belgian liturgical artist Adelaide de Bethune rendered the mosaics of pop-bottle shards. Local artist Benjamin Valenciano created wooden statuary of brown-skinned saints and biblical characters in traditional Filipino attire, including the Stations of the Cross wherein the Romans are dressed up in Philippine Constabulary uniform.

Commissioned to do a mural as centerpiece for the altar was Alfonso Ossorio, an unheralded Filipino master artist and scion of the sugar mill’s founder, early patron of Jackson Pollock and Jean Dubuffet, and illustrator of Paul Tillich’s travel diary.

Ossorio created an Expressionist masterpiece of an enormous figure of Christ amid a flaming imagery. The subversive iconography was loathed at that time as it featured a fierce-looking, craggy-faced Christ amid psychedelic colors instead of the gentle, compassionate visage in a soft glow most Catholics were used to.
It is a multilevel, multilayer mural of fluid images spreading from the side altar to the crossbeams and ceiling, with some portions unseen by most people. Ossorio had strategically painted at the apse so that during the morning Mass, as the sun comes out, strong light from above strikes the celebrant standing amid a vision of the Last Judgment.

An exemplar of the Negrense’s love of progressive art and its practical application can be appreciated in the Generoso Villanueva Mansion in the capital Bacolod, known to locals as the Boat House and to family as Daku Balay.
Built in 1933 of poured concrete and local materials, the 5,000-square-meter, three-story structure looks like an ocean liner stranded in the garden. It has curved balconies, spiral staircase, curvilinear walls and hallways, porthole windows, roof deck, parapets—a majestic showcase of Art Deco.
It was the first building in Negros to have an elevator, and the tallest in the city until Philippine National Bank built its headquarters in 1959. It is considered the most beautiful Art Deco house in the country.
Art Deco was then the rave, its design elements saturating not only the residential district but also civic buildings, even the lumpen quarters.
In Central Market, the only structure that had survived intact from the fire that razed downtown Bacolod in the mid-’80s is a wooden government building that features motifs that are decidedly Art Deco, still lovely despite the drab surroundings.

The artistic inclination is just as strongly manifest in Negros’ art collectors, often whimsical but no less passionate than its artists.
Witness the Christmas Village of Fine Arts professor Bamboo Tonogbanua, a mind-
boggling collection he started in his Bacolod residence 22 years ago. Or the jaw-dropping doll collection at Negros Museum, gathered from over 60 countries for 30 years.

Probably the peak is J&L Marañon Arthouse, near Bacolod Metrodome, often referred to as the Weird House. The collection of London-based psychiatric nurse Jesse Marañon has been called “the epitome of kitsch and eccentricity allowed to run wild.”
On the ground floor, the visitor is whelmed by statuary of titanic figures human, animal or hybrid. Each sculpture reportedly took three months to create, the designer raiding everything from the Qin Dynasty to pre-
Hispanic Philippines, from Pharaonic art to Greco-Roman to the Renaissance treasures of the Vatican.
Familiar figures become mysterious objects when set out of context: A Hellenic male torso in a wire cage resembles a mutilated victim of SM bondage. The Pietà encased in an aquarium looks creepy.
On the second floor is the grand salon, capacious and thronged with embellishments galore. Numerous chambers contain a superabundance of ceramic figurines, memorabilia from travels, porcelain and glassware, antique books, ceiling murals, copies of ancient paintings.
All three floors of the building have 16 CCTVs. One is bemused by the difficulty in making an inventory of these stuff—but how much harder to clean them every day.
The whole collection has been described as “an assault on your visual sense and intellect. If you’re a fan of the strange and esoteric and love conspiracy theories and hidden meanings, this house is a must-visit.”

Another obsessive collector is floral designer Tomiko Casiano, who opened Laguerta Home of the Vintage Glasses Museum in Barangay Sum-ag on Dec. 12, 2012.

Simply called the Glass Museum, it is said to be the first such in Asia. It houses over 3,000 glass and crystal pieces including dinnerware, decanters, Victorian lamps, commemorative plates and decorative objects of various colors and designs. It is reportedly the largest collection of Depression and vintage glasses outside the United States.
The translucent glassware was made by over 20 manufacturers in over 100 patterns around the time of the Great Depression (1904-1940), and distributed free or at low cost in the US and Canada. They’re already scarce on the open market, and some have become rare they sell for hundreds of dollars.
They come in varied hues and shades: crystal-clear, milk-white, pure white (monax), pink, amber, green, opaque pale green (jadeite), pale blue, opaque pale blue (delphite), ultramarine, cobalt-blue, amethyst, opalescent, black, pearlized mustard, canary-yellow, royal ruby and fire. This museum has them all.
Casiano says he had been collecting the glasses for nearly 30 years while living in West Los Angeles. He shipped them to the country in 66 boxes through two years.

Royalty and the sacred

Several pieces stand out, such as the Carnival glass. Casiano is especially proud of his grape bowl of opalescent green and the Persian medallion centerpiece bowl, both featured on the cover of an encyclopedia of Carnival glasses.
Among other outstanding pieces are the fairy lamp of Baccarat crystal in ethereal blue; the night glass; the cobalt-blue, hand-painted Renaissance drinking glass; the Nancy Reagan and Queen Victoria dinner bells.

“Anything na may teardrop, that’s Victoria, royalty ’yan,” Casiano points out the distinctive teardrop motif.
The museum also has Korean art glasses, porcelain and terracotta pieces, vintage glasses with sterling-silver overlay.
Casiano’s collection extends beyond this museum. He has an escayola collection of 95 pieces of santos, crucifixes and other sacred objects, which he has entrusted to the Church of St. John Nepomuceno (built 1858, also in Sum-ag; older than Bacolod Cathedral, built 1876).
These plaster figures were discards, worn-out icons, damaged objects that Casiano had gathered from various homes and churches. He calls them his collection of mutilated religious art.
Art, in Hegelian term, is a material embodiment of the spirit, and these people are just “seeking out forms to physically manifest their inner tensions and resolutions.” But the spirit overflows and can hardly be contained within its material embodiment.