Brooklyn Beckham up close: On his own, minus ‘mum and dad’ | Lifestyle.INQ ❮ ❯ 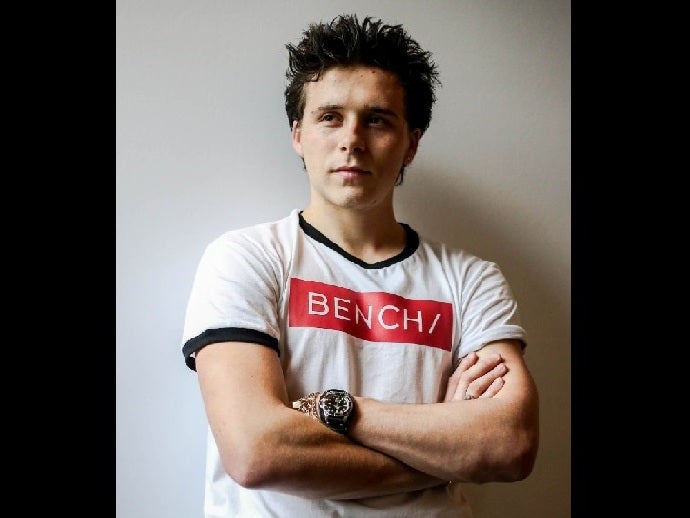 Brooklyn Beckham up close: On his own, minus ‘mum and dad’

Despite the early call time, he arrived with hair artfully mussed, ready to talk about his role as the newest Global Benchsetter for Bench and his book, “What I See” (Rizzoli, 2017).

The 18-year-old’s trip to the Philippines is his first without either of his parents.

“I’ve always wanted to come here. My dad keeps on saying how he loves it here and that if I ever have the chance to come over, I should grab it,” Brooklyn said.

His father’s most recent trip was in 2014, when he visited families affected by Supertyphoon Yolanda. In a digital diary he kept during the visit, the Unicef Goodwill Ambassador recalled how he “didn’t hesitate when Unicef offered me the opportunity to visit Tacloban.”

Seeing the destruction was eye-opening, but David added that it was “the resilience of the Filipinos I met that will stay with me for the rest of my life.”

Brooklyn was determined to experience and capture as much of the country and its people during his short visit last week.
For dinner last Friday, the Bench team took him to Tagaytay, where he took pictures of Taal Lake from a distance, as well as “the small towns we passed through.”

He even managed to sneak in a few shots around Shangri-La at the Fort after breakfast on Saturday.

The next day—after a full day spent granting interviews, visiting the Bench stores at SM Megamall and SM Mall of Asia, signing copies of his books, and gracing the opening of the first Bench Café at the Bench flagship in Bonifacio Global City—he went on a bike tour of Intramuros with his team and his friends from Bench.

“I first learned about Bench while skating four years ago. I was wearing one of these shirts,” he said.

As a regular skater, Brooklyn favors simple round-neck tees and loose bottoms—the better to move around and make those hairpin turns in.

“I found the shirt I was wearing really comfy, and so I did some research, got some bottoms as well. They’re my style,” he said.

Brooklyn revealed that he and his dad sometimes tell each other what to wear: “I borrow a lot of his clothes.”

On Brooklyn’s left hand, he wears an initial ring with the letter C. “C is for Chloe,” he said, the first name of his girlfriend, actress Chloe Grace Moretz.

On his right wrist is a nail-shaped bracelet, a gold Juste un Clou from Cartier, one of the first things he bought for himself. “My mum bought my dad one 10 or 15 years ago. I loved it, so I bought one for myself.”

He admitted that, growing up, he was never really aware of how famous his parents are.

“I always just saw them as mum and dad. I never really understood why people got all excited or took photos of them. It was only when I was 13 or 14 that I understood why,” he said.

Brooklyn credits his father for introducing him to and getting him hooked on photography.

“When I was smaller, my dad would take photos of me. He’s always been interested in cameras. He showed me how to use one,” Brooklyn said.

His first camera was a Fuji instamatic. “It was a tiny little thing,” he said. Now, he uses a Leica and a Hasselblad.

“What I See” is a collection of photographs, mainly of his family (they’re four siblings) and friends.

Brooklyn’s favorite image? “It’s toward the end of the book—my girlfriend on the beach. It’s my favorite not just because she’s my girlfriend, of course, but because of the composition of the photo, how I placed it. It’s different from all the other ones,” he said.

Brooklyn’s other favorites are those of his family: his baby sister Harper Seven, running toward him in a vineyard in Napa Valley; younger brother Romeo looking straight into the lens, clutching a bouquet of flowers for Harper; and David seated at a bar, newsboy hat on his head and tattooed arm prominently displayed.

Brooklyn said his photos were “hardly edited,” although choosing which ones to include in the book took some time.

“Obviously, it was my decision which ones to put in, but it was the family ones where my mum would say, ‘Oh, don’t put that one, choose this instead.’”

Although he credits his father for teaching him the basics, Brooklyn said he has always been interested in photography. During shoots, he would observe how the photographer worked.

“It’s so cool to be in charge of the whole shoot, telling people what to do, how to stand. I found it amazing. So when I started taking my own photos, I fell in love with it.

“My photos are not very staged. They’re quickly taken. That’s kind of what I like to do,” he said.