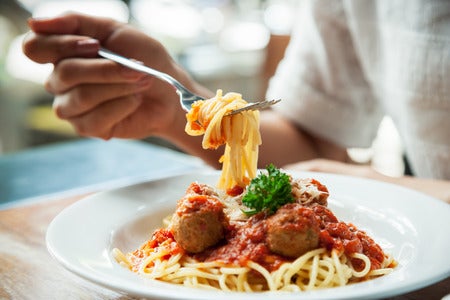 The average British dinner lasts just 21 minutes amid increasingly busy and conflicting schedules, which usually got in the way of dinner or prevent people from eating together, a survey published on Saturday showed.

A total of 55 percent of families have a smart phone, computer or television present when eating together, the survey for supermarket chain Co-op Food also revealed, while a total of 57 percent of respondents said they do not eat with their family every night.

Around half of Britons would like to challenge the status quo, with 47 percent saying they would like to have a meal at home or with family more often.

“Families continue to recognize the social importance of sharing food and identify eating together as an activity that most brings them happiness and a sense of togetherness,” said Patrick Alexander from the Oxford-based Social Issues Research Center.

“What eating together means, however, is changing. Screen time during meal times, for example, is now common for the vast majority of families,” he added.

The survey found 20 percent of households do not have a dining table.

A three-course meal at home is now very rare, with just two percent of people preparing such a feast on a regular basis.