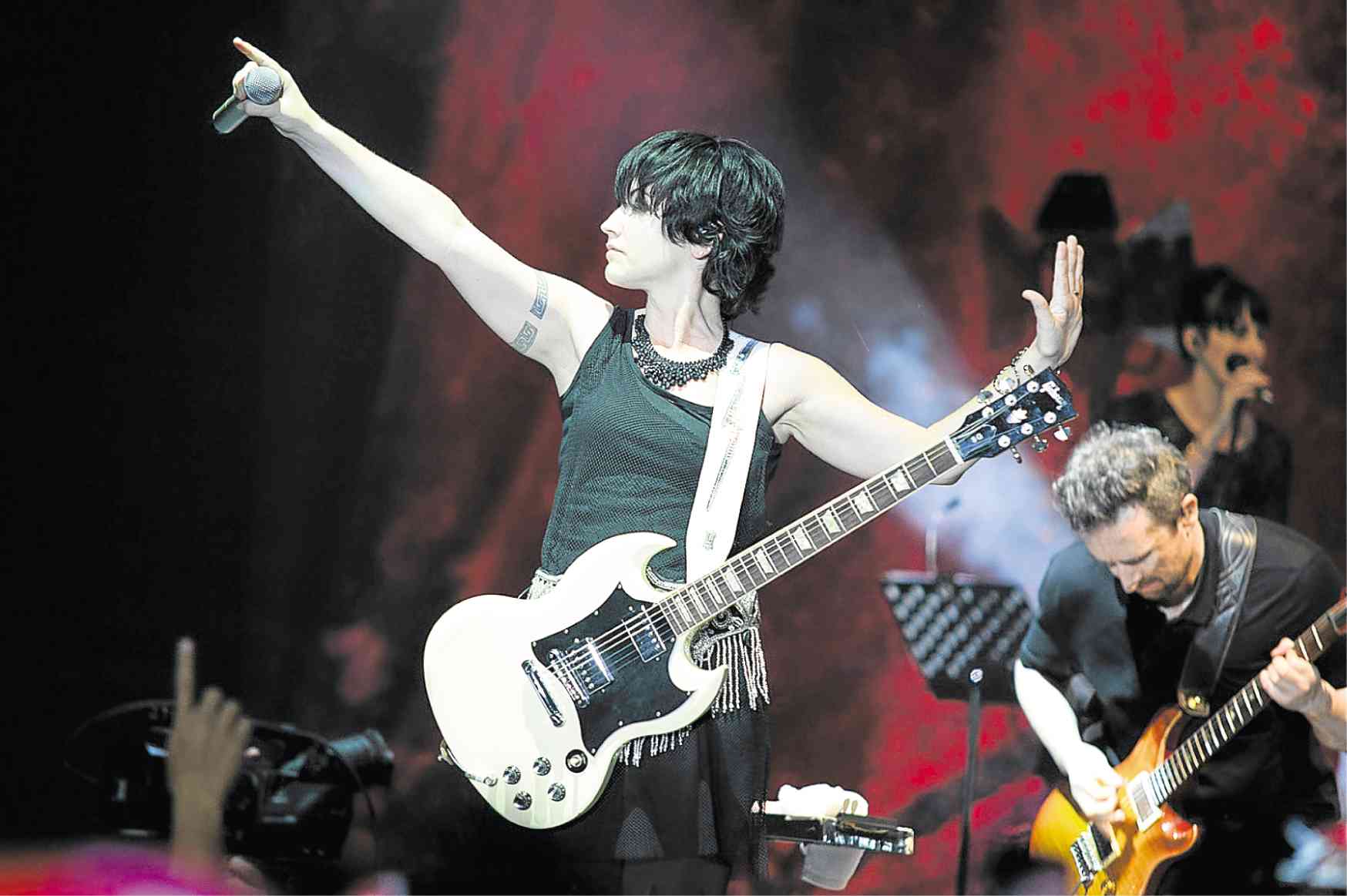 Dolores O’Riordan performs with The Cranberries in Manila in 2012. —PHOTOS BY MAGIC LIWANAG

People deal with grief in different ways, and despite what many believe, grief that stems from celebrity deaths is no less difficult. Many of us music fans have scarcely moved on from the loss of the likes of Linkin Park’s Chester Bennington, Tom Petty, Chris Cornell and SHINee’s Kim Jonghyun, and now, the new year greets us with a new name on the list of late greats.

News of The Cranberries lead singer Dolores O’Riordan’s death hit us hard last Monday. All we know at this time is that she had been in London with her bandmates for a short recording session, and that her body was discovered at a hotel, the cause of death yet unknown but not suspicious.

Sure, what transpired next was relatively typical—an artist suddenly passes away, record sales shoot up, and an outpouring of love and sorrow floods social media from fans and fellow artists alike. Then, the inevitable mockery.

“Bakit ka ba sobrang affected? Close kayo?” come the snide comments, as the shock of Dolores’ death settles into that kind of sadness that could only be understood by anyone who’s ever been a diehard fan of anything.

It’s a legit question, yes. Even I ask myself that sometimes. Did I know her personally? No. But she was a rock icon, and the ageless vocals behind some of the songs that I and my peers had grown up on. Through those songs, Dolores became a part of my most cherished memories, and that was enough for me to mourn her untimely passing.

I was lucky enough to have met her back in 2012, when The Cranberries came to Manila for its “Greatest Hits” tour. Dolores was petite and reserved, and she hardly spoke. But her presence was every bit as strong and intimidating as her legendary vocals, almost regal even, and she made me nervous. So nervous, in fact, that I’d stumbled my way through our interview and forgotten to turn my recorder back on at one point (much to my horror later on).

But when I brought out my old cassette tape of one of their albums, Dolores’ serene expression softened into a nostalgic smile while her bandmates broke out into surprised laughter. I’ve had it since grade school, I sheepishly told them as they each signed it, hoping they wouldn’t notice the girly name sticker with the heart balloons that looked so out of place on a black ’90s rock album sleeve.

I still have that tape with me, along with a bunch of others signed by artists I’ve had the absolute honor of meeting in person. But more than just another brief celebrity encounter and collector’s item to hoard, what I am most grateful for is the chance to thank these people for being a part of our lives growing up, and even now as grownups. And I am glad I was able to do just that, with Dolores, in 2012.

I hit play on The Cranberries’ hits as I write this, and I let the songs bring back a lot of fond but nearly forgotten memories via that unmistakable Irish yodel of hers—her vocals gentle and ethereal one minute, ferocious and powerful the next.

I remember listening to “Dreams” on my Walkman during family road trips, staring out the car window and imagining running free through lush green fields under bright blue skies in the northern countryside.

I remember headbanging to “Zombie” and “Salvation” with the volume turned up in an effort to release some teenage angst. And secretly crying to “Ode To My Family” after family squabbles while dreaming of happier, drama-free days.

And, gosh, how could I forget making ugly-cry faces over thoughts of high school crushes whenever “Linger” starts playing? Oh, that song never gets old—those melancholy opening chords, Dolores softly humming along. Then that iconic, hard-hitting refrain.

I couldn’t help but laugh at the memory, even as the last track on my playlist, “Dreaming My Dreams,” makes me choke and tear up a little. At this point, for me, there’s no song more fitting for closing a tribute than this hauntingly beautiful acoustic love song.

Thank you for the memories, Dolores. Sleep well, and sweet dreams.