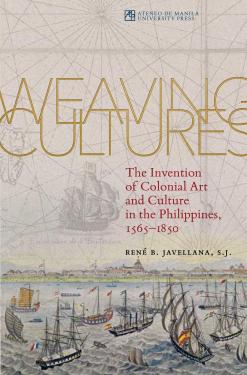 The book “Weaving Cultures: The Invention of Colonial Art and Culture in the Philippines, 1565-1850,” by Fr. Rene Javellana, SJ, chronicles the growth and advancement of the nation based on the sender-receiver model of communication in which direct or indirect exchange of influences shaped what the country is today.

Aside from it being a history book, “Weaving Cultures” is an encyclopedic work on the country’s arts and culture, discussing precolonial Philippines, its built and intangible heritage, biology, communication and Spanish colonization in general.

Javellana delves into the links between the indigenous cultures of the Filipinos and the Hispanic culture they’ve acquired as shown in their architecture, culinary arts, horticulture, literature, music, and the visual and performing arts.

The interchange of ideas and the interaction of cultures resulted in what is now called as Philippine culture; these are developments which can be compared to the Unesco World Heritage sites of the Andean Road System Qhapaq Ñan in South America and the Silk Road in Asia, where countries benefited not only from trade but from exchange of ideas and knowledge between the ethnic groups involved.

Published by the Ateneo de Manila University Press, “Weaving Cultures” discusses the role transportation and communication have played through the Galleon Trade in fostering literacy in Spain and its colonies.

It also tackles the introduction of foreign flora and fauna in the country, such as cows and oxen and chico, guava, and kamote (sweet potato); they now form part of Philippine natural history.

Furthermore, it discusses Spanish colonial town planning based on the grid pattern, still evident in a number of towns and cities in the country; examines the introduction by Spain painting and sculpture, classical forms later indigenized by the Filipinos in sacred art and buildings; cites the introduction of music and the performing arts, in which Filipinos now excel in; explores the “reframing” of the native languages by “Latinization”; and tackles the reinvention of the colonial dress into the baro’t tapis and salawal.

Javellana notes that outside influences resulted in the Filipino cultural modification, a paradigm shift.

Thus, “colonial exchange and the building of colonial culture” Javellana notes, “are all about meeting and connection, mixing or remixing, and reframing and reinterpreting, further explaining that these concern “communication across peoples and across cultures over time, which in the process, reform the world.”–CONTRIBUTED