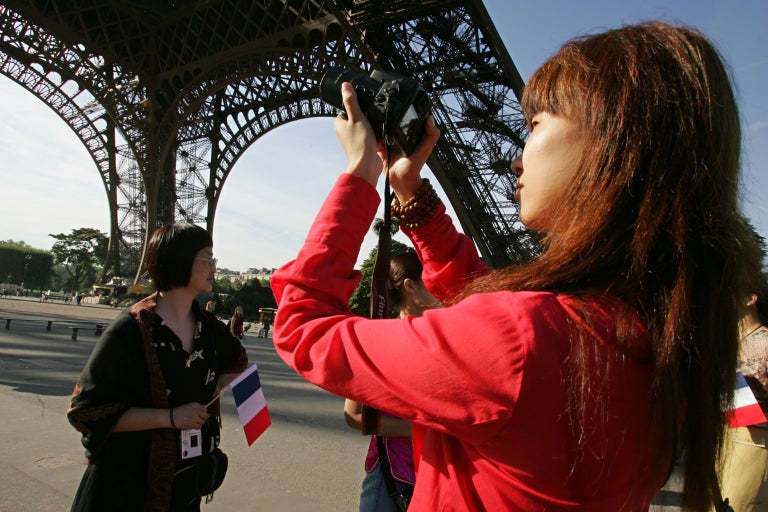 According to European Travel Commission data, France is the number one desired destination in Europe for Chinese tourists. Image: AFP/Daniel Janin

Chinese tourists are big spenders and with the numbers visiting Europe set to soar by nearly 70 percent over the next five years, the countries of the Old Continent are rolling out the red carpet to make the guests feel welcome.

A total 12.4 million Chinese, mostly in guided tour groups, came to Europe in 2017, according to the European Travel Commission. And the Chinese Tourism Academy (CTA) is expecting the number to reach 20.8 million by 2022.

“A few years ago, the Chinese came to Europe solely to do some shopping. Now, they’re increasingly keen to get know the culture and the countryside,” CTA president Dai Bin told AFP, speaking in Venice, at the launch of the year of tourism between the EU and China.

Festivals, cooking courses… “they want to have personal experiences and visit areas where they don’t see any other Chinese,” said ETC’s executive director, Eduardo Santander.

“They like the cuisine, the music, the blue skies… most of them come from the coast, where pollution is extremely high,” Santander said.

And some were surprised that they can “breathe without coughing,” he added.

China is the world’s biggest market for foreign tourism; with 129 million Chinese holidaymakers traveling abroad, they account for one fifth of the total number of tourists globally.

And they spend more than twice the amount that, say, United States tourists do: $261 billion in 2016 compared with $123 billion.

“You can make them very happy by offering them a glass of hot water,” he said, noting most Chinese families drink water at that temperature rather than cold.

Chinese language television stations and good wifi in hotel rooms are a good idea while payment methods favoured by the Chinese, such as UnionPay, the only credit card issuer in China, WeChatPay or Alipay are a must.

“We hope Europe will make is easier for Chinese to get a visa,” he said.

“In a number of eastern European countries, for example, it’s easy. But it’s very difficult in others. And when Chinese tourists visit Europe, they want to visit several countries, not just one,” Dai Bin said.

By reciprocation, China would become “more flexible when granting visas and Europeans can stay in Beijing or Shanghai for 144 hours — or six days — without a visa,” he promised.

According to ETC data, France is the number one desired destination in Europe for Chinese tourists, with 61 percent of visitors hoping to go there, followed by Germany with 37 percent and Italy with 28 percent.

Nevertheless, that picture has started to change in recent years, and travel to eastern Europe is booming, not least because of the easier allocation of visas and the increased availability of cheap flights. The string of terrorist attacks in France and Germany in recent years is also a factor.

In 2016, the number of Chinese tourists visiting Serbia, for example, rose by 173 percent, and numbers were up by nearly 90 percent in Montenegro.

But while “the Chinese are very alert to questions of security, they tend to forget more easily than other tourists,” Santander said.

Popular for perceivedly having deep pockets, a result of the Chinese tradition of giving presents, Chinese visitors haven’t always enjoyed a reputation for their savoir-vivre.

But that’s an image which China is itself keen to remedy, with “some tourist agencies offering lessons to customers before they go to Europe,” said CTA president Dai Bin. JB