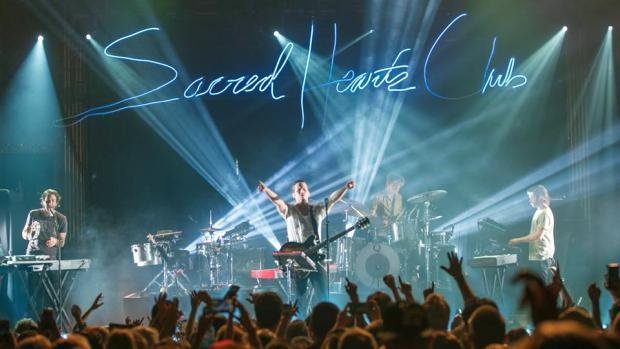 Foster the People (Photo from the group’s Facebook page)

Five years after Foster the People first performed in the Philippines, the American indie-pop band is returning for a concert on Jan. 26 at Kia Theatre, Araneta Center in Quezon City.

I hardly knew the group, which was then composed of lead singer/guitarist Mark Foster, guitarist Cubbie Fink, and drummer Mark Pontius. But the show, held Oct. 6, 2012 at Smart Araneta Coliseum, was a revelation.

“The beat, yes, the beat, was all that mattered – primal, African-derived rhythms whose intensity escalated on ‘Broken Jaw.’ It was a dance tune that the ladies could revel in, but the energy and attitude reverberated with the rawness of punk.

“There were snatches of Steppenwolf’s ‘Born To Be Wild’ riffs when Foster strapped on a guitar to play on ‘Don’t Stop,’ but overall the music was anchored on a delirious dose of steady thumps – otherwise known as disco in the 1970s, but without the air of pretense and predictable choreography from the performers…”

A five-minute promotional documentary video, “Sacred Hearts Club (the beginning),” is on YouTube.

It captures the band rehearsing in the studio several tracks in the new album.

In the video, Innis describes the album as “beat-driven record, psychedelic, ’60s-influenced…”

Foster adds: “Mostly starts with drums, like a beat, and the beat will dictate what comes next… I’m in the room waiting for the spirit to come…”

Is that a hint that the songs came about in an organic way?

But that’s how the band really looked and sounded back in 2012–organic, spontaneous, exciting.