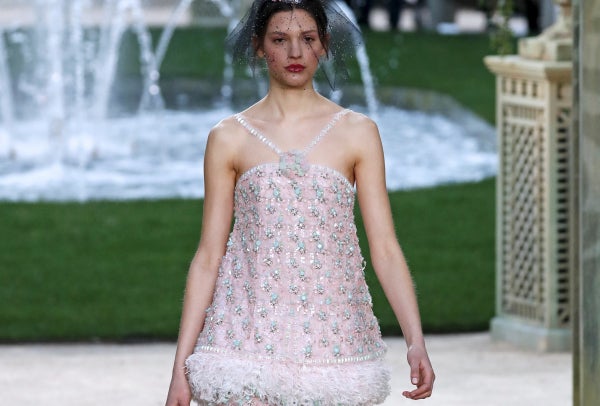 Chanel goes girly with pretty-in-pink walk in the park

Chanel liberated women from their Edwardian corsets a century ago and recut men’s tweeds and trousers to make the modern women’s wardrobe.

Lagerfeld, 84, sporting a wispy white beard which is likely to make at least as many headlines as his clothes, took her classic silhouettes and turned the femininity dial up to sugar plum fairy.

Lagerfeld’s beard is the designer’s first radical change of image in nearly two decades since he lost 41 kilos (90 pounds) in order to squeeze into Hedi Slimane’s skinny black jeans.

Much to the horror of many style watchers, the “Kaiser” wore it rather unkempt, with Harper’s Bazaar saying it made him look “surprisingly (intentionally, we’re sure) scruffy”.

Social media was typically more cruel. “Karl Lagerfeld growing out his beard. He looks like goth Santa Claus,” one person commented on Twitter.

Lagerfeld’s friend, legendary Vogue critic Suzy Menkes, jumped to his defense, however. “So Karl has an exciting new facial accessory. But TRAGICALLY I cannot copy it,” she wrote on Instagram.

There was nothing shabby about his uber-girly collection, however, which pushed pretty till it squeaked.

Yet amid all the frills and feathers, the bride—the figure that traditionally closes Paris haute couture shows—wore trousers.

While rival Dior makes much of their feminist credentials these days under Maria Grazia Chiuri, Lagerfeld may have felt the need to signal that Chanel women are no pushovers either.

As well as closing the show, rising star Bijl, 19, also led out the run of pink and green beaded tweed suits that opened it.

They were matched with similarly beaded mid-calf boots with transparent wedge heels, with some models wearing edged leather gloves in a very Lagerfeld finishing touch.

If the set of a French formal garden complete with fountain was decidedly less overwhelming than Lagerfeld’s usual Grand Palais spectaculars, the flower theme was clear enough.

As well as Sevillian black mesh flower fascinators, bouquets of tiny embroidered flowers lit up a large part of the collection that glinted with crystals and acres of fine embroidery.

One bubble-gum pink flower-fringed bustier dress with matching pink crystal-encrusted boots skirted Barbiedom, but the veteran designer just about got away with it.

And there was a very early 1920s feel about a run of black and silver lace and organza dresses where Lagerfeld played up their slit pockets.

Others, including a couple of coats, were hooped and cut just below the knee.

Kaia Gerber, 16, daughter of 1990s supermodel Cindy Crawford, who is working on a capsule collection of West Coast-inspired designs with the designer, walked with Cara Taylor, who is still only 15.

Lagerfeld defended his choice of so young a model when Taylor first walked for him in Chanel’s ready-to-wear collection in March, telling AFP, “That is ridiculous. Kate Moss and Naomi (Campbell) all started at 12, 13, 14.”

Taylor, a 1.8-metre (5-foot-11) volleyball player from Huntsville, Alabama, has been modelling since last summer, when an agent spotted her in an Instagram photo.

The haute couture shows, which are unique to the French capital, are the creme de la creme of fashion with sometimes thousands of hours going into the handmade dresses that can be afforded only by the richest women on the planet.

Out-of-this-world is a phrase often ascribed to haute couture, and Japanese designer Yuima Nakazato took the description literally by sending out some of his models in space suits. NVG