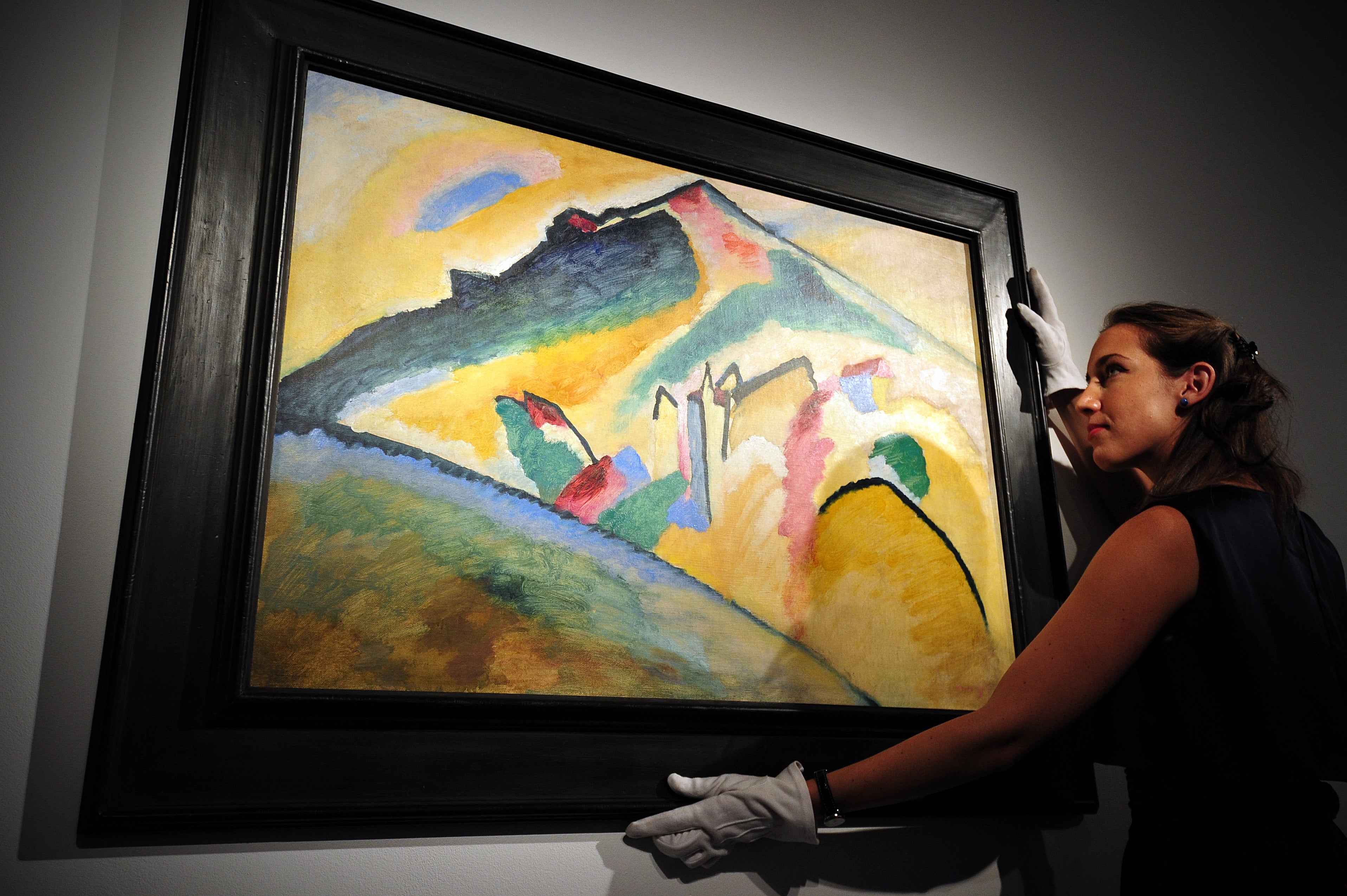 A member of staff poses for pictures next to a painting by Russian artist Wassily Kandinsky entitled 'Herbstlandschaft' at Christie's auction house in central London, on September 12, 2013. Forming part of the 'A Dialogue Through Art: Works from The Jan Krugier Collection' sale in New York on 4-5 November 2013, the painting is expected to fetch between GBP 12.65m -15.8m (15m-18.8m euros/20m-25m USD). AFP PHOTO / CARL COURT / AFP PHOTO / CARL COURT

An exhibition at a state museum in Belgium featuring previously unseen Russian paintings has sent ripples through the art community, with some experts claiming the works are “fake”.

Twenty-six works supposedly by famous avant-garde artists, including Kazimir Malevich and Wassily Kandinsky, have been on display since October at the Museum of Fine Arts in Ghent, on loan from a collector named Igor Toporovski, who insists they are genuine.

When photographs of the pieces appeared online they caused a storm, leaving art experts in Russia and abroad questioning whether such a prominent collection of unknown works by highly sought-after artists could have been amassed in secret.

“These are clearly fakes; they are compiled from fragments (copied from real paintings).”

Some of the pieces indeed bear resemblances to known works. For example, a standing nude allegedly by Vladimir Tatlin depicts a strikingly similar pose to an established painting of a seated nude.

Last week, an open letter by a group of art historians cautioned that the paintings are not in any known catalogues, suggesting the museum remove the works until all questions about their provenance are sufficiently addressed.

On Wednesday, the museum published a statement on its website saying it had “followed the usual procedures for incoming loans and carried a thorough art historical and comparative investigation into the works”.

It had discussed the provenance of the works with their formal owner, Toporovski’s Dielghem Foundation, but said it stopped short of laboratory analysis which is standard practice “only in the case of acquisitions”.

Toporovski has maintained that his collection is genuine, calling the experts’ letter an “unjust attack” guided by art merchants who want to preserve their commercial interests.

Yet the controversy prompted the museum to “establish a committee of experts” with the Flemish culture ministry and Ghent City Hall “to restore peace in order for the museum to concentrate on its main duties,” said deputy mayor Annelies Storms.

The scandal could have been avoided had the museum consulted notable experts in the field, according to Andrei Sarabyanov, an art historian and curator of the Avant-garde Centre at the Jewish Museum in Moscow.

“To make an exhibit with questionable works is just shameful,” he told AFP.

“Maybe they have a hostile attitude towards experts, but it would be logical to ask, to show photographs,” he added even calling the case unprecedented. “There have been exhibits with bad works in private galleries before, but never at a state museum.”

Collectors and historians agree that counterfeit art is a problem that has particularly affected the Russian avant-garde, a revolutionary period spanning between 1890 and 1930 which has been in fashion for several decades.

Real Russian avant-garde art is rare on the market, and most works are well known, said British collector and art historian Matthew Bown, who specializes in 20th-century Russian art. He also said that he was offered a real Malevich only once in his 30-year career, but is regularly offered fakes.

“Even if you are the richest oligarch in Russia, the richest man in the world, if you’re Jeff Bezos of Amazon or Bill Gates or whoever, you would not be able to put together a collection like this,” he told AFP.

When fake art is exhibited in a prominent museum, it not only boosts the value of the piece but also “begins to mess up art history for art historians,” he said. With an aura of authenticity around fake works, “the story of the artist begins to get distorted.”

Sarabyanov went as far as to suggest the incident in Ghent could have been orchestrated to manipulate the art market.

“Over the last decade, prices on avant-garde art fell because of fakes, but rose again in the last two years,” he said. “Perhaps this is a cunning move to drop them again.”     /kga