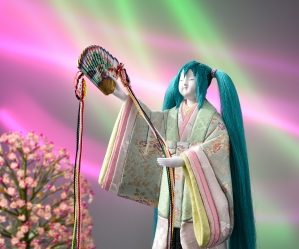 Virtual idol Hatsune Miku has been given a more traditional makeover as a Japanese hina doll.

Hina dolls hold a deep place in Japanese tradition. They are commonly displayed in homes during the Hina Matsuri celebration.

These dolls represent the emperor and empress plus their attendants. They are often made to wear intricately designed traditional Japanese clothing.

On the other hand, the Hatsune Miku hina doll does not have an emperor by its side. Apart from representing the emperor and empress, the pairing has been said to symbolize a happy marriage for a family’s daughter.

According to PR Times via SoraNews24, hina doll company Mataro created the Hatsune Miku hina doll to symbolize a girl’s happiness even when she has no man by her side–a modern concept housed in a traditional medium.

Mataro has been making hina dolls since 1919. The new doll not only breaks Japanese tradition but also the company’s.

Another clue to the doll’s combination of old and new lies in its traditional face and design while retaining Hatsune Miku’s trademark teal twintails.

Collectors of both hina dolls and Hatsune Miku merchandise may keep their wallets in their pockets. Mataro has no plans of selling the unique Miku hina doll. Instead, it will be put on display at their Tokyo shop in Ueno until March 9.

March 9 has long held a special meaning to the virtual idol because it can be read as “miku” in Japanese.  Alfred Bayle /ra