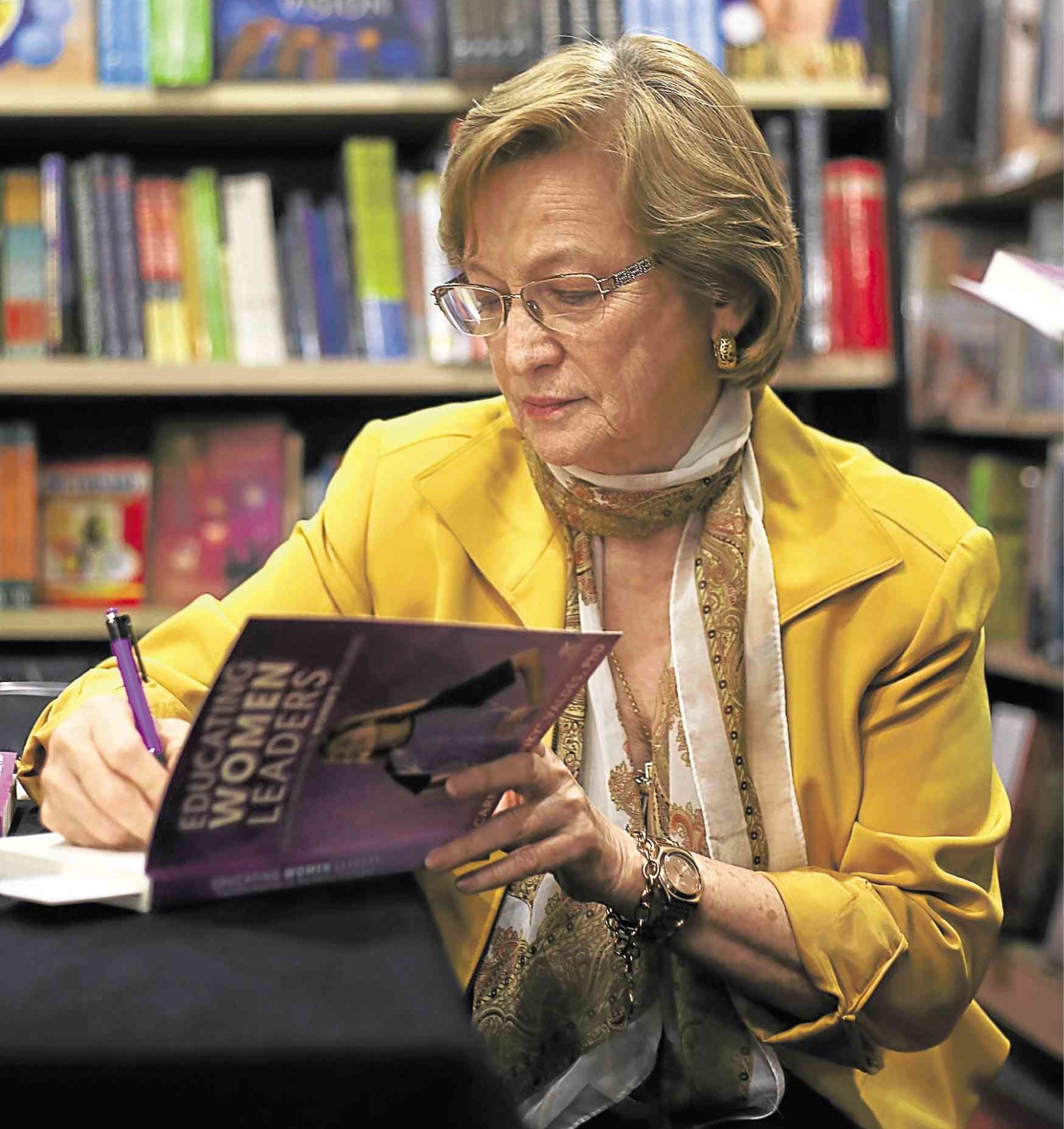 A ripped-from-the-headlines “me too” moment was the last thing one expected in the launch of a book with the academic-sounding title “Educating Women Leaders: Transformation in Women’s Colleges.”

But that was exactly what unfolded.

In the middle of her talk, the book’s author, Assumption College president Carmen “Pinky” Valdes, Ph.D., revealed to a stunned audience that she had been sexually abused over a period of two years, starting when she was six.

It was a teenage cousin who lived next door who had raped her repeatedly, she said, even going so far as to “share” her with another male cousin.

“I can still smell them,” she writes in her account of the episode in her book. “Just the memory of the scent turns my stomach. One never forgets.”

Her ordeal didn’t end there. Shortly afterward, while her family was living in the US, she was molested again, this time by an American La Salle Brother who had become a family friend.

“I never told anyone,” says Valdes.

When her mother grew suspicious of the La Salle Brother’s excessive fondness and asked her point-blank if he had touched her, she said no.

“To me, the feeling was dark and overwhelming, with a strong sense of guilt and shame,” she writes. “I hid in the secret recesses of my soul because no one else could go there.”

“It is strange that not one of those abusers warned me, ‘Don’t tell,’” she continues. “I guess it’s because the abuser knows that a child won’t tell.”

Although she eventually opened up to fellow victims many years later when she was a post-graduate student, it wasn’t until the imminent release of her book by Anvil Publishing this year, more than six decades after the abuse took place, that she told her own family about it.

One of her seven sisters burst into tears, and told her that she, too, had been raped as a child by a carpenter who was working in their house.

Valdes says her experience bears out the grim global statistics compiled by the United Nations that “one in every three women is likely to be beaten, coerced into sex, or abused in her lifetime, usually by somebody she knows,” and that “one in every five women will be a victim of rape or attempted rape.”

With such numbers, she suggests, it is essential that schools—women’s schools, in particular—learn how best to help their students overcome the trauma, so they can grow stronger and excel. Schools should include dealing with abuse and violence in the syllabus of certain subjects, and explore programs that can guide victimized children into what she calls “avenues of healing.”  They should lead in overcoming the social taboos that perpetuate the culture of silence, she suggests, including our squeamishness in talking about sex.

“Speaking out is also the beginning of healing,” she writes in her book. “Victimhood is not a place to dwell in and needs to be overcome. The victim cannot escape or skirt the violent events. She or he must go ‘through’ the experience. Embrace it for what it is and then forgive the persons involved, forgive one’s self, and move forward without looking back.”

It’s a unique perspective for a head of an academic institution, a Catholic women’s college at that.

“We can guide others only as far as we have gone ourselves,” she writes. “Coming to terms with my history and my own movements from shadow to awareness have given me some credibility when I talk to others about their pain, even if they are unaware of mine. They do not need to know what I have been through. Without their knowing it, my experience perhaps makes them feel that we are in the realm of truth.

“Today, when I sit with a child, teenager or adult, I am able to sense their inner pain, although they may not talk too much about it,” she adds.

“I may not be able to help, but certainly I can empathize. In some manner, I can share with them a way through and out of their struggle. My experience of hidden shame and secrecy has made me more perceptive, almost intuitive, about what the other person is going through. It has also helped me to listen and hear what the other person is not saying in order to survive.

“Since the energy of my soul spontaneously goes to the anguish it sees in others, I endeavored to acquire this awareness to help others who are in pain. I finally realized that it is in my soul where I search for the truth, and it is this soul which co-creates my meaning at each present moment. That is how I get through life.”

But the essential first step, as borne out by the spate of revelations of abuse coming from Hollywood, among elite Olympic athletes and within the Catholic Church—is to speak out, as Valdes has, frankly and courageously, in her book.

Now in her early 70s, Valdes would make for an unlikely poster girl for a homegrown “me too” movement, should one emerge in the aftermath of her revelations.

At age 18, she joined the Religious of the Assumption, taking the name Mother Jude Mary, RA.

An Assumptionista through and through, she became one of its teachers and, eventually, high school principal in 1976.

A lover of music and poetry, she was also known as “the singing nun,” even collaborating with Jose Mari Chan on some of her compositions.

After 14 years as a nun, however, she left the convent for secular life.

She explored the corporate world, joining the Bancom group, and later working with various arms of the Ayala Corporation.

A US sojourn found her working for American companies, eventually rising to the position of vice president for human resources for a large San Francisco-based company. It was here that she experienced the “glass ceiling.”

“I knew I would never be president,” she says.

She was a professor at the Loyola School of Theology at the Ateneo de Manila University and dean of the Marie Eugenie School of Innovative Learning before becoming the first lay president of Assumption College in 2016.

Despite her dramatic revelation, dealing with sexual trauma and its consequences is just one aspect of Valdes’ book.

“Educating Women Leaders” is, above all, an impassioned but reasoned defense of women’s colleges as engines for social and cultural change through the empowerment of women.

“Do all-girl schools still have a purpose?” Valdes asks in her introduction. “Are they still relevant in the Philippines? If yes, should single-gender schools for girls exist at every stage of their education from kindergarten to college? These are critical questions for the future of private schools in the Philippines.

“In terms of the purview of this study, the most essential question is—have Catholic all-female schools in the Philippines achieved what they set out to accomplish, i.e., educate young women to go out and make a difference in their community under the overall horizon of Christian values, and in that way, lead?”

Apart from the author’s extensive research in the cognitive aspects of learning, the book is also based on more than 300 interviews with students and graduates of Assumption College, Miriam College and St. Scholastica’s College, the last three all-women colleges in the Philippines.

Its premise is that there are sound scientific, socio-cultural, and practical reasons for keeping all-women’s colleges an option for Filipinos.

“I want to be a voice for students, teachers and parents,” she says of her book.

“Neurologically, biologically and historically, women come from a different place than men,” she says. Girls and boys develop at equal rates at first, but by the fifth grade, girls develop much faster, and it takes several years for the boys to catch up.

Filipino culture doesn’t help in this respect: Mothers tend to pamper their sons while being strict with their daughters. Women, therefore, learn to be responsible at an early age, while men enjoy a prolonged adolescence.

Social and cultural factors also inhibit women when they enter the arena with men in co-educational schools and the workplace. Women have power, says Valdes, but are uneasy about using it.

“For some reason, society still trusts men more with positions that require a large organization, even if women are really good at it, too,” she says.

The key is for men to trust women, to mentor them, and finally help them break through the glass ceiling.

“It takes a brave man to support a woman,” she says.