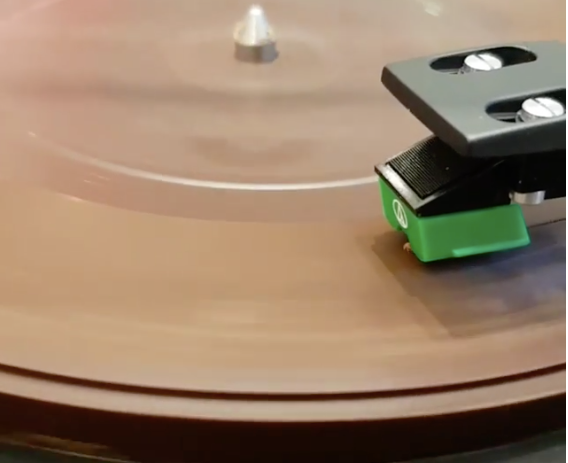 Ever listened to music so good you could actually taste it? Now you can have your vinyl record and eat it too. Tasmania-based French sound artist Julia Drouhin makes the unthinkable possible with her latest project, an exploration of play in the ephemeral nature of sound through the use of the unseemliest, yet sweetest medium: chocolate.

It sounds easy enough. It starts with silicon gel and a reacting agent to create the mould, which is then poured onto the vinyl record. Once set, tempered chocolate is then poured inside the silicon mould, left inside the freezer and in a few hours, placed on the turntable. This chocolate creation gives way to an irreproducible musical experience like no other, one that can only be heard once, in one place, in a lifetime.

“It’s close to the wax that makes the cylinder, which is the ancestor of the record. I wanted to have a musical object that would fade out, disappear while it’s played,” said Drouhin in a report by the South China Morning Post in Feb. 4. “So it’s just for one unique moment, in one place, one time. It’s not reproducible and it’s unpredictable.”

For Drouhin, listening is a sense we often take for granted, even if we use our ears constantly to the point that we filter the sounds going in automatically. This, she believes, makes us deaf about what’s happening around us.

As for her chocolate vinyl records, they get erased while being played on the turntable, only able to be used around 10 times before finally being eaten.

“It reminds me of the ghostly voices and lot music I was inspired by,” said Drouhin. “The more you play the record, the less you can hear the original and you can hear other sounds.”

Drouhin’s exhibition, The Sound of Chocolate Art, will be on view until Feb. 25 in the Gallery by the Harbour in Tsim Sha Tsui, Hong Kong. The video of a chocolate vinyl record in action may be watched below. Cody Cepeda/JB

Hobbyists behind vinyl resurgence in the country