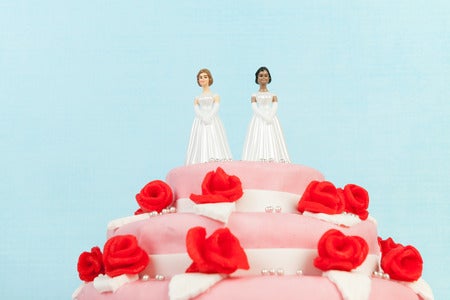 A California court has recognized a pastry chef’s right to refuse to sell a wedding cake to a same-sex couple, as the Supreme Court debates a similar case with weighty implications.

A court in Bakersfield, located in a conservative region of central California, ruled in a judgment on Monday night that the shop owner was able to deny baking a cake specifically for a same-sex couple.

“No baker may place their wares in public display case, open their shop, and then refuse to sell because of race, religion, gender, or gender identification,” the ruling said.

But “the difference here is that the cake in question is not yet baked,” it added.

The court said to make the baker “use her talents to design and create cake she has not yet conceived with the knowledge that her work will be displayed in celebration of marital union her religion forbids” would violate the US first amendment that protects free speech.

Cathy Miller, the baker in question, said she was “so joyful” upon receiving the news, according to US media.

The couple, Eileen and Mireya Rodriguez, however denied that they wanted a special-order cake.

They said they went in August 2017 to taste cakes for their wedding and anticipated ordering a pre-existing model without special decorations.

But after they returned with other people to the bakery, Miller directed them to a competitor, Gimme Some Sugar, saying she does not approve of same-sex marriages for religious reasons.

The Supreme Court is expected to render a decision later this year in a similar case involving a Colorado baker who cited his devout Christian faith in refusing to make a wedding cake for a gay couple.

The case pitting free speech, religion, and artistic freedom against anti-discrimination laws is the most significant for gay rights since the high court approved same-sex marriage two years ago.         /kga