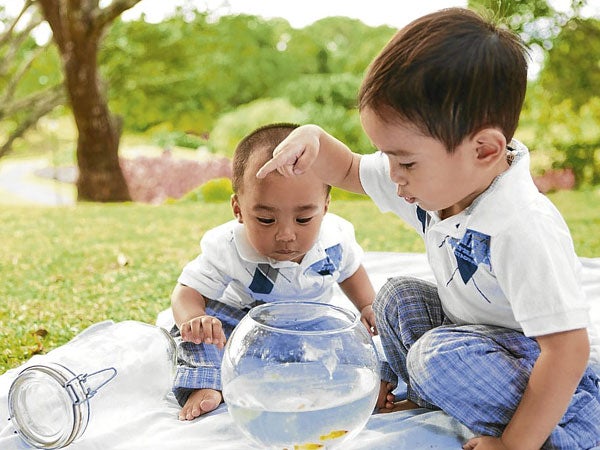 As pictures paint a thousand words, my childhood photos surely said a number of things. Most of the time, they said, I had no idea where the camera was as I looked everywhere but at the camera.

I always looked like I thought playtime should never be interrupted, I hung on to my parents for dear life, and boy, did I love to pose with my legs crossed and head tilted. Though pictures show different bits and pieces of one’s childhood, one thing’s for sure—those captured memories are priceless.

“I like the idea of capturing the moment,” says Kristin Rodriguez, photographer and progenitor of Little People Lifestyle Photography, which started in early 2008 and “aims to capture the whimsy and sweetness of childhood and familial relationships.” After placing an ad in her village country club and newsletter, formalizing her packages and defining her services, she was in business.

Photography definitely played an important role in her childhood, as her dad would take photos of their every move, from bad haircuts to bubble baths. As she got older, she found herself taking photos of her nephews and nieces at birthday parties, and thus her portfolio grew.

As she prefers to photograph kids in their milieu, she notes, “I don’t try to force the moment. I’m just there in their environment, their world.” She recalls a shoot when her subject was throwing a tantrum and stones, at that, since she felt like her mother was forcing her to pose for the camera.

Knowing how kids are usually immersed in their little world and are not accustomed to such things, she chose to let the kid be, and photographed her as she was nonchalantly playing with bubbles. She got the shot.

“I don’t take photos right away. I join them first so I come off as their playmate,” says Rodriguez. A regular shoot consists of not only setting up and preparing the necessary props with her assistant, but also bonding with the kids.

“With each client, I try to find out what they’re like,” she says. “For instance, when I found out that one of my clients owns a stable and his daughter spends a lot of time there, we decided to do the shoot in the stables.”

As I coax her to tell me about her favorite shoot to date, she shows me a photo taken in Australia of two boys, their backs toward the camera, looking like Navajos while running beside a hut on a sunny day, with not a worry in the world. It brought a sense of nostalgia—surely not a typical forced photo in a contrived setup.

“In the future, I want to expand my business. That includes training more people, doing commercial shoots, and having a walk-in gallery instead of a studio, which is more for newborns,” says Rodriguez.

Offering not only specific packages and services, she also does lifestyle pieces such as memo pads, calendars and canvases. She also hopes to do murals and wallpapers. A larger-than-life photo of your adorable child? Wouldn’t that be a sight for sore eyes.