He did the death masks of Ninoy, FPJ | Inquirer Lifestyle ❮ ❯ 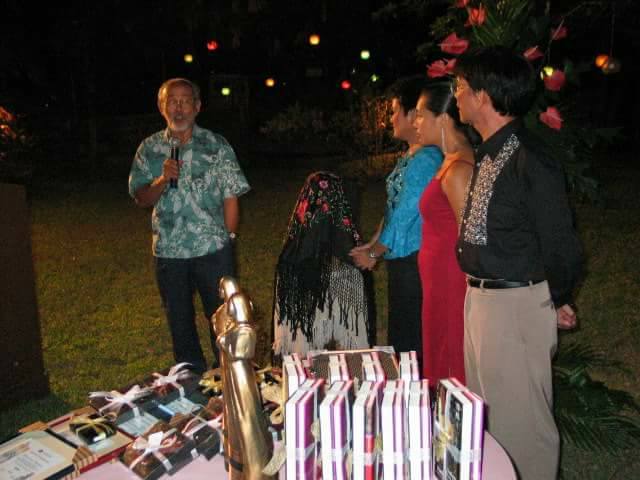 He did the death masks of Ninoy, FPJ

At 88, National Artist for Sculpture and acknowledged Father of Modern Philippine Sculpture Napoleon Abueva has passed away.

At 46 in 1976, he became the youngest National Artist. Abueva, according to his National Artist citation, “has helped shape the local sculpture scene to what it is now,” utilizing almost all kinds of materials from hard wood (molave, acacia, langka wood, ipil, kamagong, palm wood and bamboo) to adobe, metal, stainless steel, cement, marble, bronze, iron, alabaster, coral and brass.

The latter, according to Abueva’s son and assistant sculptor, Mulawin, is his most indelible memory of his father.

“Every weekend, I was with him in Bataan and I had memorized the season of fruits like camachile and melon.”

The Mt. Samat National Heroes Shrine murals were made in a span of five years and Mulawin considers them the greatest legacy of his father.

“At the age of 3, I remember holding a TOYM (Ten Outstanding Young Men) award given to my father when I was born in 1959, the first time the TOYM Award was given,” says the young Abueva who started doing casting work at 7 at their home’s foundry.

That started him young, which he still does today, not only for the works his father left but also for other well-known sculptors, while he also does commercial diving.

Mulawin remembers the installation work he did for his father’s over 50 sculptures at the Malinta Tunnel project in Corregidor, together with National Artist Lamberto Abellana. He was there during its planning and logistics work, not to mention the reproduction of its subterranean cubicles and facilities that had to be transported by barge. He was also at his father’s side doing installation work for the iconic Insular Life façade on Ayala Avenue.

Abueva made sure that he delivered his work as stipulated in the contract he signed, even without fully receiving the full amount, Mulawin says. He would spend 50 percent of his money in junkshops for the metal he would use; 40 percent for his sculptures including the construction of his own studios like the one in his Hundarawan (ancestral home) in Duero, Bohol, and in his house at University of the Philippines Professors’ Village in Quezon City, and 10 percent to Mulawin’s mother, Dr. Cherry Abueva, a psychiatrist.

“We were always told, ‘I’m not a rich person but I will provide you education and shelter,’” Mulawin quotes his father as saying.

Mulawin says that when his activist sister Amihan, who was then studying at Philippine Science High School, learned that her father was to receive the National Artist award, she told him not to accept it from the Marcoses because they were corrupt.

The father answered, if obliquely: “I worked hard all my life for this. I was orphaned when the Japanese killed my parents when I was 9. When I was 7, my only toy was clay which I fashioned into small figurines. The other boys would target them and I tried to make smaller figurines which I would put on hollow blocks to dry. The naughty boys were not able to target them anymore.”

When this author’s daughter Maningning passed in 2000, Abueva, fondly called Billy, approached my husband Mario and me to request to allow him to do our daughter’s death mask. She was his student at the UP College of Fine Arts and there was a subject where she was his only student.

“She was a very good student and in fact, I learned a lot from her, more than she did from me,” he humbly told us. That death mask was only his second death mask after Ninoy Aquino’s.

Later, he would do another, that of Fernando Poe Jr.

In 2003, during the 1st Maningning Miclat Poetry Awards held at the UP Executive House, Abueva unveiled the bust he made of Maningning. In his speech he said, “There are only two kinds of people in the world: the givers and the takers. And Maningning definitely is a giver.”

Many things have been written about Napoleon Abueva. Artist par excellence. Father of Modern Philippine Sculpture. National Artist. But to this author, he remains the most humble artist she has ever known whose generosity knows no bounds.

Billy Abueva is the greatest giver of all! –CONTRIBUTED

The author is the president of the Maningning Miclat Art Foundation. Email her at [email protected]