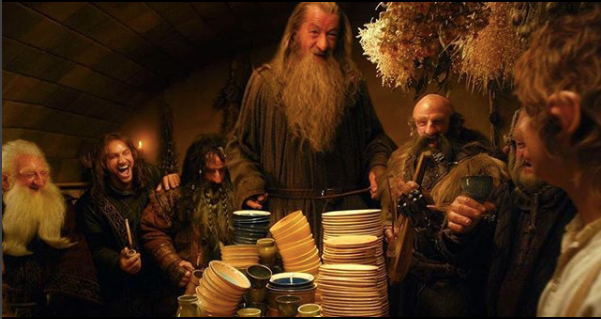 LOOK: Man recreates all ‘Lord of the Rings’ meals in for movie marathon

Think you’re a real Tolkien fan? Think again. One diehard “Lord of the Rings” fan just put the entire Tolkien fandom to shame after embarking on an epic hero’s journey, specifically a gastronomic voyage into the world of Middle-Earth cookery.

If you can’t handle the Hobbits’ six meals a day and more, fear not. You can live vicariously through Regular Frog’s (@FrogCroakley) amusing Twitter thread, who recreated all the meals in “The Lord of the Rings” trilogy to pay homage to his deceased father who was a huge fan.

Regular Frog tweeted in Feb. 17 that he and a friend, @Glitter_brawl are going to start a back-to-back marathon of the three LOTR films, and that he’s prepared a 14-course meal to go with it. “Dad died a year ago and this seemed by far the most reasonable way to commemorate that.”

Regular Frog shared the day’s menu, which involved a whopping 14 meals. His tweet soon attracted thousands of netizens, most were fans and some just wanted to see if he could actually go through the entire course.

Regular Frog kicked it off with a breakfast plate of banana bread and tea, following the eating scenes shown in the movie. Frog then continued to update his Twitter thread with other meals, from carrot sticks and greasy sausages, to pesto hummus and Elven lembas bread.

After 15 hours and 21 courses later, Regular Frog finished his “Lord of the Rings” movie marathon, finally putting an end to his indulgent undertaking with a 30-year-old sherry from his father’s wine rack, the man who started it all.

Could Regular Frog have been a Hobbit in his past life? It must be the only explanation behind his gourmand ways. Cheers! JB