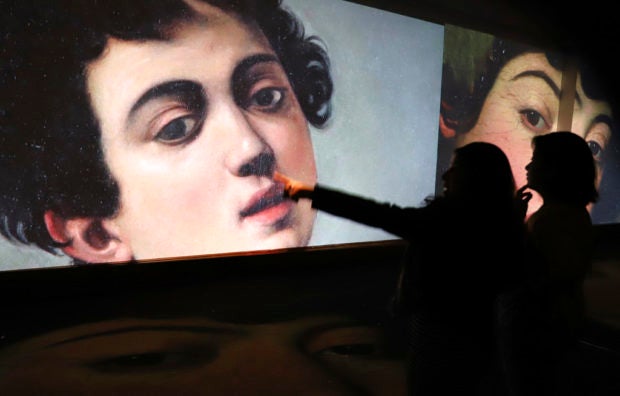 Visitors look at a projection of a painting by Italian master Michelangelo Merisi da Caravaggio (1571-1610) during the opening of a Caravaggio exhibit at the National Art Museum in Mexico City Wednesday Feb. 21, 2018. (AP Photo/Bernandino Hernandez)

MEXICO CITY — The celebrated painting “The Fortune Teller” by Caravaggio is going on display in Mexico City in what curators describe as a multi-sensory exhibit that brings the public into the Italian baroque master’s world.

The exposition “Caravaggio. A Work, a Legacy” centers on the emblematic painting (1593-1595), which shows a fortune teller reading the hand of a wealthy young man who fails to notice that she’s stealing his ring.

The gazes of complicity between the two and the sensuality of the woman contrast with the dexterous movement of her fingers and the trap into which the young man is falling. The ring, tiny, is depicted with a brush stroke of Naples yellow.

It was one of the few works where Caravaggio was free to choose his theme, and in fact it was done on top of another painting, a vertically oriented Madonna canvas that he rotated horizontally.

“This work is a Caravaggist manifesto par excellence,” said Sara Baz, director of the Museo Nacional de Arte, where the work will be shown from Thursday through May 20.

“It is a very big novelty in theme and in the naturalist treatment of the characters,” she added. “The black background, for example, the idea that you do not know if you are in an interior or exterior scene, whether it is luxurious or you are in the street — that was very disruptive for the fine arts of the period.”

Although Caravaggio, born in 1571 in Milan, painted only about 100 works and died at 38, when he traveled from Naples, his influence extended to such prominent painters as Rubens, Bernini and Rembrandt. The exposition includes works from other painters who adopted the Caravaggio style, such as Rutilio Manetti and Luca Giordano.

The second part of the exhibit. is titled “Caravaggio Experience” and consists of a multi-sensory installation including a 45-minute video divided into four chapters on important aspects of his painting: “Light,” ”Theatricality,” ”Naturalism” and “Violence.” There are also highlights from his life. The installation runs through July 1.

Created by the Italian studio The Fake Factory, it combines music and a fragrance inspired by the Mediterranean with images from 58 Caravaggio paintings which are displayed in great detail by multiple projectors that reflect images on the walls and floor of the gallery. The room remains dark at all times.

“It is like returning to your mother before being born,” Stefano Fake, the studio’s creative director, said of the intimate atmosphere.

The installation premiered two years ago in Rome and has also showed in Turin, attracting thousands of visitors. The stop in Mexico City is the first outside Italy. Fake recommended that visitors let themselves be swept away and open up their senses, and even take off their shoes and sit on the carpet when the urge strikes.

“It is not the technology that is important but how you use the technology, and what we have done here is a way to enter Caravaggio’s painting in a way that is very sweet but very intense,” said Fake, whose team spent six months setting up the installation.

“The Fortune Teller” appears in the sections on light and theatricality, but Fake said the goal is for visitors to get a general idea about the artist’s oeuvre.

“The secret,” he said, “is that you can take away from here your own secret.” MKH