A game of love and hugot | Inquirer Lifestyle 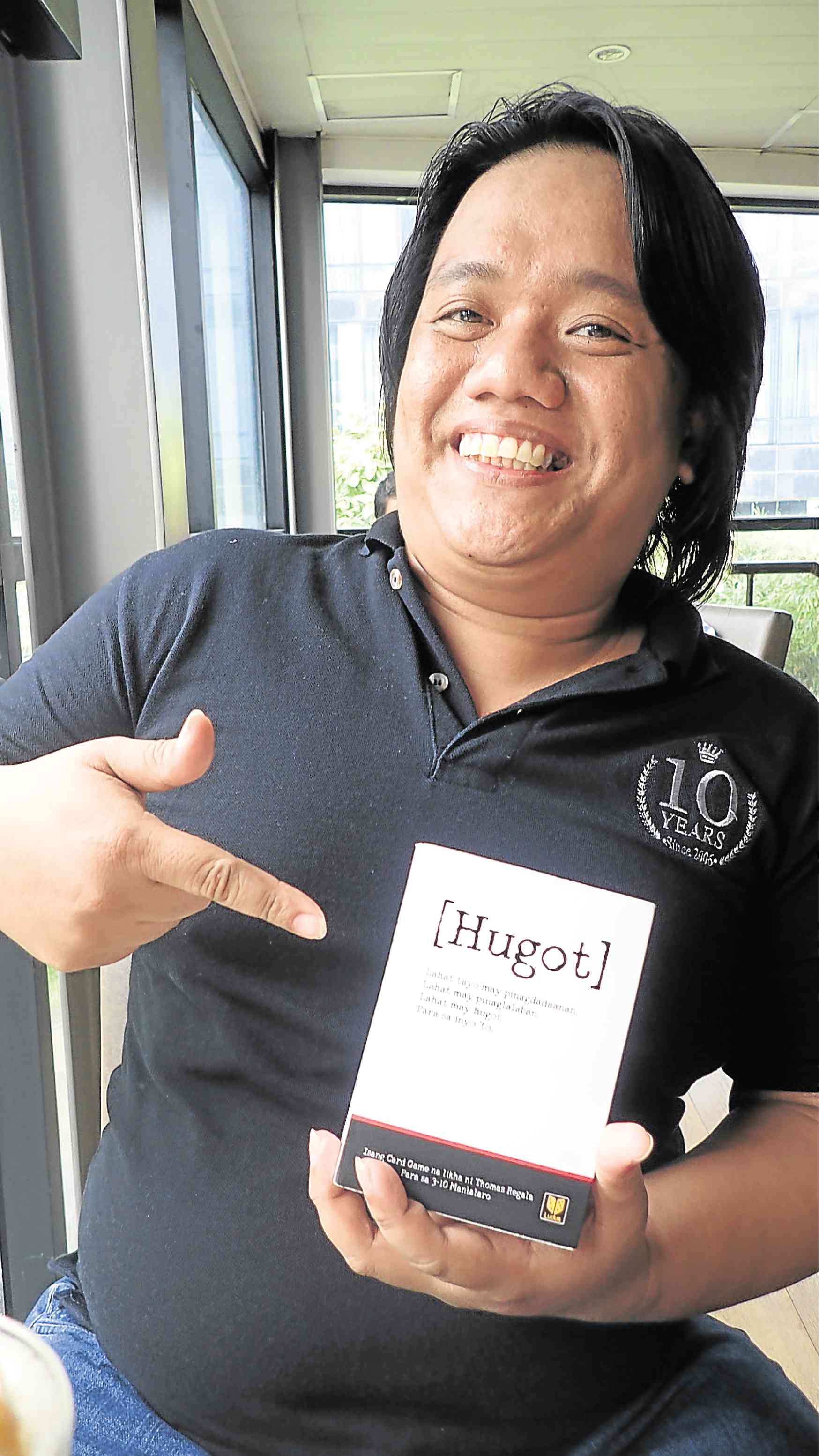 A game of love and hugot

If love is the universal language, then hugot must be the Pinoys’ vernacular.

These days, other than
three stars and a sun, there’s probably nothing more identifiably Pinoy than hugot and hugot lines.

It’s easy to see how we are able to speak it fluently: The word, after all, means to draw deeply from emotions or experience, both of which Pinoys have undoubtedly a richness.

Filipinos have gone through
—continue to go through—a lot as a people and as individuals, and yet our resilience has always been credited to our ability to smile through strife.

And while it was initially an expression of sentimentality, sorrow or spite, hugot eventually took on playful undertones as usage became more and more widespread, succinctly characterizing the enduring Filipino tendency to find levity amid misery.

Since its rise in popularity as a hashtag a few of years ago, hugot seems to have permeated all aspects of Pinoy existence: Love life? There’s a hugot line for that. Political turmoil? Hugot lines apply. Hunger? Man, hugot forever!

“Call center zombie”
-slash-game designer Thomas Regala just came from a breakup in 2015, and creating games was his way of coping.

Around the same time, a friend was also going through a breakup, and Regala was getting tired of her flooding his newsfeed with depressing posts from Betsin-artparasites and similar pages.

He told her that if she didn’t stop with the hugot posts, he’d make a game out of it. Soon after, the Hugot Card Game was created.

Initially a self-published game with only 30 copies made, the Hugot Card Game has been picked up by Ludus Distributors and now has an expansion called Hugot Pa More.

This home-grown game is played somewhat similarly to Cards Against Humanity: As one player reveals a question card, the rest of the group pick their best/worst answer cards from their hand and place it on the table and the player with the question card picks the winner.

The main difference is that Hugot does away with anonymity as it compels the participants to own their choices by defending them with punchy lines.

The players have no choice but to put more of themselves into the game as they dig deep for their inner hugutero and hugutera.

And to get the participants in the mood right off the bat, the player who most recently had a breakup becomes the first Hugotlord. Talk about opening old wounds.

Sure, it puts players on the spot. But it encourages them to open up among friends, lovers or even strangers, making it quite an insightful activity
—not just fun and humorous.

In fact, another of Regala’s friends brought the Hugot Card Game to a retreat where a couple of participants were each other’s exes. It’s not hard to imagine what kind of drama and/or hilarity ensued as they spewed one hugot line after another. But wielded properly, the game could also prove to be an effective instrument of catharsis.

In fact, it’s not unusual for answers to be met with exclamations of “Whoaaa!” or “Who hurt you?!” or just dumbfounded silence. But there’s definitely bound to be lots of laughter.

Regala likes to say that while other games tickle the brain, his card game triggers the emotions. But in reality, this game manages to tick both boxes.

Harnessing the power of hugot isn’t just a matter of feeling, but also of strategizing. Not only do you need to consider which answer card rings truest for any given question card, but how do you work it into a hugot line and deliver it for maximum impact?

More than simply being sufficiently emo, hugot lines should serve pointed truths artfully packaged as subtle to severe witticisms. In other words, tagos.

But if you’re still finding it hard to speak in hugot, remember: One, hugot as you are able. People have different depths and different limits to how far they’re willing to pull from. No pressure. It’s just a game.

Two, everything is “hugotable.” You’ll find throughout the play that you’ll be making ridiculous connections about the strangest things. Sometimes, the joke (or maybe patama) lands, sometimes it doesn’t, and that’s OK. Hugot lang nang hugot!

And three, hugot is in the blood of our people. After all, wasn’t it our national hero who penned the ultimate hugot line, “Ang hindi lumingon sa pinanggalingan ay hindi makakarating sa paroroonan,” and more?

Visit http://bit.ly/wheretofindhugot for the list of stores carrying the Hugot Card Game.