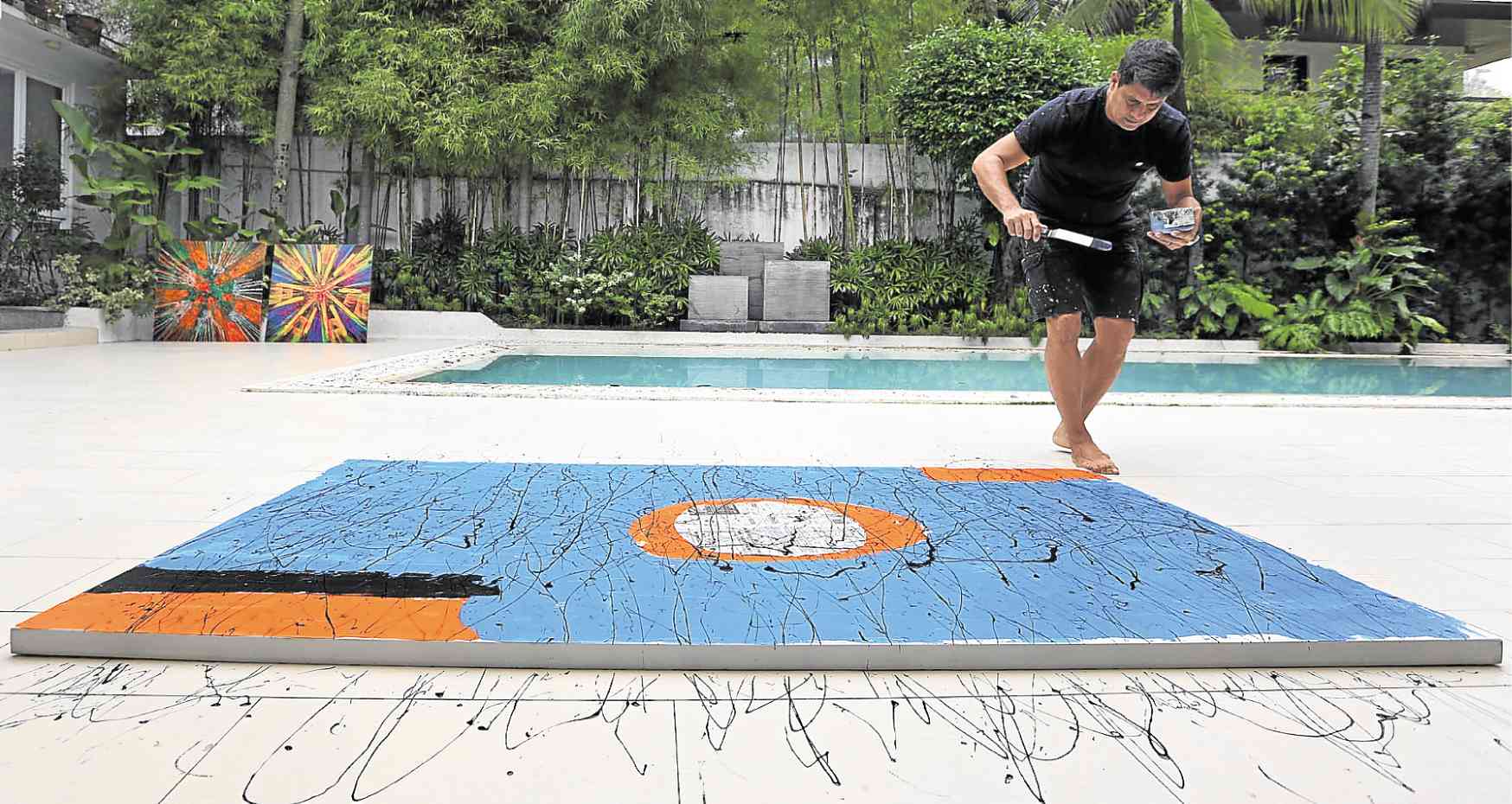 Richard Gomez prefers using a palette knife when he works.

Even Romulo Galicano has bought a Richard Gomez painting

On the quiet Sunday morning of this interview, actor, athlete and Ormoc City mayor Richard Gomez stands hunched over a large rectangular canvas laid on the tiled floor of the patio in his home. Using a palette knife, he splatters black acrylic paint on the canvas that already had bright shades of orange and blue.

Never mind that he had just flown in from Ormoc City, Leyte, where he lives on weekdays, or that his allergy was giving him a bad case of the sniffles and a sneezing fit, or that he was leaving blotches of fresh black paint on the white floor tiles. Gomez, barefoot and clad in a paint-stained black T-shirt and cargo shorts, is in the zone and enjoying himself.

A self-taught artist, he recently mounted his first one-man show at the Pinto Art Museum in Antipolo City.

“Surface,” his 31-piece collection of large-scale acrylic works from the last two-and-a-half years, captures what Gomez described as “experiential art,” abstracts that represent his experiences, and his thoughts and feelings toward them.

He certainly had many to draw from: natural disasters like 2013’s Supertyphoon “Yolanda,” July 2017’s magnitude 6.5 earthquake (whose epicenter was in Barangay Tongonan, Ormoc), and the deadly floods caused by last December’s typhoons Urduja and Vinta were represented in bold strokes, textured applications, and his trademark paint splatters—from gooey to hairline fine.

While equally at ease with shocking shades and somber black-and-white, Gomez doesn’t necessarily associate happy colors with good memories, and muted tones with sad ones. One of his newest works, the series “Fireworks” (inspired by the New Year revelry in Ormoc), features bursts in his favorite black. “It’s a very powerful color,” he says.

Later, deliverymen arrive with framed canvases of his latest pieces. One of them, an abstract of thick horizontal magenta and red lines over a background of black, elicits oohs and aahs, until the artist explains that the three red lines in the bottom symbolize the three men he saw being swept away by floodwaters during rescue operations.

Gomez recalls feeling dumbstruck and helpless at the sight. “Luckily, they survived,” he says. “They were found in a faraway barangay, clinging to trees.”

Proceeds from the sale of “Surface” helped finance a playground for Ormoc’s children. Asked if he raised enough to fund his project, the mayor pauses. “’Pag kulang, abonohan na lang!“ he concedes with a laugh.

Though Gomez has been drawing for years, his appreciation for fine art began only in the mid-’80s, about the same time he got into show business.
Influenced by film directors-turned-avid art collectors Danny Zialcita and Maning Borlaza, he remembers buying his most significant artwork from Borlaza’s gallery, a large painting by HR Ocampo from his “Green Revolution” series.

Today, the piece has a prominent place in the home Gomez shares with his wife, Leyte 4th District Rep. Lucy Torres Gomez, and their teenage daughter, Juliana. “I like his color palettes and strokes,” he says of Ocampo, a National Artist for Visual Arts. “He’s my favorite.”

It was Montemayor who helped Gomez mount his first solo show at Pinto, after visiting him at home and seeing his huge volume of works. Before Gomez knew it, Montemayor told Pinto Art Museum owner Dr. Joven Cuanang, and an exhibit from Dec. 17 to Jan. 16 was booked.

“Doc Cuanang wants me to do it this November!” exclaims Gomez of his next show.

For now, painting is his only creative outlet, having shelved acting temporarily to focus on a demanding career as public servant. Since his appointment as mayor in 2016, Gomez has instilled discipline in the first-class city in Leyte, implementing speed limits and the helmet law and keeping market vendors off the streets.

Once known as the drug capital of Eastern Visayas, Ormoc was declared the first drug-free city in the region by the Philippine Drug Enforcement Agency last November.

Free time will find him immersed in his art. He prefers water-based acrylic because it dries fast and is more forgiving. “If you make a mistake, it’s easy to correct,” he says. “Just wipe it off with a cloth.”

When he’s not using a palette knife or brush, he’s employing unusual painting techniques, like spinning his wet canvas on a table or from the branch of a tree where it hangs by its four corners tied to a rope. The centrifugal force, Gomez discovered, distributes the paint evenly.

Large canvases allow him to move around and express himself freely. And he usually paints in a series of two, three, or four, so he can tell if his work is consistent or just a fluke: “Ano ba ito, tsamba?”

His collectors will tell you otherwise. In his exhibit, buyers included Dr. Cuanang (who purchased the black-and-white “Epicenter”) and Galicano (who bought the colorful and busy “Green Dragon”).

Naturally, first dibs went to his family, and their choices are not for sale. Juliana’s personal pick is “Race Day,” an animate blue-and-violet piece inspired by the hobie cat scene in “The Love Affair,” a film that starred his dad, Dawn Zulueta and Bea Alonzo.
Lucy’s is the richly textured and splattered “Winter is Coming.” And for Gomez himself is “Soleil Couchant,” a visual tribute to his adoptive city.

“Ormoc is a coastal town,” he explains as he points to the work with a sliver of red sandwiched between generous layers of white and blue from his show’s catalogue. “This represents the sunset and the deep blue sea.”–CONTRIBUTED