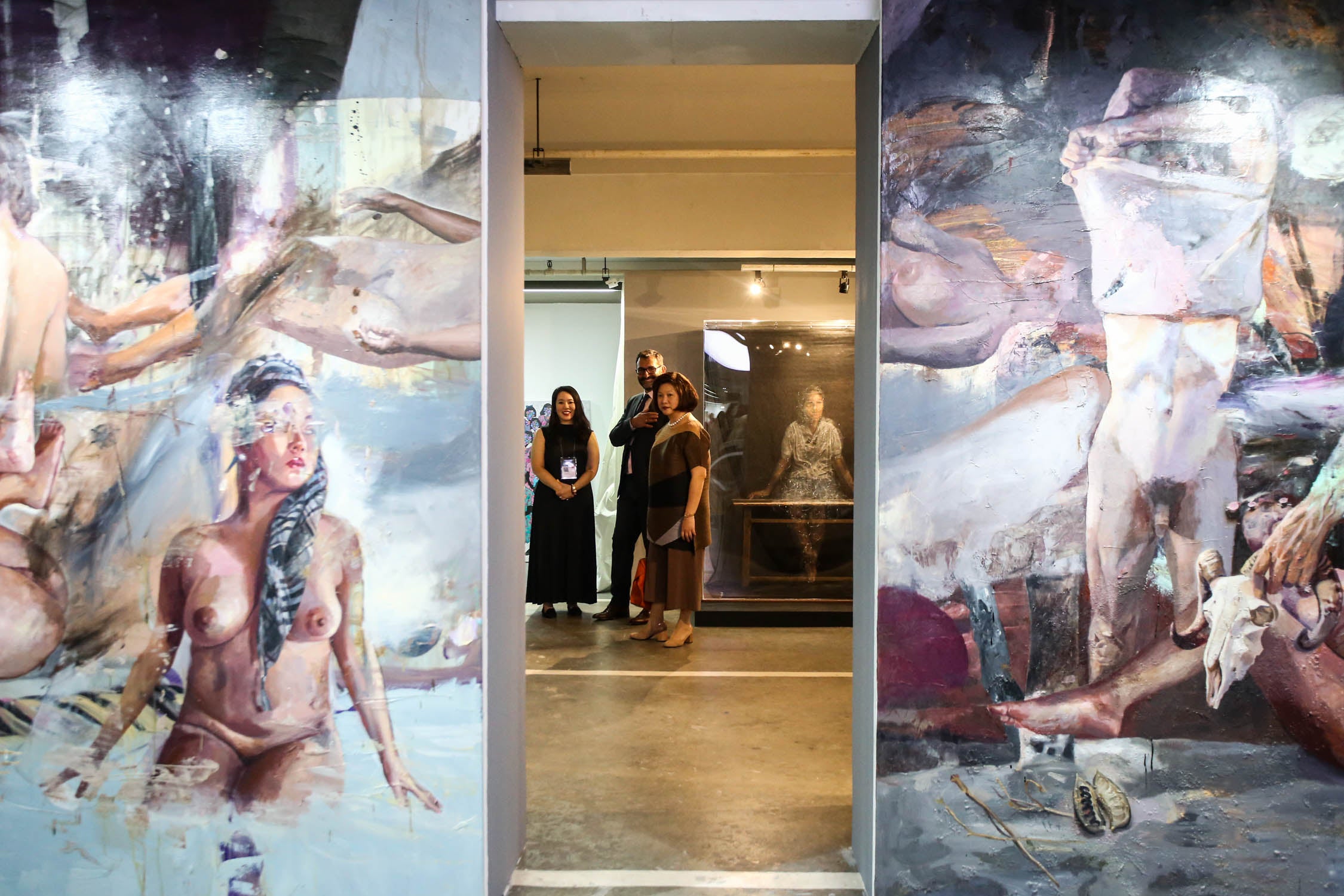 FEBRUARY 27, 2018 Art Fair Philippines 2018, the country's premier platform for exhibiting and selling modern and contemporary Philippine visual art had their press preview on Tuesday, Feb 27 at The Link Carpark, Makati. The exhibit will officially run from March 1-4, 2018 and it's on their sixth edition. Photo by JAM STA ROSA

So goes the title of Nilo Ilarde’s installation commissioned for this year’s Art Fair Philippines, which consists of—count them—24,124 die-cast miniature cars (“Matchboxes,” we used to call them) covering the entire floor area of his space.

The caption for his piece goes, “Ilarde directly intervenes on The Link as a carpark-turned-playground, drawing attention to the fair as a site of excess and a space for free play.”

When artists self-reflexively start making artwork about the Art Fair, it probably means some kind of threshold has been reached.

The caption goes on to ask: “Do these die-cast cars similarly tell of our inexhaustible compulsion to collect? …the art world is now fueled by things created, copied, commodified, and collected. Could we really not enter the landscape? Ilarde’s playground insinuates we are already part of it.”

With the sheer scale of this year’s fair, how could we not be?

For one thing, the Art Fair now occupies all seven floors of the Link Carpark in the Ayala Center, from last year’s five, suggesting that the organizers anticipate once more topping last year’s attendance record of over 40,000 visitors. Every inch of available space—13,000 sqm, to be exact—is given over to gallery space, sponsor’s booths, food and beverage concessions and public spaces. To forestall last year’s long queues, the organizers are now trying timed entries for visitors: 10 a.m.-1:30 p.m., 2-5 p.m., and 5:30-9 p.m..

While entries are staggered, however, visitors can stay as long as they like and leave when they want. Tickets are also available online (see www.artfairphilippines.com). Two days were also alloted for collectors prior to the public opening on March 1.

“The geography is different now,” says Lyra Garcellano, whose installation “Tropical Loop” was also commissioned for this year’s Art Fair. “Before, it was just the Manila gallery circuit. Now you’re going beyond to Southeast Asia, East Asia, even Europe and America. Theoretically, we’re part of the global map. Theoretically.”

Garcellano’s recent work has centered on institutional critiques, which might explain why she’s especially sensitive to the ironic nuances of being in the center of the Art Fair.

“Dissent, especially, has become so corny,” she says. “People say, ‘Your positivity is lacking.’ The discourse becomes ‘let’s just have fun.’ When you try to say something, it’s labeled as a ‘rant,’ when a rant is supposed to be a complaint that’s unreasonable. But not all complaints are unreasonable.”
Rant or meditation

While far from being a “rant,” “Tropical Loop” seems to be a meditation on the Sisyphean nature of art as an expression of our identity. Or something like that.

“My pieces call out certain things that may not be fun, but open people to certain ideas—that art is also about research,” says Garcellano. “It’s not just a spectacle that people like. I like it sometimes, but I also like things that make me think.”

In any case, with its proven success as a platform for exhibiting and selling art, Art Fair Philippines can afford to push the envelope a bit when it comes to content.

This year, for instance, an entire section is devoted to photography, a medium which has enjoyed lukewarm sales at best. (Collectors still prefer unique objects.)

Curated by Neal Oshima and Angel Shaw, “Provocations” presents a spectrum of Filipino photographers, documentarists as well as art photographers.

One of the more powerful exhibits this year is also largely photographic. Carlo Gabuco’s “Everyday Impunity” consists of a montage of his photographs of victims of the drug war, and an installation that includes the actual chair in which one of the victims was sitting when he was shot. Visitors are invited to sit in the chair and listen as the testimony of the victim’s daughter plays. A laser sight draws the eye toward the bullet hole in the chair.

Not exactly “fun,” but it does make you think.