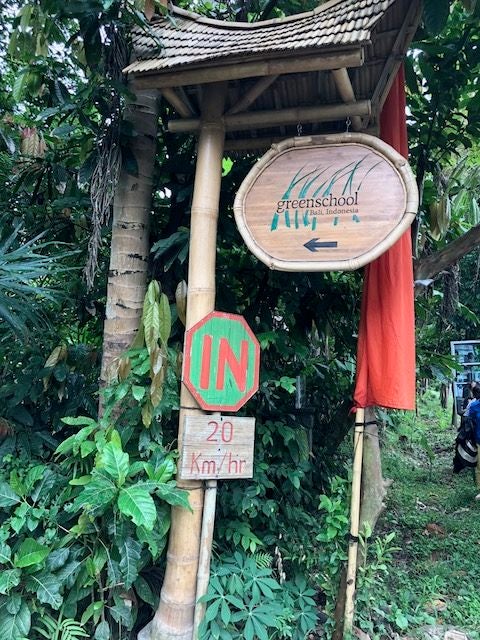 “This should be the highlight of this trip,” Maan Hontiveros, ex-CEO and chair of AirAsia Philippines, recalled telling her former staff when we arrived at the Green School.

The school — known for its open-air, wall-less classrooms made of bamboo — is neatly tucked in a forest in Ubud, Bali, Indonesia.

From Kuta, Bali, Hontiveros and her friends were joined by a group of journalists and bloggers for a five-day trip in Bali by AirAsia Philippines. The group travelled by land for more than an hour to the town of Ubud last March 1.

After checking in at the newly-opened Element by Westin hotel and a quick lunch in a nearby cafe, the group went directly to the Green School for a tour.

It was already around 3:30 p.m. when we arrived at the area. A narrow road leading to the Green School had prompted the bus driver to disembark its passengers a few meters away from the campus itself.

A young girl, struggling to ride her bike while catching up on another kid, caught our attention as we made our way to the gate. Both girls looking much like foreign students of the school.

“My brother came here to study a short course,” Hontiveros, a bamboo advocate, said as we entered the campus. The group was welcomed by the staff of the school and its communications head, Lee Ann McKee.

McKee also happens to be a parent of one of the students at Green School. Her daughter, she said, has started her education at Green School since she was three years old.

As she started the tour, McKee talked about how the community had grown from less than 100 students when it opened in 2008 to more than 400 a decade after. The students are aged three to 18-years-old.

McKee said the top three nationalities enrolled at the school are Americans, Australians and Indonesians.

Just like other campuses, Green School has a music building, an assembly hall, an open field, a canteen, a science room, and a kitchen lab, among others — all made of bamboo, including a bridge inside the vast area of the school.

The cost of education in the bamboo school, also based on its website, starts from more than 101 million Rupiah/year (about P400,000) and could reach as high as 225 million Rupiah (about P900 million) a year.

But at Green School, students are taught how to make money out of trash.

Inside the campus one will find a “Kembali” center where trash is recycled and sold. It also has the so-called “trash-for-class” program, which aims to encourage local children to study by paying the school not cash but trash.

“They don’t pay us cash but they pay trash. It’s called trash for class…They have to bring five kilos of trash in one semester,” said a staff member working at the center.

One signage inside the school also caught our attention. It reads: “Get a free juice by collecting 10 or more bottles and bringing them to us.”

McKee explained that when its founders, John and Cynthia Hardy, envisioned the school, what they had in mind was that “there’s no one in the planet that’s more positive than the children to impact change…”

That’s why at Green School, she said, students are “empowered to make big decisions and create really cool solutions.”

McKee recalled how Grade 5 kids started a Chicken project by borrowing money from the students’ bank to buy chickens and build a hatch for them. They promised to pay back by selling chicken eggs.

She also took pride of their students like sisters Isabel and Melati Wijsen, who generated noise around the globe after they started a plastic bag ban campaign in Bali known as “Bye Bye Plastic Bags.”

“They are inspiring students. I am humbled whenever I see them…” McKee said.

Back at Element hotel, Hontiveros talked about her love for bamboos.

“So many products can make out of it,” she said. “The problem is that bamboo had gotten a bad reputation because they say you have to change it every five years but that’s because people don’t know how to clean the bamboo.” /jpv