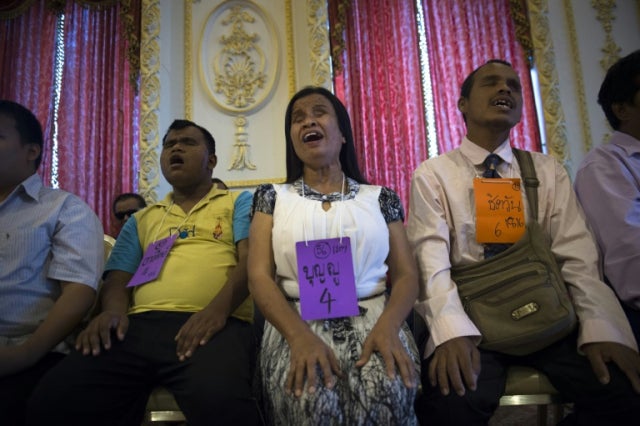 Blind singers from all around Thailand practice scales during classes hosted by the Social Development and Welfare Department, at a hotel in Bangkok. Image: Lillian Suwanrumpha

Strumming his guitar with ease and backed by a drummer, Singhkum Boonriang belts out covers of Thai ballads as strangers pass by on a busy Bangkok afternoon.

But Singhkum is no ordinary busker — he’s one of hundreds of blind singers who perform across the Thai capital at traffic junctions, skytrain stops and other busy locations.

“It’s born out of my love to play music and sing,” Singhkum explains, sitting in front of a small donation box. Aided by a small speaker, he is hopeful of attracting attention, and some loose change.

He started performing in his teens but took up the street gig four years ago when he moved to the Thai capital from the north.

“When I first arrived in Bangkok, I heard many street musicians playing in public spaces, and I love to sing, so I gave it a try,” he adds.

Like Singhkum, many of Bangkok’s blind singers hail from poor and rural provinces and come to the capital in search of work.

But their options are limited.

“There are two or three jobs that we can do, like selling lottery tickets, singing or giving massages,” muses 50-year-old Yupin Boonchuen, who makes around 1,000 baht (US$31) a day performing outside a skytrain station.

Attitudes towards begging and street performing are ambiguous in superstitious Thailand; some view disabilities as the result of bad karma from previous lives.

Such street jobs also carry a social stigma, with buskers seen as hustlers on the run from city officials.

“Sometimes (when I get chased away) I feel, why don’t they give me a chance? I was sad that they didn’t give me an opportunity to show my talent,” Yupin says.

But others in this Buddhist-majority nation see giving to the needy as a way to accrue merit in their next life.

The singers, armed with traditional mandolins and bamboo flutes, can transport listeners to the past.

“They’re actually part of the traditional folk culture of this country,” explains Philip Cornwell-Smith, author of a book on Thai culture.

“The sound is quite plaintive — the music itself is quite nostalgic, almost, and so I think it has quite a strong pull on the Thai heart,” he adds.

Attitudes may also be changing thanks to reforms from an unlikely corner.

The junta that grabbed power in 2014 has pushed through new rules separating street showmen from beggars by granting “talent” cards.

All Thais who wish to perform for money in public spaces can now register with the authorities and play legally.

So far over 2,000 people have signed up as street performers with the blind singers making up the majority.

The government has also started offering music, performance and fashion classes to help blind singers sharpen their skills and presentation.

“The project stemed from the idea of not leaving anyone behind,” said Napa Setthakorn, director of the Social Development and Welfare Department, which runs the program.

Yet as the legal channels open up, the number of street troubadours is increasing, including young musicians pumping out pop hits.

The added competition often means a drop in earnings.

Singhkum, the guitarist at Lumpini park, says that on some days he can’t make enough money to cover the two-way pick-up service he needs and the helper who chaperones his travel.

And if this gig doesn’t work out, he’s not sure where else to turn.

He asks: “How many opportunities does our society provide for the disabled?”

“I think little. The disabled people can do so many things but the acceptance from society is still low,” the 28-year-old adds.

His wish is to be seen as first and foremost as a musician. He insists: “I just want them to think of me as doing a job, not for the sympathy.” CC