On the set of ‘A Wrinkle in Time’ | Inquirer Lifestyle ❮ ❯ 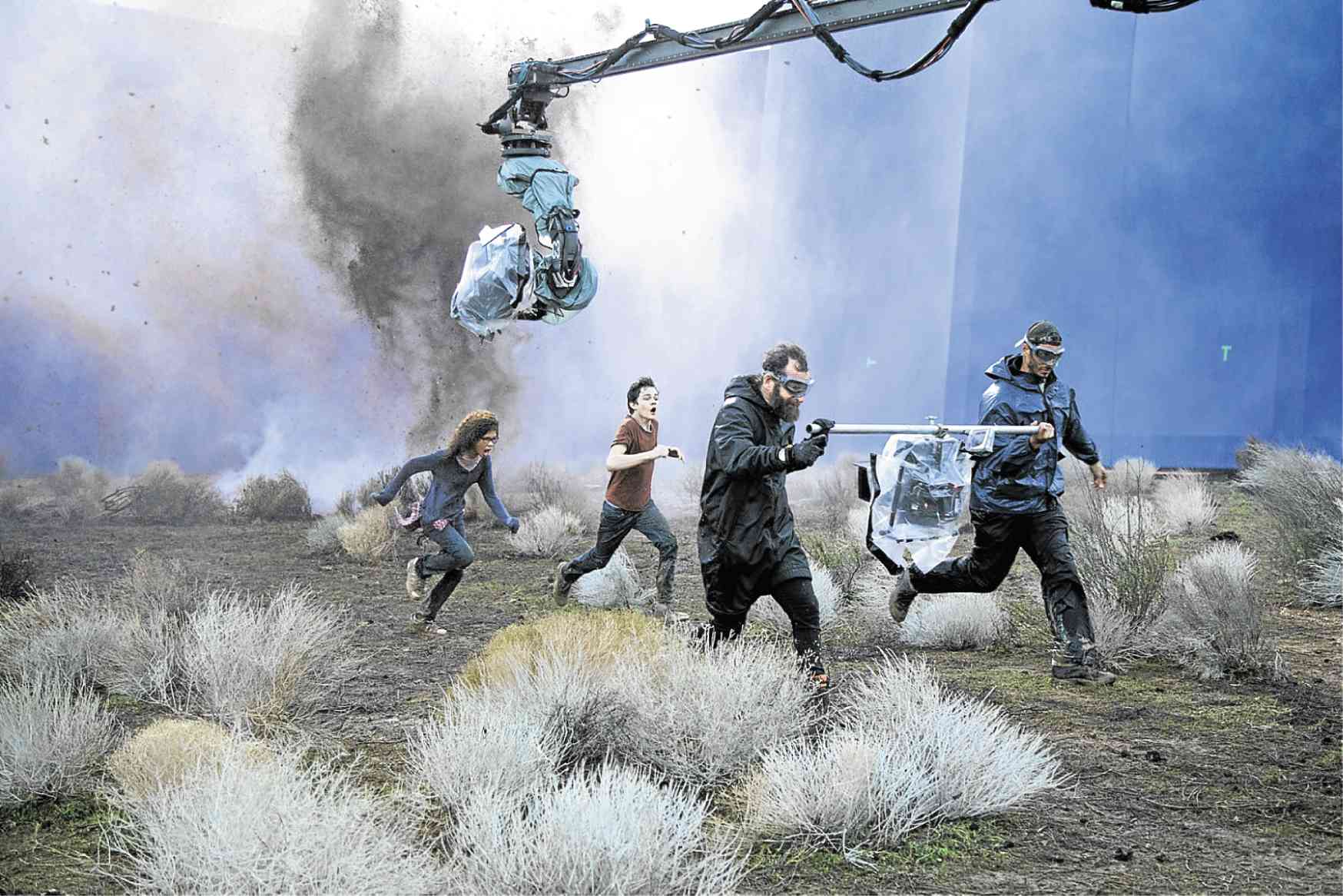 On the set of ‘A Wrinkle in Time’

I’m happy that you’re here,” said director Ava DuVernay as she welcomed us to the set of “A Wrinkle in Time” at Santa Clarita Studios, about an hour’s drive from Los Angeles. Ava, with her long braids and printed cardigan, was a mass of warmth and great energy.

It was Feb. 7, 2017, and their 59th day of filming. “We’re doing this great scene,” Ava said. It was a scene that, coincidentally, happened to be our favorite from the book.

Stage 6, one of the seven soundstages they were occupying at the studios, had been transformed into the ice planet Ixchel. In the center was Aunt Beast (or at least parts of her) being maneuvered by two puppeteers. “She’s 10-feet high and 10-feet wide. She’s a hug on legs, a beanbag of furry love,” said Ava.

Mindy Kaling, who plays Mrs. Who, was onstage too, decked out in a blue and metallic costume that she described as a mix between Bjork and Cleopatra. Her wig was a work of art, too. “Our wig person did all the wigs of Beyoncé in Lemonade,” said Mindy.

We fell silent as they began rolling. “You feel like bliss,” Meg told Aunt Beast.

They shot the scene over and over. At one point, while Storm was pretending to sleep, Ava said, “Relax those eyebrows. Good dreams. Popeye’s chicken, hot sauce, Funions.”

“Are those your happy thoughts?” we asked Storm later.

“Yes,” she said, chuckling. “Those are my favorite food items in the entire world, fried chicken, hot sauce and Funions.”

In between takes, we raided craft services while Mindy looked at her phone screen. “I’m usually not this addicted to my phone, it’s just this casting thing. I wish I was online gambling,” she said.

Mindy’s character Mrs. Who spoke mostly in quotes (Shakespeare, Euripides, Dante) and Mindy said, “It’s really hard for me because I’m a blabbermouth, I have a lot of opinions. This is the one planet where I’m allowed to talk.”

Producer Catherine Hand’s “A Wrinkle in Time” love affair began 50 years ago, when she first read the book.

“A Wrinkle in Time,” written by American writer Madeleine L’Engle and first published in 1962, is a science fantasy novel that tells the tale of young Meg Murry, who, with her genius brother Charles Wallace, friend Calvin O’Keefe, and with the help of three otherworldly ladies, goes on a cosmic adventure in search of her scientist father.

“I was a little girl and I wanted Walt Disney to make it into a movie. And then he died. On the day he died, I made a promise to myself to grow up and make it,” said Catherine.

In a room surrounded by storyboards and artist’s rendering of the different characters and planets, Catherine told us her decades-long “Wrinkle” journey—from becoming good friends with Madeleine L’Engle (“Madeleine said, ‘You go set it up wherever you can and I won’t sign anything unless you’re the producer.’ And that is what tied me to it forever.”) and getting the rights to the book (“Norman Lear said I could go after the rights as long as the president of his company approved. The president of his company at that time was Alan Horn, who is now chair of Disney. My journey began because of Alan Horn and we’re going over the finish line together, 37 years later.”), to the TV movie that she found disappointing (“We had so many constraints in making that picture.”) and to finally making this adaptation. “I have spent all these years trying to get here and I’m very, very excited. I think we’ve brought together a wonderful team.”

Fresh from writing and directing “Frozen,” Jennifer Lee signed on to write the screenplay. “My take was to modernize it and stay true to the book. Working in animation, you always go for that timely but timeless thing. I was originally going to do one draft because I didn’t know what I’d have time to do but I haven’t been able to let it go, no pun intended.”

Jennifer said “A Wrinkle in Time” was her favorite book as a child. “I had never seen a character like Meg, just real and raw and she went through this adventure—a complete wonderful mess. Her triumphs were so genuine and all set amongst this fantastical world and so I was madly in love with it.”

The film is grounded in real science. “We did a lot of research and met with physicists,” said Jennifer. “The book gives us permission to do things some people wouldn’t take a chance on and Disney did. I appreciated that Disney was very supportive of making the best version of ‘A Wrinkle in Time’ that we could do.”

Catherine said, “Some people look at ‘A Wrinkle In Time’ through a political lens, but you can also look at it through a spiritual lens, a scientific lens, as a coming of age story. There are so many different ways people have fallen in love with this story over the years. It resonates in a very universal human level.”

Oprah Winfrey was sitting in front of us in a big tent. Fresh from wardrobe fitting, with jewels on her face, a blonde wig on her head and glitter everywhere, she was half-Oprah and half-Mrs. Which. But who were we kidding? Oprah is Mrs. Which.

Mindy had said, “Oprah was built for this world. She’s just so full of wisdom. It just seeps out of her.”

Ava thought the same thing. “Mrs. Which, all-knowing, the most wise woman in the whole universe, the baddest badass of all—I mean, who else is going to play it?”

Oprah said, “When Ava said she was going to be in New Zealand, I said, I think I’m gonna take a week off and I’m gonna come and watch you shoot. And she said, if you’re gonna come watch me shoot, would you consider reading for Mrs. Which? I said, ‘Sure.’ And then when I was reading the script, I think, ‘I AM MRS. WHICH! Who else would be Mrs. Which? I am Mrs. Which!’”

Oprah said that working on “A Wrinkle in Time” “felt like the culmination of life work.” “I view this not as just a children’s film. I see it as a wisdom teaching for all times. It feels to me like we’re making the new generation of ‘The Wizard of Oz.’ As I’m working on it, I think, oh this must be what people felt like when they were working on ‘The Wizard of Oz.’ It felt magical and it felt wondrous and you’re doing these fantastical things that nobody’s done before, but it also feels everlasting.”

She added, “The things Mrs. Which gets to say to Meg about the darkness and the light, about leaning into the light for yourself, about not resisting and finding the right frequency and having faith in who you are, those are actually words that I said the other night and I think, “Am I Mrs. Which or am I Oprah Winfrey?”

When she finally read it, she said, “I would never have imagined Mrs. Which as myself. You read the book, they are three little white women that you think of as Mrs. Doubtfire, right? You are not expecting this, hun. Baby, this is not what you expected. You should see Mrs. Which’s outfits. Her outfits, they are scaring me. They are so off-the-charts gorgeous.”

Ava’s devotion to diversity and inclusivity did not just show in her casting choices but in her crew as well. On visits to other sets, we had gotten used to seeing crews of mostly white men. But at the ‘A Wrinkle in Time’ set, there were men, women of all ages and colors.

Oprah said, “I think that what Ava does probably as well, or maybe better than anybody else in the business right now, is go after diversity so people can see themselves on camera and also on the crew. I was just standing out here the other day, I was coming out of my trailer and you look at this crew, there’s everybody here. I mean, there’s really a lot of nations represented here on our set. I think the inclusiveness that she has brought both to the crew and you will see reflected up on the screen is a language that will speak to the world.”

Ava cast Reese Witherspoon as Mrs. Whatsit to complete the triumvirate of the Mrs. “Oh my god, when you see those Mrs. together? It’s gonna make your heart soar. We are the new Supremes, honey, I’m telling you,” said Oprah.

The three had a lot of fun behind the scenes. “It’s the most fun I’ve had ever. At 63 years old, the other day, I was literally hanging from a wire and I’m thinking, “When I said I’m no longer gonna do the Oprah show, I did not think I would be hanging on a wire from this ceiling.” It’s been a new experience.”

Mindy had said, “I wish Reese was here. Oprah always says Reese and I are extremely chatty. Oprah’s a little more calm.”

Oprah said, “They are two chatty Cathys all the time. They are talking about every TV show, what they watched last night, who was on it, who was the cutest. You’re standing there in between takes and they’re blah-blah-blah-blah and they’re talking about spas and dresses and clothes. I’ve never seen anything like it. Our trailer is a hootenanny. Reese is the DJ, she’s got all the tunes coming and sometimes I’m like, ‘Hello, can we leave the ’50s? Can we please not have show tunes at 5:30 in the morning?’”

“A Wrinkle in Time” opens on March 14 in cinemas.