Get your 'trolls' on at Universal Studios Singapore | Inquirer Lifestyle ❮ ❯ 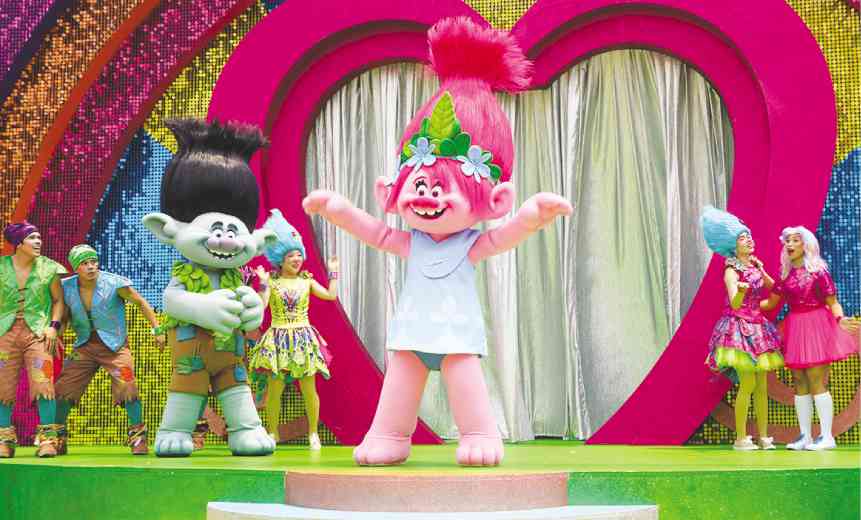 Pink-haired Poppy is the newly crowned queen of Troll Village.

Singapore—Music and magic await every kid and kid-at-heart at Universal Studios Singapore this March and April as the movie-centric theme park brings to colorful life the fantastical world of “Trolls.”

Fans of Poppy and Branch, the funky-haired and rainbow-hued stars of the 2016 DreamWorks Animation musical-comedy, are in for a treat with “TrollsTopia,” a special two-month event at Resorts World Sentosa theme park.

“TrollsTopia” features everything we love about the animated movie “Trolls” and more—from dance-along and sing-along musical performances, to immersive and glittery games, to a chance to become a “citizen” of Troll Village.

Super was front and center at Universal Studios Singapore last March 9, on the first day of “TrollsTopia,” and it was every bit as magical, colorful and fun as the movie.

“TrollsTopia” begins with the “TrollsTopia Show,” a dance parade and musical performance that starts from Hollywood Boulevard, the main road from the theme park entrance, and ends on a glittery, rainbow stage on Hollywood Lagoon.

The show features newly crowned queen of Troll Village, Poppy, her partner-in-crime Branch, and a few of their fun-loving pals. It also includes a performance of “Can’t Stop the Feeling,” the Grammy Award-winning earworm of a theme song by American pop star Justin Timberlake.

The “TrollsTopia Show” is interactive, so get ready if you’re one of the lucky people chosen to take part of it. At the end of the skit, you can get your photos taken with the troll duo and give them a warm hug or two.

Our favorite musical performance, however, has got to be the “Hug Time Trio Show” later in the afternoon.

A trio of fantastic singer-dancers bust a move to and belt out not only dance-able tunes from the movie’s soundtrack but also chart-topping hits like Bruno Mars’ “Finesse” and Camila Cabello’s “Havana.” They will definitely get you to sing your heart out, sway to the beat and just dance, dance, dance all throughout the 12-minute show.

The fun-filled musical experience doesn’t stop there. In “Glitterpalooza”—a mirrored, confetti-filled, disco box featuring the always-sparkly and always-naked Guy Diamond—you and two friends can have a 30-second glitter dance party and maybe even win cool prizes.

By catching as many flying confetti as you can, you’ll get a chance to take home free “Trolls” merch or win food-and-beverage or retail vouchers redeemable at the theme park.

For those looking for something more challenging, why not try the virtual-reality (VR) experiences at Hollywood China Arcade? Through VR booths “Troll Art” and “Beat Feat,” you get to indulge and immerse yourself in a colorful, multidimensional version of the world of “Trolls.”

At the “Troll Art” booth, you can create vibrant and unique works of art with the help of VR goggles and Tilt Brush, a 3D-painting VR application. Let your creativity and imagination run wild as you use a variety of brushes and a seemingly endless color palette to create your masterpieces. Want to take your artwork home? Have it printed or turned into a personalized souvenir.

If dancing and eargasmic tunes are more your jam, “Beat Feat” is the VR experience for you. All you need are your VR goggles, game controllers and, of course, hand-eye coordination to “bash the beats” of the songs from the “Trolls” soundtrack.

But for the ultimate “Trolls” experience, you must get a makeover at the “Trollify Yourself” salon.

With a couple of dabs of face and body paint—expertly applied by “trollification” artists—some glittery temporary tattoos and, of course, an iconic troll wig, you can become a citizen of Troll Village. Don’t forget to get your picture taken against the green screen to get the full “trollified” effect.

Universal Studios Singapore’s “TrollsTopia” runs until April 29. The musical performances and “Glitterpalooza” are part of the regular park admission, while additional charges apply to the VR experiences and