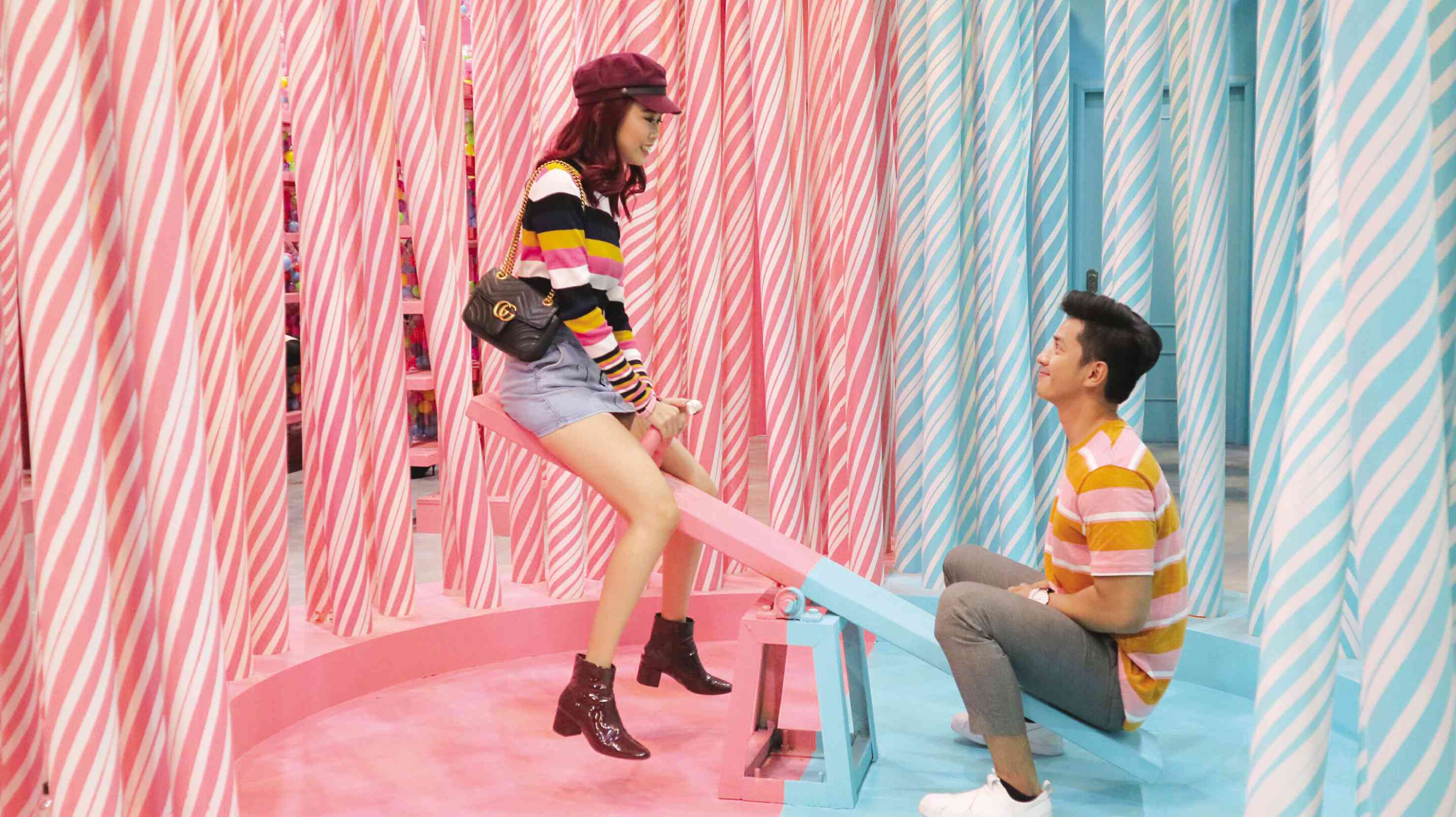 The Candy Cane Grove is where the museum begins to feel like a playground.

The Super guide to the dessert museum

How do you have the best time in the most Instagrammable museum in Manila? You stay off the app.

It’s 2018 and the “pics or it didn’t happen” mindset is something we should all leave in the past. The Dessert Museum in S Maison Conrad is a portal to our childhood daydreams, and would you really prefer to spend an awful amount of time doing things for the ’Gram?

We know the entire place is begging to be photographed, but the Dessert Museum is more than the epicenter of pastel-colored social media posts—it is an adult playground, indulging the inner sweet-toothed in every one of us.

“Remember the feeling when you first saw a ball pit? A bouncy castle?” co-owner Nikko Que says. “It’s the same thing with desserts. Combine all those giddy feelings we had as kids, and try to reenact it at this stage with an expectation of an adult—that’s why we made everything a hundred times larger,” he adds.

And we agree—there’s wonderment in each of the Dessert Museum’s eight rooms. Every wall is painted in a different color than the last, and the larger-than-life sweet treats still surprise you even when you’ve seen hundred of its photos online—and for our inner nerds, you’ll come home with the wackiest fun facts to share.

“The Doughnut Room is my wife and I’s favorite, and it’s the first room. The idea was to have a room full of doughnuts, and to enter you have to go on a slide and the adventure starts from there,” Nikko tells Super.

“It’s like a rabbit hole from ‘Alice in Wonderland’ where you go down the rabbit hole. But since it’s the Dessert Museum, to enter this world you’d have to go down the doughnut hole,” he says.

This room is the type of place Homer Simpson would go crazy for, but before you get dazzled by the hanging doughnuts, we gotta tell you those little bludgers hurt.

Did you know that doughnuts cook more evenly because of the hole in the middle of this treat? There are just so much fun facts you get to discover if you take time to read the museum’s walls!

You have to squish yourself through stuffy marshmallow doors to enter this room, and you will immediately get a whiff of that scrumptious vanilla smell. Don’t be fooled, it’s not the marshmallow curtains—there’s actually real marshmallows in this room! You’ll spot them as the fluffy clouds of the liquorice rainbow. We thought it was some sort of life-like visual art, but it’s actually the real deal!

Super tip: This is the room where you can snack on the most desserts, so go ahead and get as much palm-size marshmallows in a skewer and try all the fondue flavors.

Before you enter this room, you’re faced with two doors asking if you’re naughty or nice. Don’t worry, either way you’ll be rewarded by     fruit-flavored macarons. The Candy Cane Grove is where the museum starts to feel like a playground—there’s a a see-saw in the middle of the room, a swing set, a huge jump rope, and there’s just something added to its corners every week.

Next up is the coolest room of the museum, and it’s filled with hundreds of balloons you’ll feel as giddy as Russell from Disney’s “Up.” The have fresh-fruit popsicles for everyone to enjoy, but we hope the soft-serve machine will be up and running in the coming weeks because we just can’t get enough of that cold vanilla goodness. After reading some trivia in this room, we’d like to shift to a new career and become official ice cream taste-testers using only golden spoons.

Seven people can fit inside the room’s inflatable gumball machine and balloons endlessly swirl around you as try to keep your balance. While waiting to go inside the machine, pop some bubbles or be trapped inside one.

The Gummy Bear Room feels like it’s taken straight out from Katy Perry’s “California Dreams” music video. Cuddle with the gigantic gummy bears or count just how many of these gummy goodies (which, by the way, originated from Germany) are stuck on the walls. This room also has a trampoline you never wanna get off from and there’s a corner dedicated to mini bath tubs filled with plastic candy, which totally reminds us of The Ice Cream Museum’s sprinkles swimming pool.

Pink lovers will go crazy for this fairy floss-themed room. Imagine yourself strolling across Sakura trees, except the branches are holding soft and fluffy pink cotton candy. It looks like a world from Dr. Seuss’ books. The Dessert Museum also has the finest-stringed cotton candy fluffs we’ve tasted, and the best part? There’s milk powder sprinkled on top of this carnival-favorite treat!

While you’re being schooled on the history of cake, hop on the metal cake pops while munching on some real baked-chocolate goodies. If these cake pop seats make you feel like posing like Miley Cyrus during her “Wrecking Ball” stage, well no one is stopping you—we’ve all done it!

“We don’t want people to think that it’s just for Instagram,” Nikko explains. “This will be an evolving thing—the rooms are gonna change eventually. There will be new desserts to come out for sure, and those will be new themes for us to play around it,” he shares.

Nikko says the museum is going to get a lot more interactive—visitors making ready-to-take-home desserts inside, sugar-fuelled talks and performances, and different desserts in the spotlight. Just imagining the new experiments and experiences is already giving us a sugar high!