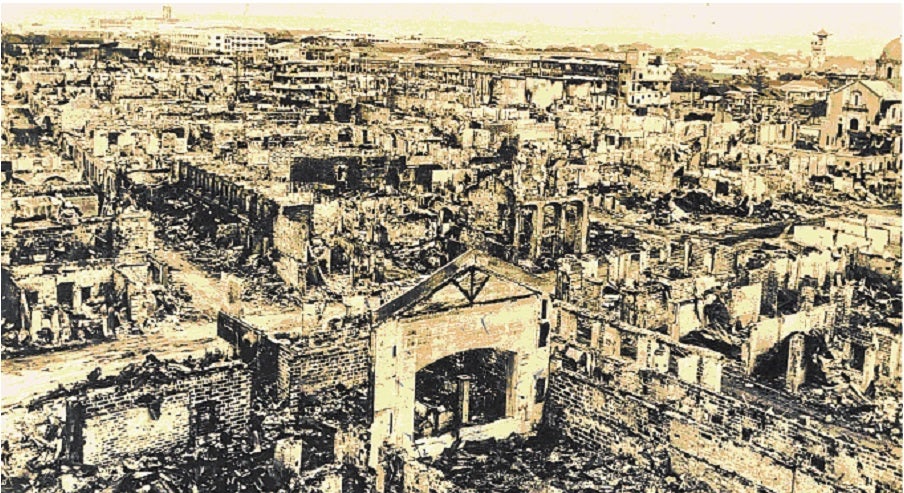 The month of February 2018 was again the occasion to commemorate the Battle for Manila, the largest mass killing and destruction in Philippine history. There was attendance by diplomats and of young sincerely peace-loving Japanese.

There were reminiscences galore, and a setting forth of the issue by Memorare Manila 1945 Foundation at the annual Intramuros program. Memorare officials and a Filipino historian gave out the point of view of the 100,000 noncombatant victims.

But there were also some who should have known better mouthing some rather glaring errors. Chief among those errors was the charge that most of Manila was destroyed by American shellfire.

A cursory examination of the facts reveals the falsity of this claim. The most serious damage to Manila was the complete wrecking of the city’s public utility infrastructure—electric power generation, telephone exchanges, the municipal gas system (never to be restored), the streetcar service (also never to be restored), and the blasting of the Pasig river bridges. Moreover the main business district along the Escolta was demolished with explosive charges. None of these was done by the Americans. It was an entirely Japanese accomplishment.

Aside from the ruin of the city’s public utility infrastructure, there was a whole list of massacres.

The German Club (most horrible)

Arias Building at Rizal Ave. and Plaza Goiti, where Japanese riflemen on the upper stories of the Great Eastern Hotel shot at victims fleeing fires

The Franciscan and Capunchin churches in Intramuros, where the priests were burned or buried alive.

Aside from the identified massacre sites, there were numerous unnamed ones. The Japanese would position machine guns at intersections, then start burning the surrounding residential blocks. As the panic-stricken victims fled the flames, they were gunned down. Shellfire demolishes, but fire consumes completely.

Another error one some times heard is that those who committed the atrocities were Koreans, not Japanese. This appears to be Japanese propaganda to deflect blame for the massacres. But there were no Korean combat units in Manila, only some camp guards and dock workers who readily surrendered when the Americans came up.

Another error sometimes heard is that the Americans used aerial bombing during the battle. Those of us who lived through the battle can testify that this was not true.

What was used, some times excessively and indiscriminately, was heavy artillery. MacArthur had thought to minimize damage by forbidding air attacks, but the infantry commanders on the ground felt necessary to resort to artillery to protect their foot soldiers and assist in assaulting strongly fortified buildings like the Finance Building and the Old Legislative Building.

The Japanese did their share of the shelling. Salvaged naval guns were lined up on the Luneta. There were over two dozen heavy pieces on Intramuros walls (one still remains there), giving the lie to Yamashita’s prevaricating claim that he was pulling supplies and arms out of Manila.

In Sampaloc Japanese incendiary shells burned Our Lady of Loreto church and the adjacent blocks. We ourselves in distant Balic-balic were not spared. At least two shells whooshed overhead, and one of them fell about 100 feet from where I was desperately hugging the ground.

The Santo Tomas internment camp was shelled with about two dozen deaths, besides Filipinos in the neighborhood, one of whom was a distant relative of mine.

Of course there is no gainsaying that American shellfire caused damage and casualties, but the latter were a minority. One military columnist put shellfire casualties at 40 percent of the total, Memorare Manila 1945 Foundation after an informal poll put the figure at 30 percent. I myself rely on the detailed list of names in the appendix to Antonio Perez de Olaguer’s “El Terror Amarillo en Filipinas,” and come up with a figure, of 15 per cent. This is from a concrete statistical sample, not a long-after survey.

But trying to pin responsibility for casualties is absurd and morally irrelevant. The blame falls on those who ordered Manila turned into a battleground and killing field, and these were none other than the Japanese. Whoever gave that order was singularly stupid, because it caused his government diplomatic difficulties and the payment of indemnity to affected neutrals. –CONTRIBUTED