A wedding 14 years in the making | Lifestyle.INQ ❮ ❯ 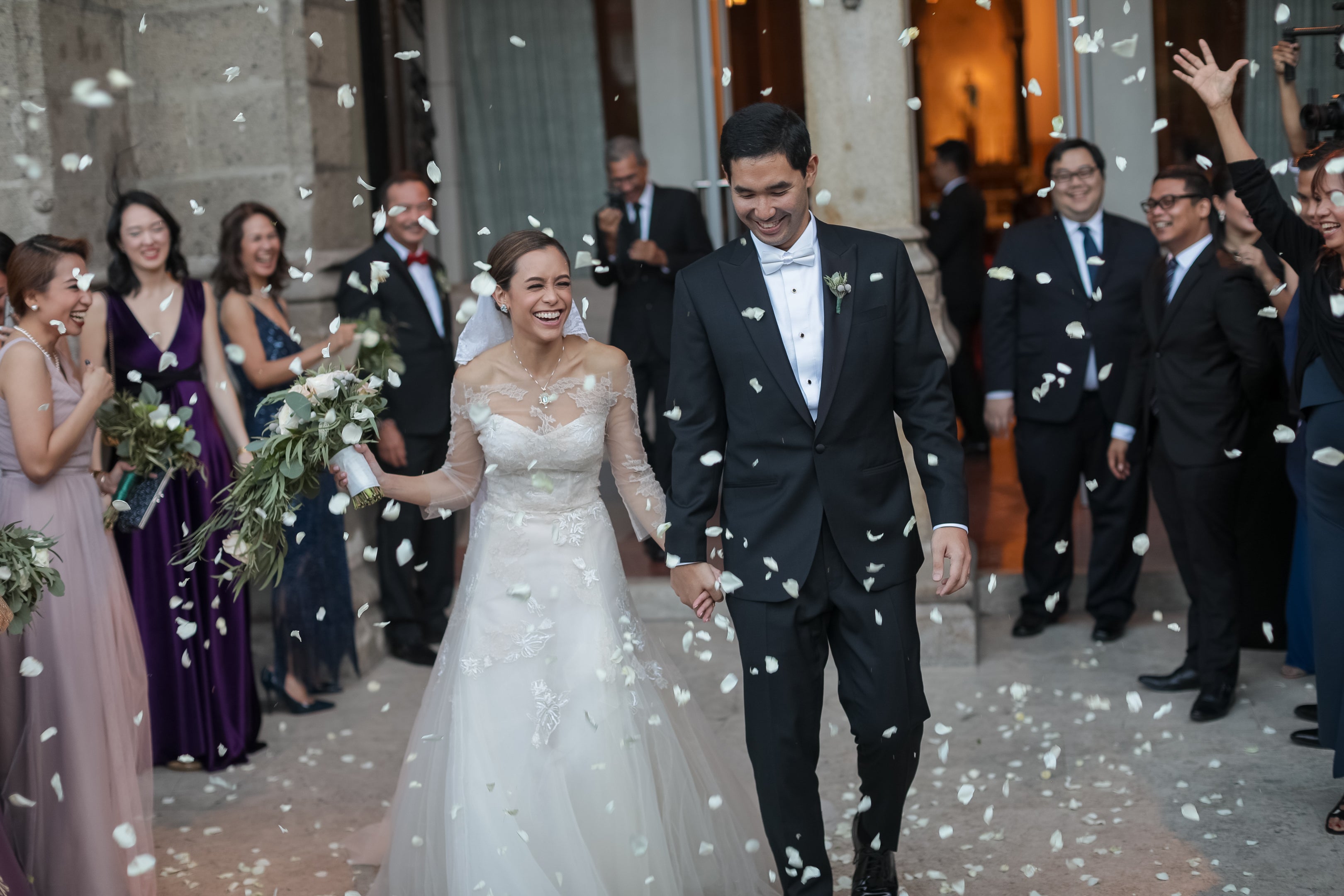 The bride and groom emerge from the cathedral in a shower of floral goodwill.

A wedding 14 years in the making

In 2002, two teenagers met in a restaurant in Fort Bonifacio, Taguig. Claudia Squillantini spent most of her time looking at her Nokia 3310, much to the dismay of her seatmate, Gaston Perez de Tagle.

Fourteen years later, in January 2018, they were married.

Their relationship saw them both through high school, university in two different countries, and law school at Ateneo.

Gaston planned to propose after both he and Claudia had passed their bar examinations.

Mindful of the importance Claudia placed on family, Gaston asked his intended fiancée’s parents, Enzo and Alessandra Squillantini, for their blessing. They were happy to give it, after having checked to make sure the engagement ring was, of course, worthy of their firstborn.

On Dec. 27, 2016, Gaston crashed a dinner party Claudia was holding for her closest friends (much to her annoyance). He insisted on driving her home before the party headed out for drinks, whereupon they were greeted by Claudia’s beloved beagle, Milotis Amfufu Squillantini or Milo. This time, however, he had a little backpack on.

When Claudia inspected his little backpack, she found the ring inside it. Gaston knelt and, with Milo beside him, asked Claudia to be his wife. Once she accepted, Claudia’s family emerged from the shadows, all wielding cameras, cheerfully recording the emotional event.

The year 2017 was filled with wedding preparations involving friends and family from Hong Kong and Vancouver to Los Angeles and London.

The wedding took place in the newly-renovated Manila Cathedral last Jan. 12. It was a fitting setting for the gorgeous ceremony, meticulously planned by wedding coordinator JP Montilla. The bride walked in to a flourish of music through gauzy white curtains set up near the cathedral’s main entrance.

Arianne Abela, who flew in from San Francisco for the occasion, sang the “Ave Maria,” accompanied by her husband, Noah Horn, at the organ.

The bride made sure she wore something old (an heirloom veil worn by her grandmother and mother in their weddings), something new (her dress, by Losa Angeles-based Filipino designer Monique Lhuillier), something borrowed (a traditional payneta from Chloe Romulo Periquet) and something blue (her jewelry).

After the ceremony, the party headed to Blue Leaf Filipinas, near Manila Bay. As a spectacular Manila sunset painted the sky red, guests mingled in the outdoor courtyard for cocktails, then were ushered into the reception hall, a fairyland garden magically created by stylist Jo Claraval.

The event was catered by chef Billy King, head chef at The Manor at Camp John Hay. A four-corner buffet was set up; a salad bar with crisp Baguio greens and an oyster bar full of fresh Palawan shellfish provided the starters. Main dishes ranged from salmon to chicken to roast beef, with trays of buttered vegetables and pasta stations for freshly-made plates. The dessert stations boasted fountains of milk chocolate, croquembouche towers and traditional French desserts.

After moving speeches from the fathers of the bride and groom, the best man and the maid of honor, it was time to hit the dance floor. With Claudia, an alumna of Steps and many of her fellow alumni leading the dance, everyone was dancing to the sound of 8Track’s disco hits. The bride changed into a Madonna-inspired white pantsuit with a sparkly bustier by Mark Bumgarner.

The party continued into the wee hours with DJ Javi and DJ Toby Panlilio. Later in the evening, a fully-stocked Potato Corner appeared, and was a hit with the remaining guests.