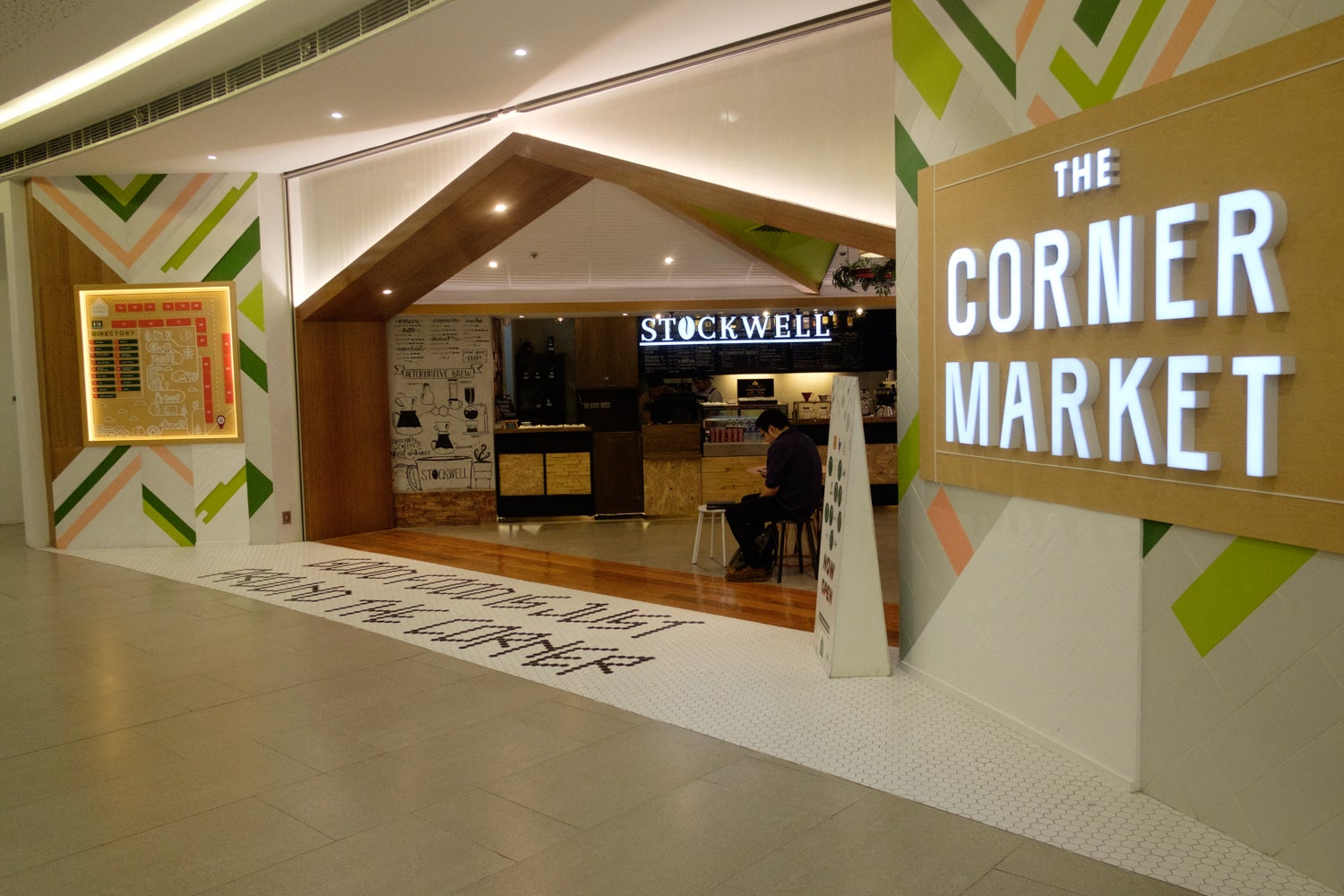 2018 is the year of the food hall. It took the United States by storm in 2015, and today there are over a hundred spread across America.

The wave has apparently caught on in Manila with the March 21 opening of The Corner Market at Podium in Ortigas Center, Mandaluyong.

Located on the second floor of Podium’s newly renovated shopping mall, The Corner Market is a 1,200-square-meter sprawl run by the Relish Group and composed of tenants that supply actual, if not fresh, produce, giving guests a farmers’ market experience inside a mall.

The food hall’s top attraction is Gusto, which brings in naturally grown vegetables and fresh flowers from a family-run farm in Rizal. Shoppers can get seasonal produce such as avocado, turmeric, turnips, succulents and orchids from the open pantry, and enjoy farm-to-fork salads, smoothies and buddha bowls composed of heirloom rice, adlai, vermicelli or soba.

“We wanted to make farm-to-table very casual and accessible for people,” says owner Pia Ojeda. “We wanted it to be an everyday thing, to make fresh food available to everyone. No preservatives and no MSG. Just honest and clean food.”

There’s also Meat Depot Mini, a meat supplier with a butchery/restaurant in BF Homes Parañaque. Customers can choose from a range of cuts (all vacuum sealed)—from beef tenderloin, Angus beef tomahawk, to lamb rib rack, and have them grilled on the spot, with sidings such as mashed potatoes or rice, and an array of condiments.

The Catch of the Day is the concept of seafood supplier Cold Storage, developed specifically for the food hall. Its products include Norwegian salmon, premium scallop, unagi, yellowfin tuna, squid rings and Maine lobster, which you can have either grilled, poached or fried. For an additional P120, you get a side dish like sautéed vegetables and dipping sauce.

“We were very conscious about wanting to work with a mix of established and new brands, so that we would have something for everyone,” says Linfred Yap, managing partner at the Relish Group.

“Strategically, we want to have the variety you would find in a food court, but with the quality and taste profile of a full restaurant. We’re looking at people spending an average of P250 per visit, which is a great, sweet spot.”

Also part of the ensemble is Sundays by Kelvin Ngo of Merry Moo, who wanted to connect closer to his guests and offer them a more complete experience. In his vibrant and colorful space, he is offering a wide variety of soft-serve ice cream on homemade flavored waffle cone, ranging from ube and coconut to black sesame, caramel and green tea, with playful and unique toppings.

Like Sundays, customization is also key at Easy, Tiger by Al Purruganan, the man behind Tamarind at SM Aura and Jatujak at SM Megamall. What makes this different from his other Thai restaurants is the trendy take on the cuisine and his food portions—single serve rather than for sharing.

Barcelon de Calderon—an offshoot of Spanish restaurant Calderon—plates tapas like croquetas, calamares and chorizo alongside bebidas like sangria. Specialties like lengua con setas and callos may tease the palate, but it’s the solo-size paella, available in six varieties (negra, valenciana marinera, to name a few) and priced at just P150, that inevitably wins the vote.

Popular Poblacion shack El Chupacabra was initially hesitant to operate inside a mall, but a little convincing from the Relish Group eventually led to La Taqueria del Chupacabra, which sells the Mexican joint’s bestsellers like tacos (the hard-shell and soft, open-faced kind), quesadilla, burrito, and fajitas.

Cà Phê Saigon, run by a family with Vietnamese roots, offers traditional Vietnamese dishes—from pho and vegetable rolls to dry noodles and banh mi—based on heirloom recipes. The stall has a vertical garden where customers can pick fresh basil leaves to put in their warm noodle soups.

Inari, named after the Shinto god believed to have a fondness for fried tofu, is a Japanese joint specializing in kushikatsu and kushiyaki (fried or grilled skewers), sushi rolls made with black rice, and tofu pockets filled with sushi rice and tuna, salmon, crab, catfish or mushroom.

Char is an import from Singapore, started by two brothers who developed and perfected the beloved char siu for a year. It offers roast duck, buttered prawns, and kampong soya chicken, but the signature dish, Chinese BBQ pork, marinated in a secret sauce and has gone through a three-stage cooking process to retain its moisture and tenderness, is the main draw.

Birdhouse extends its menu with jumbo chicken wings drenched in creative flavors —bacon, mac and cheese; caramel and cheese popcorn; roasted garlic parmesan—and the newly introduced honey butter chicken sandwich. Those are added to what they’re already known for, which is the fusion fried chicken with a host of sides such as elote corn, dirty rice, mac and cheese.

Rabbit Hole Manila is the resident bakery-patisserie. It has a shop in Malugay, Makati, and Podium is its first foray into a more commercial space. Its classic cakes are a bit unrecognizable as they come in more refreshing forms.

Take the Brazo de Mercedes, which is presented as layered meringue, rather than a rolled one. Its line of keto cakes are your sinful indulgence without the guilt.

The Corner Market will host weekend activities every other week starting May, from arts and crafts classes to Korean lunchbox tutorials.

“There are many great food halls abroad and I always felt like we didn’t have our own version in Manila,” says Yap. “We do have public markets and dampa but we wanted to create a more premium and global version, in line with the standards of what we find abroad.”

The Corner Market finally fills in that gap. CONTRIBUTED