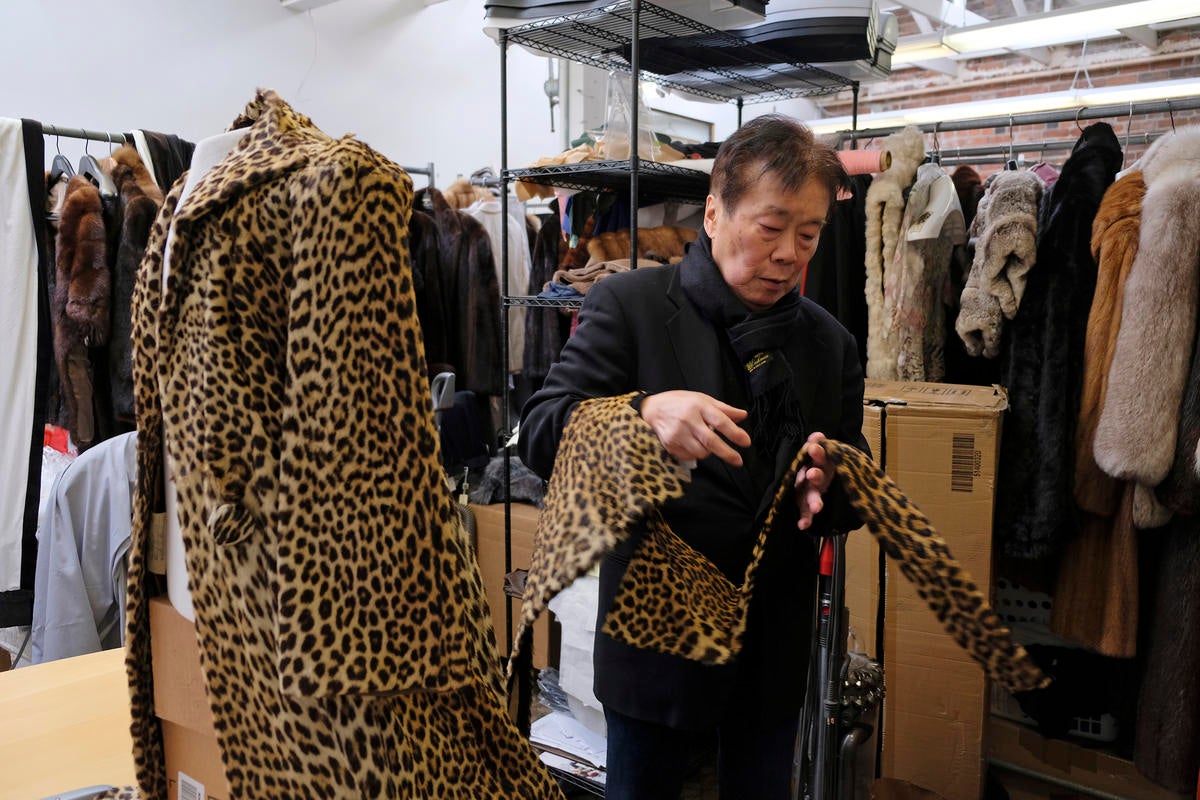 In this photo taken on Friday, March 16, 2018, Benjamin Lin looks over a 60-year-old cheetah jacket he is restoring at the B.B. Hawk showroom in San Francisco. San Francisco becomes the largest US city to ban the sale of fur items, a move that would hearten animal lovers but frustrate niche business owners who say they are fed up with a city that dictates what retailers can or cannot sell. The ban was approved by the Board of Supervisors on Tuesday, March 20, 2018. San Francisco joins two other California cities, West Hollywood and Berkeley, in saying no to a symbol of glamour that animal advocates say is built on cruelty and does not reflect the city's values. (AP Photo/Eric Risberg)

SAN FRANCISCO — San Francisco supervisors voted unanimously to ban the sale of fur, further making the city’s animal-loving credentials shine, as it becomes the largest city in the United States to approve such prohibition.

Animal welfare advocates around the world cheered news of Tuesday’s vote, applauding the city for its compassion, and hoping the legislation will catch on.

The ban takes effect January 1, and applies to anything that features real fur – including coats, key chains, and gloves. An amendment added on Tuesday allows furriers and other retailers to sell current inventory until January 1, 2020.

Wayne Hsiung, co-founder of animal rights network Direct Action Everywhere, said in a statement that “this historic act will usher in a new wave of animal rights legislation across the globe.”

Retailers in San Francisco, however, balked at what they called another social mandate at the cost of their ability to make a living.

“It should be a citywide public vote, it shouldn’t be decided by the Board of Supervisors,” said Skip Pas, chief executive officer of West Coast Leather, which sells fur-trimmed items but deals largely in leather.

San Francisco, named for the patron saint of animals, has a reputation for a strong social conscience, often at a cost to businesses.

Its board banned the sale of menthol cigarettes and other flavored tobacco, which voters will consider in June. In 2016, San Francisco approved what was then a groundbreaking paid parental leave law, requiring private employers to offer six weeks of fully paid leave.

Katy Tang, the supervisor behind the fur ban legislation, has successfully pushed to prohibit performances by exotic animals and to forbid the sale of non-rescue cats and dogs from pet stores.

Mayor Mark Farrell said he plans to sign the legislation.

About 50 clothing and accessory retailers downtown will be affected by the legislation, according to Jim Lazarus, senior vice president of public policy at the San Francisco Chamber of Commerce. Reselling vintage and used fur by outlets not usually in the business of trading fur, such as secondhand stores, pawnshops, and nonprofits, will still be allowed.

The chamber estimated San Francisco fur sales account for at least $40 million a year. The city’s Office of Economic Analysis estimated fur sales at $11 million in 2012, based on census figures.

The city said even if sales numbers are much higher than its estimate, a prohibition is unlikely to significantly harm the overall local economy.

The Fur Information Council of America and the International Fur Federation wrote to supervisors before the vote, seeking to partner with the city to launch a rigorous certification program that it said would ensure animal and environmental health.

The organizations did not have immediate comment on the result of Tuesday’s vote.

The prohibition will hit retailers large and small, although smaller businesses will probably have a harder time adjusting. Luxury department stores Neiman Marcus and Saks Fifth Avenue both feature fur salons. Representatives for the stores did not respond to requests for comment.

He is considering keeping his current location but selling fur at a smaller place nearby, outside San Francisco.

“I cannot fight it,” he said of the ban. “I will not win. I do not have the energy and the money.”