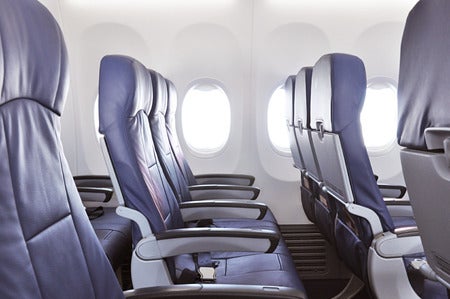 Thai Airways is getting flak after banning oversized passengers from flying business class aboard its newly acquired Dreamliner aircrafts, for safety reasons.

The carrier’s intentions are well-meaning: business class seats aboard the Boeing 787-9 Dreamliners have been installed with seat belts that come with an airbag system that can deploy in an emergency.

But the mechanism means that seatbelt extensions which are normally offered to overweight and obese passengers, can’t be used, reported The Bangkok Post.

That means that flying business class is restricted to travelers with waistlines that don’t exceed 56 inches.

“We are sorry for the inconvenience. It’s due to safety regulations and the seat belt contains an airbag, and therefore it can’t be extended,” the airline posted on Twitter in response to angry queries about the policy.

The restriction also means that passengers flying business class on the Dreamliner cannot fly with infants, who generally need to be held in an adult’s lap during take-off and landing.

It’s not the first time an airline has gotten heat for policies regarding overweight and obese flyers.

Last year, Finnair began asking passengers to voluntarily step on the scale as part of a data-collecting project on airplane loads.

In 2013, Samoa Air made headlines when it announced plans to charge passengers based on their body mass.

Hawaiian Airlines also conducted a voluntary survey in 2016 asking passengers to step on the scale with their carry-on luggage as part of a fuel-saving, weight-distribution and safety measure. JB