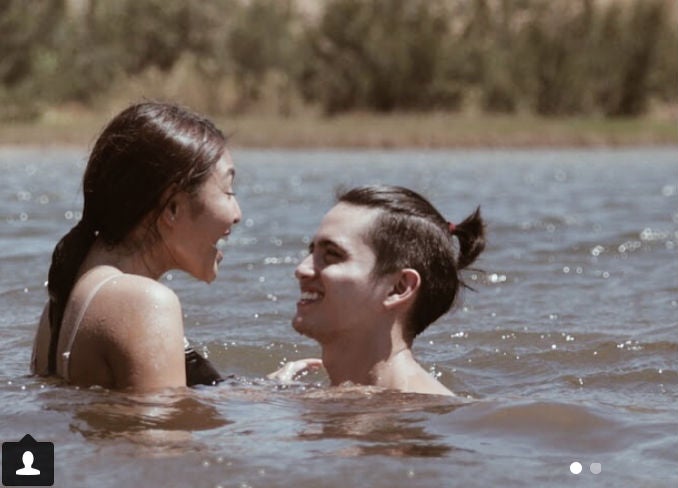 JaDine gets spontaneous this summer

My house looks like a crystal shop!” James Reid declared. His girlfriend Nadine Lustre started collecting crystals last year, after buying a “starter pack” in London while shooting for their current movie “Never Not Love You.”

“When we got back to the Philippines, I looked for a crystal seller,” Nadine went on.

“And she bought his whole shop!” James exclaimed.

Her birthstone is opal—a beautiful white “soft” stone that flashes iridescent specks of orange, yellow, purple and blue when hit by the light; James’ is emerald, a precious green gem. These vibrant colors also make up the palette of Folded & Hung’s summer collection, which “JaDine” (a portmanteau of the couple’s names) recently presented at Sofitel Philippine Plaza Manila.

“Summer is a feeling. It’s an emotion, not a season,” Folded & Hung creative design manager Joel Andrade explained. “Not everyone has the luxury of time to go to the beach, such as James and Nadine, so we created pieces that will make summer happen.”

Folded & Hung’s 2018 summer collection has an urban tropical theme. It features fresh, wearable pieces that are part-street style, part-resort wear, which can be layered and styled for the beach or the mall—even for work.

Nadine’s outfit, for example, was a red cropped tube top with frilly hem and dainty sleeves. For road trips, it can be paired with a denim skirt or white shorts. For the launch, she wore the cute top with a pair of pinstripe navy flares which, when worn with a crisp white shirt, can easily be office pants.

Folded & Hung swimwear, high-waist shorts and belly-baring cropped tops are Nadine’s favorite pieces (we would wear those, too, if we had her abs). She would accessorize these with a stack of bangles and rings, gold hoop earrings, or a statement necklace.

“I love this ’80s-style chiffon board shorts that shows the outline of the bikini for the
shy ‘hubadera-at-heart,’” Joel beamed, as he showed us the sexy pair.

Our favorite would be the frond-print pajama co-ords—a set of shorts and short-sleeve pajama shirt in stretchy knit. An example of a good oversized thing, it is boxy, flowy and very forgiving to any body type.

For men, Folded & Hung’s summer items are updated casuals, such as the dark short-sleeve shirt with pineapple prints on James, which he wore with light-wash distressed jeans and staple white sneakers.

“The Hawaiian shirts, with flattering Cuban collars, are done in fabrics of different weights: rayon, linen and poplin,” Joel explained, holding up a blue shirt constructed with the “wrong side” out to achieve a worn-in look.

Joel’s most inspired piece, no doubt, is the “Oliver” board shorts in “Gen Z yellow,” a reference to the retro pair worn by actor Armie Hammer in the coming-of-age movie “Call Me by Your Name.”

For bags, Folded & Hung has beach totes and the so on-trend fanny pack which is meant to be worn across the chest. James was about to buy such “bum bag” in London, but Nadine discouraged him, because it turned out to be her anniversary gift.

“We trust each other’s fashion sense,” James said. “She can wear anything except boyfriend jeans. I don’t understand boyfriend jeans, and baggy clothes.”

The couple’s trips have been mostly for work, and soon, they want to spend holidays in “exotic places” such as India, Egypt and Morocco.

Traveling together allows them to discover more about each other, James added, even if packing has been “very stressful.”

“We usually pack hours before a flight,” he said. “I never have to pack my own toiletries; girls pack better than boys.”

Nadine agreed: “Our stuff are everywhere and we can’t relax till we’re sitting in a plane.”

Eventually, Nadine wants to hike in places where crystals can be naturally mined, while James dreams of living on the beach.

“I am extremely spontaneous. I figure out what to do when we get to the destination,” James went on.

Nadine is just as game: “I just go along with James, and Folded & Hung is just like us—very creative, spontaneous and fun.