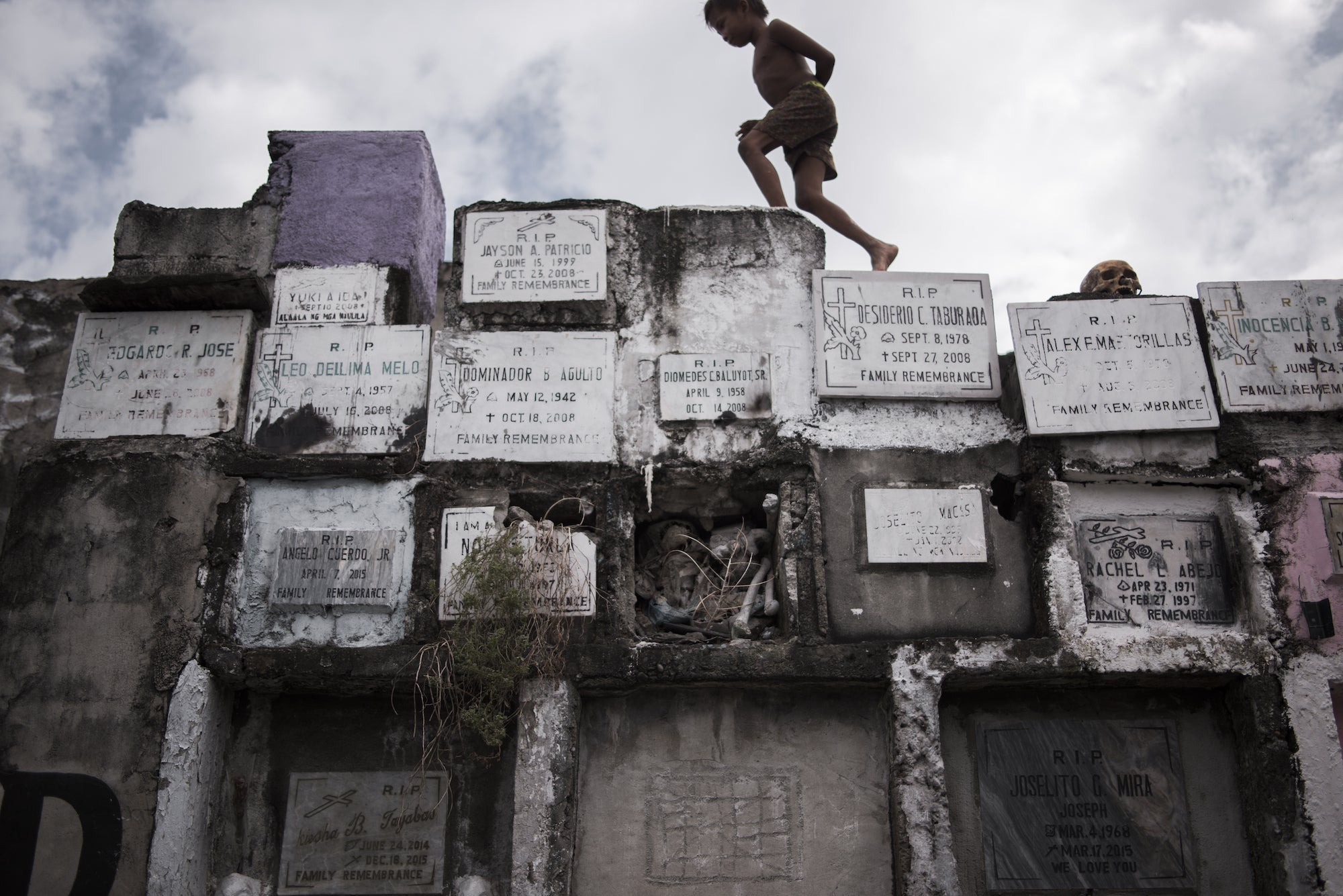 A boy playing on top of apartment-type graves in Navotas Public Cemetery. The Cemetery where bodies of unclaimed victims who were killed on the drug war was buried in a mass burial. It is also known as one of the dumping grounds of people killed by summary execution - Photo by Carlo Gabuco

‘Everyday Impunity’: How documentary photographers are telling a secret history

It was the stench that finally got to photographer Carlo Gabuco, a combination of rotting human flesh, embalming fluid and insect spray that he couldn’t get out of his nostrils no matter how hard he tried.

For months on end, he and other photojournalists had been working the graveyard shift
—literally—covering the nightly killings that had become the hallmark of the Duterte government’s murderous war on drugs. The sight of bullet-riddled bodies was par for the course. He had lost count of how many he had photographed.

But this was carnage of a different order.

“The only time I ever felt tired, and that it was too sick already, was the mass burial in Navotas,” he recalls.

To make room in its morgue, a funeral parlor was burying 13 unclaimed bodies, all drug war casualties, they said. The bodies were stacked in a van, one on top of the other. Roaches were crawling all over them—that was what the insecticide was for.

The final indignity was the morgue attendant tamping the last body down with his foot so it would fit in the shallow mass grave.

“I was overwhelmed by what I saw,” he says. “It was too graphic even for me. I was really disturbed by the smell.”

He felt he had to get as far away as he could from the killing, so he rented a car and took off with his girlfriend for Baguio.

Four days later, he was back on the beat.

It was, after all, his job, although one that involved a high risk of posttraumatic stress disorder (PTSD). War photographers, it has been well-documented, carry the same risk of developing PTSD as combatants.

“I have to acknowledge that it changes something in you,” he says. “But I don’t want it to be about me, because I feel my emotions are irrelevant to what’s happening. Of course, it comes out in the pictures.”

Photographing extrajudicial murder is nothing new. One of the most famous news photographs ever published is of an extrajudicial killing: Eddie Adams’ unforgettable image of a South Vietnamese general putting a bullet in the head of a captured Viet Cong guerrilla, taken 50 years ago. Many people believe it turned the tide of public opinion in the United States against the Vietnam War.

What is unprecedented is the sheer number of images generated by the death toll in the government’s antidrug campaign. Apart from Gabuco, several other photographers have felt compelled to document the war on drugs and its unintended consequences.

Last year, Gabuco’s photographs won him a grant from the Magnum Foundation Fund, which resulted in “Less Than Human,” a harrowing look at the other casualties of the drug war: the surviving family members, many of them children.

Of the six children he followed for his documentary, four had witnessed how their parents were killed. The youngest, a 4-year-old boy, told of seeing his dead father in his dreams, his head still wrapped in packing tape. The others told of being bullied in school, or treated as pariahs by their neighbors.

“It’s all right to speak against the killings, but if there are roughly 20,000 victims, how many more orphans are left behind?” asks the photographer.

“This is unprecedented. I don’t think we have the capability to handle this. The government’s slogan is ‘change.’ What if you have a culture that is being formed based on violence and impunity? It’s unsettling.”

This is precisely the question being asked by “Everyday Impunity,” the exhibition space which turned out to be the surprise hit of Art Fair Philippines 2018 earlier last month, with lines of people forming to see the “death chair.”

Apart from a wall of photographs, the centerpiece of the installation, titled “Ang Mga Walang Pangalan” (after a poem by Pete Lacaba), was the actual chair where a drug suspect from Payatas was sitting when he was shot by unidentified gunmen. A laser sight draws the eye to the hole in the chair made by the bullet as it exited the victim’s body. Over a hidden speaker, his 12-year-old daughter’s eyewitness account of the slaying plays on a loop together with music.

Visitors are invited to sit in the chair and imagine themselves in the place of the victim. And if they wish, take a selfie. Many did.

Gabuco is painfully aware of the ethically ambiguous position this puts him in. Although he obtained permission from the victim’s family and explained the purpose of the exhibit, he wasn’t sure how they would react to strangers sitting in their father’s favorite chair and taking selfies.

“That’s what bothers me most, the idea that somehow, I might have benefited from their misfortunes,” he says. “I have to get in the right headspace and think ‘it’s not for you to benefit your career.’ We were looking for the most effective platform, the most responsible way to communicate the killings that are happening, and for me and Erwin, the Art Fair was the perfect venue.”

Along with what he calls the “moral damage” of turning death into art was the question: Would doing so make people more or less sensitized to the gruesome reality depicted? As Susan Sontag wrote in her essay on war photography “Regarding the Pain of Others”:

“…while an event known through photographs certainly becomes more real than it would have been had one never seen the photographs, after repeated exposure it also becomes less real. As much as they create sympathy, I wrote, photographs shrivel sympathy. Is this true? I thought it was when I wrote it. I’m not so sure now. What is the evidence that photographs have a diminishing impact, that our culture of spectatorship neutralizes the moral force of photographs of atrocities?”

Gabuco says at the end of the day, it’s work: What remains is his desire to document the times that we live in.

“I’m more sensitive about what we cover. If I feel this way, what more them?” he asks, referring to the survivors. “When you’re confronted by crying family members, you can’t avoid being affected as a human being: your humanity kicks in every time, your sense of justice.”

Taking photographs and exhibiting them gives him a wider audience and a louder voice, he says, but it comes at a cost.

A Fine Arts graduate of the Philippine Women’s University, the 35-year-old Gabuco had been mentored by curator Bobi Valenzuela and was already on his way to establishing himself as a painter when he discovered documentary photography.

While he was working on an exhibit at Casa San Miguel, painter Elmer Borlongan showed him a book of photos published by the Magnum photo agency. In particular, a portrait by James Nachtwey of a survivor of the Rwanda massacres left its imprint on him.

Heavily influenced by the social realists, his own paintings tended toward the dark side of modern urban life in the Philippines, and were similarly preoccupied with death and violence, although leavened with a bit of black humor.

The realization that photography could be just as powerful as painting
—perhaps even more so, because they depicted real events—was a revelation. It was an easy transition.

His first influences were Western photographers, but eventually he came across Alex Baluyut’s books “Kasama” and “Brotherhood,” photo documentaries of the New People’s Army and Manila policemen made in the 1980s and 1990s that included graphic photographs of extrajudicial killings, and realized that we had our own tradition of documentary photography—one that looked unflinchingly at death and violence and its consequences.

“I hope people become more aware that there are different kinds of photography,” he says. “I like the idea of documentary photography, but I also like creating an installation that’s photography-based. There are so many possibilities in the Philippines that have not yet been tapped.”

Although his documentary on the drug war and its effects continues, he is already looking deeper into the story.

“I don’t want it to be only about the drug war,” he says. “I think there’s a bigger picture. I’m still trying to understand what’s happening. There are moments when you think you’ve figured it out, and then it slaps you in the face: you still don’t get it. In a way, I started shooting out of curiosity, the urge to understand. That’s what I’m still doing.”