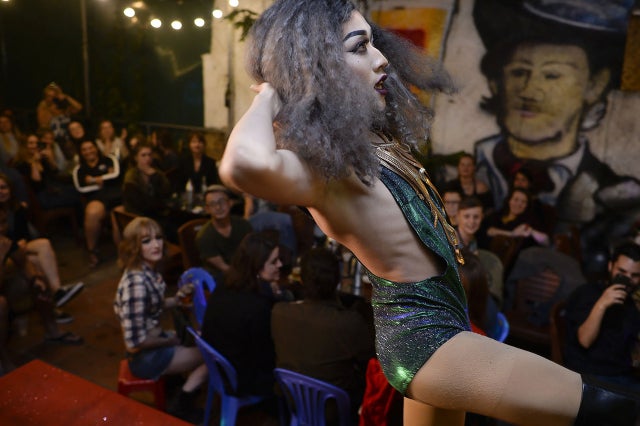 This boy is on fire: Vietnam drag queens electrify Hanoi

Makeup artist by day, cross-dresser by night, Betty is among a vanguard of Vietnamese drag queens shaking up Hanoi’s nightlife — and social norms — in a city where such performances remain little known.

In a lime green barely-there mesh dress and towering silver heels, the 22-year-old hopes to bring drag into the mainstream with regular performances in Hanoi, a conservative capital better known for its colonial charm than men in sequined minis.

“If we dare to be pioneers, soon this art will be accepted in Vietnam,” Betty told AFP before a show Saturday that stirred up crowds with renditions of hits by Whitney Houston and Alicia Keys.

The drag night started as a weekly viewing party for the hit TV series “RuPaul’s Drag Race” and quickly transformed into a show of its own — drawing a handful of men in drag to the stage for punchy lip-sync performances.

Organizer Tamah Lake said it’s the only event of its kind in Hanoi.

“It’s brought it more into the open… I think it’s becoming slightly more mainstream and slightly more well-known,” said Lake, not herself a drag queen, who works as a teacher during the week.

The drag queens who turn out for her Saturday night parties say they have few places to perform in a city where cross-dressing is almost unheard of, unlike in the West where starlets like RuPaul — the drag queen mother — have helped to popularize it.

“In Vietnam there are drag queens that have been active for a long time but have not been acknowledged. This show helps more people know about our art,” said Betty, who started the five-member drag group “Victeam” in Haiphong, east of Hanoi.

Communist Vietnam is seen as relatively progressive on LGBT issues — the one-party state decriminalized gay marriage celebrations in 2015, although it stopped short of full legal recognition for same-sex unions — and the government is currently drafting a transgender law to allow legal gender changes.

But cross-dressing can help to boost tolerance, according to Vuong Kha Phong, LGBT rights program officer at Vietnamese NGO iSEE.

“Drag queens being out there performing helps tremendously in getting people to know and be more comfortable with diversity,” Vuong told AFP.

Though the drag scene is still just emerging in much of Vietnam, cross-dressing has historic roots: the centuries-old ritual of “Hau Dong” requires mediums to dress as the opposite sex to channel spirits.

Still, when it comes to modern cross-dressing, some drag queens face pushback from the community for blurring gender norms.

“Hanoi is really traditional, they don’t hate (drag) but they don’t approve of it at the same time,” the 25-year-old told AFP, after debuting in a Gatsby-inspired sequined look.