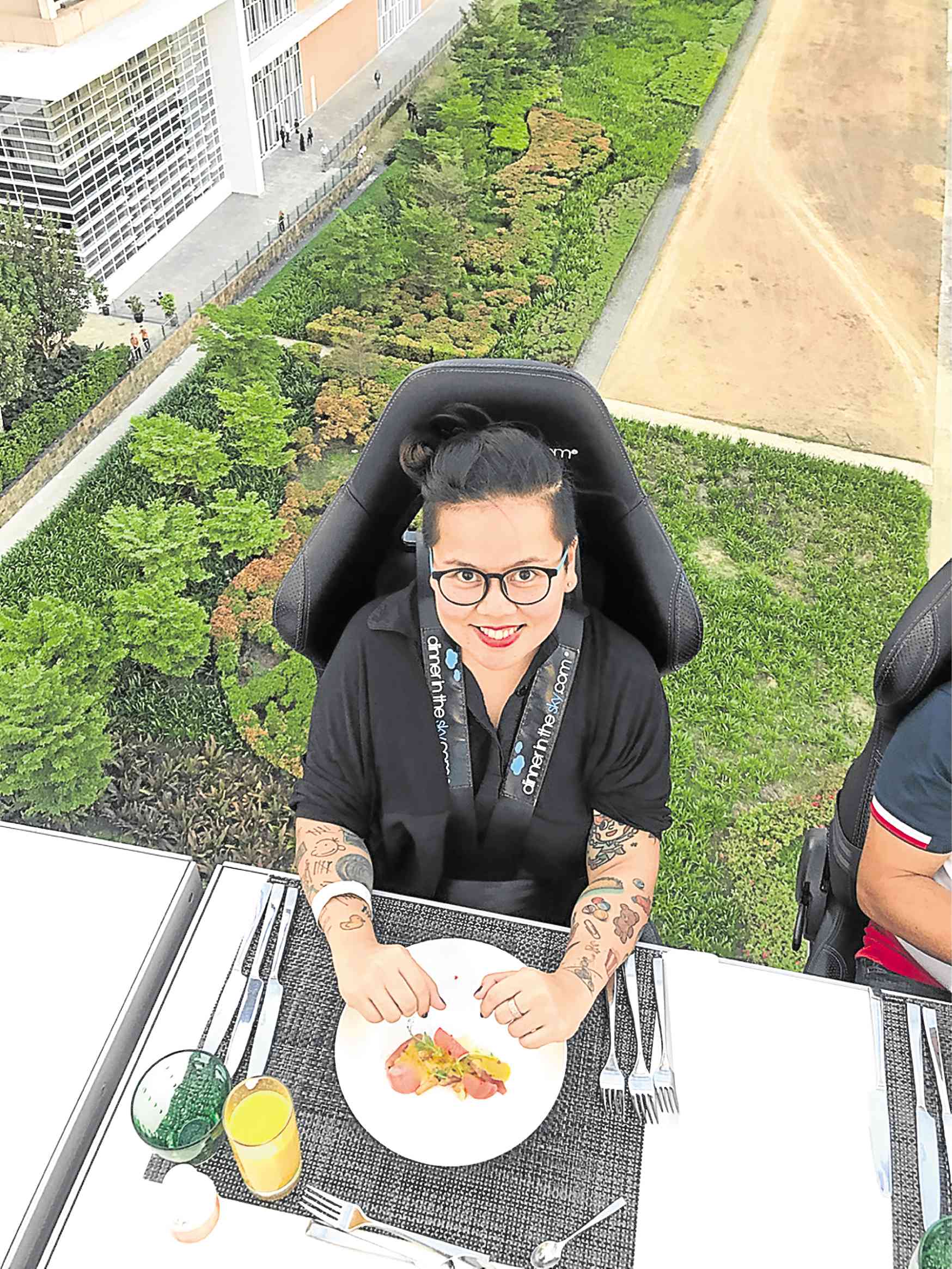 The author getting high with Dinner in the Sky

My biggest fear was accidentally dropping a fork. Fine, I was a little nervous about the height, too. After all, it isn’t every day that one dines 150 feet up in the air.

But, as I stared at the crane that would lift our 22-seat table, I had a more pressing concern: I needed to pee, fast.

I headed inside Solaire Resort and Casino for my bathroom break. Tip number one: Hit the restroom before you fly. There will be no peeing in the sky.

Here’s what happens when you check into the VIP Lounge for Dinner in the Sky.

You sign a waiver, you get a wristband and you wait to board. (If you booked a business class or first-class seat, you get champagne and wine while waiting.)

Tip number two: Don’t be late. You don’t want to be left behind.

We filed toward Solaire’s Esplanade, official food and venue partner, and stopped by the tent to leave our stuff in the lockers.

Tip number three: Just bring what is necessary—in my case, my phone, my camera, and three little Fuchiko dolls.

One by one, we were called to our seats. A safety officer strapped me in, at one point asking me to lift my arms so he could secure the six-point seatbelt.

Stefan Kerkhofs, who put up Dinner in the Sky with partner David Ghysels 12 years ago in Belgium, welcomed us with great energy. He served as host and DJ at dinner.

Chef for the evening was Hylton Le Roux, who runs Waterside at Solaire. Cooks Patricia Jimena and Kevin Patricio were assisting him. Patricia reassured us, “I have a fear of heights but this is really not scary.”

We started digging in before the crane started hoisting us up. Terrified of roller coasters (“I don’t have fear of heights, I have fear of movement,” I like telling people), I was dreading that moment.

But MMI Live CEO Rhiza Pascua, who brought Dinner in the Sky to Manila with husband Angelo, assured us that we wouldn’t feel the platform going up. She was right. It was such a smooth ride that I didn’t realize we were already up in the air. I didn’t feel dizzy at all.

The tuna taradito was delightfully spicy. I washed it down with the mango juice that came with the meal.

La Roux explained each course being served. The second course was anticuchos de pollo with tamarind habanero glaze, mojo verde, baby beetroot and crispy cancha corn.
“Anticucho is almost like pork barbecue, meat on a stick. Classically, when they make anticucho in Peru, they use pork, but I decided not to. I know, right, sayang?” La Roux said, his surprising use of Filipino making everyone laugh. “Instead, we used chicken.”

The chicken anticucho was juicy and flavorful. I swirled each piece in the mojo verde sauce before popping it into my mouth.

The food was great, but there were times I was torn between eating and taking pictures. “I keep forgetting to eat,” said the guy beside me.

Kerkhofs and the chefs also played photographers, offering to take multiple snapshots of guests with the incredible backdrop.

Another tip: Take all the photos you want, but post on social media later. You have all the time in the world to post, but have only one hour to enjoy Dinner in the Sky. Relish the experience as much as you can.

There are two dinners each day, and I was part of the first batch which started at 5:30 p.m. I thought it was perfect because we got to see the sunset from our table in the sky, and then enjoy the city lights afterwards.

I swiveled my chair, letting my feet dangle in the air. Even looking down, I felt no nervousness. That was how comfortable, safe and secure my seat felt.

“You can recline, you know,” Kerkhofs said. I tried. But because my seatbelt was so secure (a really good thing!), I could recline only a few inches.

It was a joy to watch the chefs busy in their little kitchen in front of us. It was surreal, too. I kept thinking, is this really happening? Are people really preparing a meal for me 50 meters off the ground?

I picked the pork and really enjoyed it. It was tender, and the symphony of flavors—sweet, salty, spicy—sang on my palate.

It was a little windy and the platform moved with the breeze—again, not in a dizzying way. I don’t know how they did it, but the machinery was designed so well that I felt as secure as I would on solid ground.

At this point, the sun had set and the city lights sparkled. It was a magnificent view.

What followed was a medley of ’70s disco hits including “Le Freak.” This dinner was starting to feel more like a party in the sky.

For dessert, La Roux said, “We give all the ingredients for your own dessert and you can plate it. I will go around and look which one’s the best, and the winner will get a high five…”

Everyone got into it—plating the best-looking dessert possible. I thought it was brilliant. At that point, whatever nervousness anyone had had worn off. We were having fun playing with our food. And dessert was delicious, too.

I was still stuffing my face with the cheesecake when the crane started lowering the platform. Again, I didn’t even feel it. And when we were getting closer to the ground, I felt sad. “Not yet!” I wanted to shout. But my mouth was too full of chocolate.

We applauded the chefs for a great dinner.

On our way out, we ran into people who were about to begin their dinner. “How was it?” they kept asking.

The tickets aren’t cheap, but they’re worth the price. I might just do it again. Maybe with a different chef.

I got high with Dinner in the Sky. And I didn’t even drop a fork.