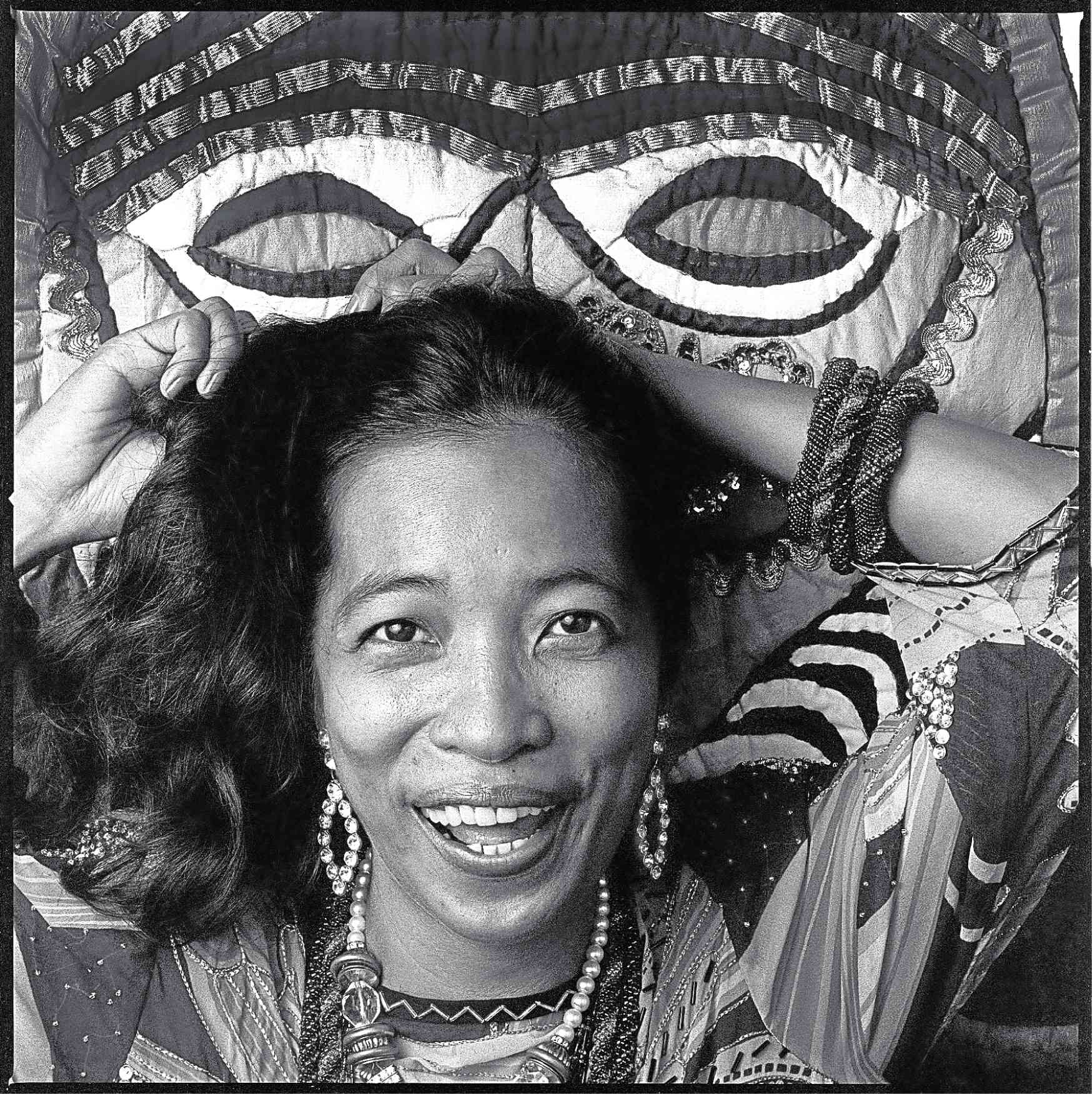 Pio Abad on Pacita Abad: ‘A Million Things to Say’

Fourteen years after her death, Pacita Abad still has a million things to say.

Her trapunto canvases —some towering over 10 feet—exude a palpable energy. Bright swathes of color explode from the quilted and padded surface (trapunto is Italian for “quilt”), reinforced with light reflected off beads, sequins, embroidery, printed fabrics, shells and other materials embedded in the paint.

They speak with a remarkable directness of expression.

Einstein spoke of “the mysterious” as the source of all true art and science. As someone who roamed the earth with both eyes and mind open, Abad certainly managed to channel some of this mystery through her art.

Her nomadic lifestyle gave her a wealth of material to draw inspiration from: African and Melanesian tribal art, the diversity of natural life, the collision of ancient and modern in the developing world.

Her flamboyant personality, psychedelic palette, and the fact that she was an Asian artist working from a global perspective, earned her the tag “woman of color”—a stereotype she never quite managed to shake off.

“She was much more complicated than that,” says her nephew, artist Pio Abad. “We wanted to embrace that multiplicity of who she was and what she painted.”

Himself an emerging voice in the vibrant London contemporary art scene, where his multimedia works have garnered critical praise, the younger Abad co-curates “Pacita Abad: A Million Things to Say” (with Joselina Cruz), an exhibit of selected trapunto paintings from the late artist’s 30-year career. It opens April 12 at the Museum of Contemporary Art and Design (MCAD), College of Saint Benilde, Manila.

“This is not a retrospective, it’s a reintroduction,” he hastens to add.

Abad’s early death in 2004 has certainly left a void in the Philippine art scene.

Had she lived, she would probably be as influential as her contemporaries Agnes Arellano, Julie Lluch and Virgilio Aviado. As it is, two or three generations of young Filipino artists have matured without being aware of her work.

Furthermore, Abad is one artist whose work has to be experienced in real life to be fully appreciated. Digital reproductions just don’t do them justice.

“A Million Things to Say” is the first step toward addressing this absence.

With its double-height ceilings and bone-white interiors, the cavernous main gallery of MCAD is the ideal venue to showcase the works.

“The existing documentation of her work doesn’t give you that sense of breathtaking scale when you encounter it,” Pio says.

“Also, you don’t get the sense that they’re not just paintings—they’re objects. They’re not flat, they’re multidimensional.”

In the gallery, the trapuntos are hung like tapestries, the better to see the the amount of painstaking work that went into them, which can be seen from the back.

“The rigor and precision involved in constructing the trapuntos is pretty phenomenal,” he says.
“It’s mind-blowing, the amount of attention to detail. I remember her studio and it was always busy. She would work on several pieces at the same time, but I never saw her working from studies. It was always straight to the canvas. The construction was intuitive, but it was also precise, and that’s one thing we wanted to emphasize with this show: Pacita was precise. How the work was constructed was just as important as how good she was with color and with scale.”

Abad was also incredibly prolific, and organized. She was working until the last, her final exhibit at the Cultural Center of the Philippines opened just two months before her death, and she left nearly 5,000 artworks, now part of the Pacita Abad Estate managed by her husband, Jack Garrity, much of it in storage in the United States.

“These works are incredibly contemporary when you think that they were made 30 years ago,” Pio says. “How do you begin reading her work, not as something from the past, but something that’s addressing issues that are relevant now? Part of the reason for this exhibition is to present her as a contemporary artist. She was way, way ahead of her time.”

Pacita Abad was born in 1946 in Basco, Batanes.

“The family legend is that she was born in the Basco post office,” Pio recounts.

Both her parents were members of Congress, her father a cabinet secretary as well, and Pacita was groomed to follow in their footsteps.

“She was going to be the politician in the family,” says Pio, whose father, former Budget Secretary Butch Abad, is Pacita’s younger brother.

To this end she studied political science at the University of the Philippines (UP) Diliman, where she was drawn to the nascent student activist movement of the mid-’60s. Her rebelliousness led her parents to send her to San Francisco to study law, beyond Marcos’ reach.

There, at the cusp of the 1970s, Abad was drawn to the Haight-Ashbury counter-culture. It is not known if she partook of the peculiar Kool-Aid that is said to have been served there at the time, a possible explanation for her later sensitivity to the mood-altering properties of color.
In any case, she met and married George Kleiman, a painter, who introduced her to the San Francisco art scene.

Pacita’s relationship with the artist didn’t last, but her fascination with art did.

She then met and later married a law student named Jack Garrity, and in 1973, they undertook an epic, yearlong journey that saw them hitch-hiking from Turkey to the Philippines. The trip took them through Iran, Afghanistan, Pakistan, India, Sri Lanka, Myanmar, Thailand, Laos, Taiwan and Hong Kong.

By the time Pacita made her way back to the US, she had forgotten about law and decided she would be an artist. She began formal art studies at the Corcoran School of Art and had her first exhibit in 1976.

She also began a lifelong nomadic existence, abetted by her husband’s development work in the World Bank, that saw her living and working in New York, Bangladesh, the Sudan, Thailand, Boston, the Dominican Republic, Indonesia and Papua New Guinea.

As she roamed the planet, her art evolved from early, figurative works on social themes, to paintings influenced by the tribal masks she collected, to stylized nature scenes, finally moving toward abstraction with pure form and color.

She developed the trapunto technique for which she became known.

“I think global, not racial,” she once said. “I go out, learn the wider horizon, develop and evolve.”

Considering how much time she spent living, working and exhibiting abroad, she somehow managed to keep a high profile in the Philippines, where her larger-than-life persona attracted as much attention as her work. She once showed up for the opening of an exhibit of her underwater paintings in full scuba gear.

But numerous grants and residencies, and her own wanderlust, kept her on the road. Not even a diagnosis of lung cancer in 2001 could keep her from traveling, and working. If anything, she became even more prolific.

The titular piece of the exhibit, finished two years before her death, is one of her most abstract statements: it seems to represent the Void and enlightenment as essentially the same state.

“Pacita is really hard to locate because she traveled for so much of her life,” Pio says. “I think that element of occupying the globe at such a breathtaking pace kind of dictated the choices she made. As much as she was a Filipino artist, she was constantly looking outside the Philippines for relationships between the local and the global. ”

She was also very conscious of her Ivatan heritage, and one could speculate that growing up in the relative isolation of Batanes nurtured her need to see as much of the greater world as she could, in order to feed her muse. (Fundacion Pacita Abad, now a top tourist destination in Batanes, was named after her by the family.)

“I wouldn’t draw direct parallels between her work and what I do,” says Pio, whose own work is decidedly more post-modern than his aunt’s.

“She’s a painter, and I don’t paint. She was always a presence in my life, this larger-than-life artist, but in the end I follow my own ideas. The best present she gave me was making me move to a city I had no context in. I hadn’t even heard of Glasgow, but it was my San Francisco. I was there for five years, and it was there I realized that you could become an artist and commit to it full-time.”