Behold the OASIS and the battle to save it.

Sometimes there are movie projects that just seem to be the product of destiny. Steven Spielberg has long been an auteur of wonder, reshaping pop culture with memorable movies such as 1975’s “Jaws” and 1993’s “Jurassic Park.” It could be argued that the director has developed a habit of shaping his own worlds.

Thus it’s only right that he should be the one to bring Ernest Cline’s 2001 iconic sci-fi novel “Ready Player One” to the screen; in effect, Spielberg would be building a world about building worlds.

It is 2045, and the world population spends most of their time in a virtual reality platform known as the OASIS. When the OASIS creator James Halliday (Mark Rylance) dies, he leaves behind a challenge: Whoever can solve three puzzles and find the Easter egg will gain not only half a trillion dollars, but complete control over the OASIS. “Ready Player One” focuses on the efforts of teenager Wade Watts (Tye Sheridan)—known in the OASIS by the name of his avatar Parzival—to find the Easter egg along with his comrades Aech (Lena Waithe), Daito (Win Morisaki), Sho (Philip Zhao) and Art3mis (Olivia Cooke), collectively known as the High Five. 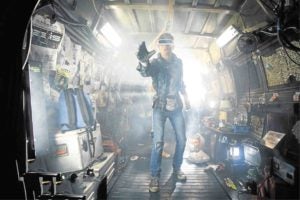 The High Five is threatened by the ruthless conglomerate IOI, led by boss Nolan Sorrento (Ben Mendelsohn) and his right hand, F’Nale (Hannah John-Kamen). IOI’s operatives, known as the Sixers, are deployed to gain the Easter egg for IOI to gain dominance over the OASIS.

To be able to make this movie, Spielberg has made wholesale changes to the material. In fact, the sheer number of changes can be overwhelming. “Ready Player One” follows the broad strokes of the original novel, but has changed almost everything inside. There are new plotlines including one about the online resistance to IOI and the movie’s very Spielbergian final act is almost completely different from that in the book.

In particular, Spielberg and screenwriter Zak Penn have revised the material to make it more accessible to the everyman viewer. The most obvious change is the addition of the big car chase sequence near the beginning. These changes, while noticeable, work, making the movie far more effective, though it does diverge from the excellent novel. Spielberg has also put in more happenings involving the real world instead of the OASIS. Along the way, “Ready Player One” employs commentary on everything from internet commerce to the addiction of escapism. The film shimmers with Spielberg’s distinctive wonder and power.

But the film also never forgets the central element of the novel: the geeks have inherited the world. The novel flew its geek flag proudly, and the film flies that flag right at the audience. While the novel’s biggest influence was clearly Dungeons & Dragons, the film’s biggest influence is video-gaming. The novel had a more retro futurism, reaching toward the 1980s, while the film leans more toward the 1990s.

All of it is irresistible.

Bigger on the inside

Whether novel or movie, “Ready Player One” is like Doctor Who’s TARDIS: It’s bigger on the inside. A big part of what made the novel so successful was the sheer amount of pop culture geekiness Cline had equipped it with. The main narrative contains all kinds of references to the 1980s (films, toys, music) because Halliday’s quest was built around that era. This gets boosted big time in the OASIS, because you basically could become whatever or whoever you wanted to be. As Wade says: “People come to the OASIS for all the things they can do. But they stay because of all the things they can be.”

This thus becomes the best part of the movie. There’s no need to imagine it: Spielberg and company put it on the screen. We can spend an entire article just talking about the Easter Eggs: “Akira,” Batman, “Child’s Play,” Dungeons & Dragons, Gundam, HALO, Hello Kitty, “Iron Giant,” “Jurassic Park,” “King Kong,” Monty Python, “Mortal Kombat,” “Robocop,” “Star Trek,” “ Star Wars,” “Teenage Mutant Ninja Turtles,” among many others. That’s why Spielberg really is the perfect person to bring “Ready Player One” to the screen. Aside from now working in a time where the CGI is now capable of doing anything he wants to do, Spielberg gets it, and works hard to make sure everyone watching gets it, too.

Here’s a bit of the future: Once it’s released away from the cinema, “Ready Player One” will become the most rewound, paused and zoomed-in movie of all time as viewers will explore every scene in it for pop-culture references. It’s a geek film about geekiness—a celebration of pop culture by both Ernest Cline and Steven Spielberg—making “Ready Player One” the ultimate geek cinematic experience.

Warner Bros.’ “Ready Player One” is now showing in cinemas.