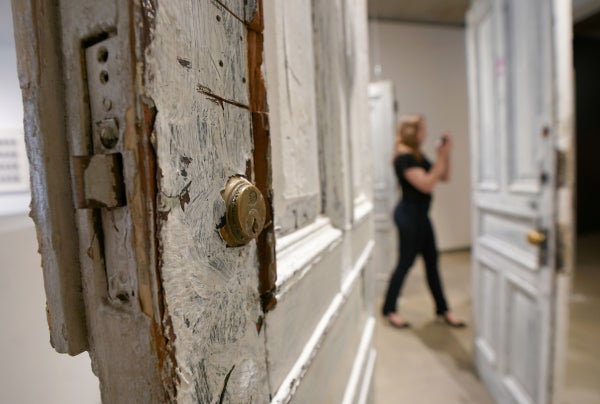 More than 50 doors from New York’s fabled Chelsea Hotel that guarded the secrets of stars such as Janis Joplin, Leonard Cohen and Jimi Hendrix are going on sale, thanks to an enterprising former homeless man.

The unusual auction comes after the historic bohemian hangout closed in 2011 for extensive renovations, which will leave only the original facade of the 12-story hotel on 23rd Street.

Since opening in 1884, the Chelsea Hotel became a refuge for writers and artists who would stay days, weeks or indefinitely. Among them were Mark Twain, Jack Kerouac, Bob Marley, Humphrey Bogart, Joni Mitchell, Madonna and Andy Warhol.

Cohen immortalized the building in his song “Chelsea Hotel No. 2,” later revealed to be about a fling with Joplin, while the hotel gained notoriety when punk rocker Sid Vicious was charged with stabbing to death his girlfriend Nancy Spungen there.

Entering the story is a lesser-known resident, Jim Georgiou, who lived at the Chelsea Hotel from 2002 to 2011 when he was evicted for failing to pay rent. He moved nearly across the street from the hotel with his dog Teddy and tried to make a living by selling records.

In 2012, Georgiou spotted workers preparing to throw out old doors and managed to recover more than 50 of them with help from friends, said Arlan Ettinger, the president of auction house Guernsey’s, which will sell the mementos on Thursday.

‘Great significance,’ at least for finder

“When you’re homeless, a door takes a great meaning, a great significance. It’s a portal to a home that a homeless person doesn’t have,” Ettinger told AFP.

Georgiou started to visit a nearby library and spent hundreds of hours trying to connect the Chelsea Hotel doors with their residents.

Number 105, for example, was the home of Edie Sedgwick, the model and muse of Warhol, who filmed some of his “Chelsea Girls” experimental film in the room.

In total, Georgiou identified 22 of the doors for association with famous residents.

He approached Guernsey’s last year after unsuccessfully proposing the door sale to other auction houses.

Georgiou no longer lives on the street as friends have provided him accommodation.

But even though he has little money, he will donate half of the proceeds from the auction to City Harvest, which distributes uneaten food from New York restaurants and markets to people in need.

Ettinger said he was unsure how much the auction would generate.

“They are old, beat-up doors that don’t look very pretty but have incredible significance. It’s hard to estimate their value,” Ettinger said.

“I’ve been running Guernsey’s for 43 years and I’ve never heard of something like this.”

For now, the doors are on display at the Ricco/Maresca Gallery in the neighborhood.

“Each door will take a significant number of ghosts with them,” gallery owner Frank Maresca said. MKH