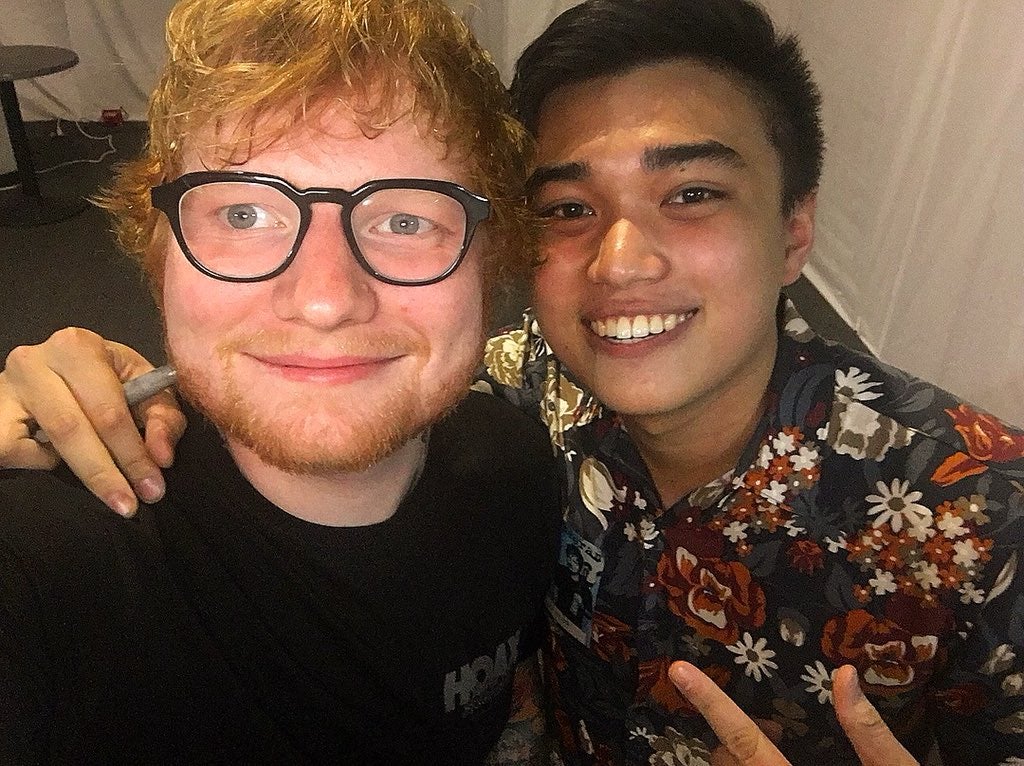 “Never meet your heroes,” so goes the saying; wisdom deems that knowing one’s idols could only lead to disappointment. Even American musician Moby has vowed to never meet his musical inspirations because it could mean love lost over his favorite songs.

Fortunately, this wasn’t the case for Joaquin Madamba (@madmadamba), 20, a college student and aspiring musician. His posts on Twitter narrating his experience of meeting Ed Sheeran have gone viral, with over 40,000 favorites each as of writing.

He recounted the once-in-a-lifetime meeting with Ed Sheeran in an exclusive interview with INQUIRER.net. Sheeran performed in Manila for a second time in the country last April 8, this time for his “Divide” tour.

But the meet-and-greet almost didn’t happen, and in fact, Madamba ended up being the last person Sheeran met before making show preparations.

At first, it seemed luck was on his side when friend and YouTube artist Lesha Litonjua won a ticket to meet the artist. She encouraged Madamba to reach out to Warner Music Philippines for an extra pass — he was able to make connections to the company after he hosted and performed at a “Divide” album release party.

Warner Philippines granted him the pass, but there was a misunderstanding when he entered the concert grounds, him thinking he had to claim it there. It turned out that the meet-up point was in front of the Patron A area; if Madamba left the concert grounds, he would not be allowed back in as it was security policy.

“I was left with only two choices: it was either meet Ed only or watch the concert only,” he explains.

Even when he approached concert organizers Ovation Productions, he was told “there was nothing they could do about it.”

The tension and drama turned out to be worth it when he finally met the ginger pop singer. He was able to share his music experience with Sheeran, among other topics in just six minutes. “It sounds short but we were able to talk about a lot of things,” recalls Madamba.

“Ed was a pretty casual guy. He’s just like you and me… only with very tight security,” Madamba describes, adding that Sheeran would even extend time with fans despite the security team’s reminders.

“I can tell that Ed’s kindness and warmness [are] very genuine. He’s such a nice guy that when I asked if we could take a selfie, he even took my phone and offered to take the photo for us,” he says.

Sheeran even agreed to imitating a gangster pose for a photo taken before Madamba exited.

He told Sheeran of friends who “wanted him to know that they exist,” and even shared his love life which he credits to the musician.

“I made sure he knew that [my girlfriend Alison and I] became best friends because of his songs and that she has promised herself that she’d watch Ed with the person she loved,” he says.

Inspired by Sheeran, Madamba loops his music live; the technique involves recording layers of music real-time, and allows solo artists like Sheeran to go on tour without a band and make — and play — musical arrangements as a one-man show.

He presented him his looping cover of “Tenerife Sea” which he performed during the “Divide” album release party.

Madamba says it’s his favorite song because of speculations that it’s about Taylor Swift — of whom he’s also a fan — and because it was the first song he made special arrangements with through looping.

“He told me about how I added a nice melodic riff to my version and how he hasn’t played the song in a while,” recalls Madamba of the bonding moment. “He even mumbled to himself ‘I wonder if I should sing this tonight.’ To my surprise, he actually sang the song hours later.”

The song is rare in the Sheeran tour; Madamba says it’s only been performed 27 times out of the almost 136 “Divide” shows.

And hopefully, Sheeran will be listening to Madamba’s music, as he gave the star a flash drive “of a song I wrote that was inspired by him.”

Next on Madamba’s list is Bruno Mars: “He’s also one of my biggest inspiration being an all-around Filipino musician and performer.” JB

Kendra Kramer Interviewed Ed Sheeran and the Photos Are Too Cute