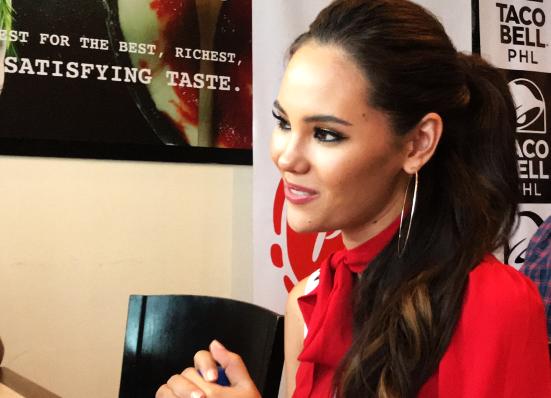 Miss Universe Philippines Catriona Gray believes that a new generation of empowered women can bring beauty pageants in the country to a new level.

Speaking to the media on Wednesday, Gray said that beauty queens were not merely girls “who put on our make up and strut on stage and that’s the end of everything.”

The model-singer from Albay acknowledged the necessity of being beautiful. But she said Filipino beauty queens could take the contest to another level.

“We are empowered women who follow an advocacy. We bring our passions to the table. We show our skills and what we care about,” she said. “It’s the rules set out by our arena, we’re beauty athletes, but it’s up to us to take it further, and that is a challenge that I think Filipino beauty queens are really risen to.”

According to Gray, a former Miss World Philippines, women today have more to offer, such as being advocates on socially relevant issues as well as voices in conversations that matter.

“We can really be beauty queens and set new standards to show that we are a new generation, that we really care about our country, that we care about what’s happening. We want to be voices to participate in the conversation that we should be having,” she said.

“We are people with stories,” she added. “We’re women who want to excel in our fields, and we want to give back. That’s the rules laid out by pageantry (to be beautiful), but at least I am very proud to say that we’re a generation that’s bringing it further than that.”

Gray said she would want to represent the Philippines “the best that I can” at the Miss Universe pageant stage.

“We deserve nothing less,” she said. “To have the expectation and level of excellence in beauty pageants being raised and raised every single year, I feel like i need to rise to that occasion.”

As Miss World Philippines 2016, the Australian-Filipino model-singer landed in the Top 5. She won Best in Swimsuit, Best in Evening Gown, Best in Fasion Runway and Best in Talent awards. /atm