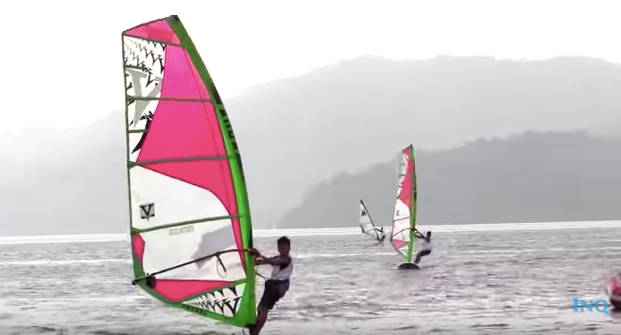 Anilao: Windsurfing, dolphins, and a 101 on marine conservation

The manic algorithm of city life seems like an alien concept when in Anilao: absent are the routine of a nine-to-six work schedule, the ennui of being hooked to the internet 24/7, and the frenzy of the daily commute that constantly pervades those who live in the metro. For someone who’s used to the frantic nature of the city, staying in a beach may seem like an ostensibly difficult thing to do, as its charm shows in the most rudimentary manifestations: the lack of an internet connection, a quiet sunrise, fresh air, and silences interrupted only by the momentary sounds of the crashing waves and the call of the bukayo peddler.

Anilao is situated in the coastal municipality of Mabini, Batangas — merely two hours and a half away from Manila if without traffic — and a top spot for windsurfing and diving aficionados. It’s a getaway spot most suitable for those who do not wish to drive hours and hours on the road, its close proximity to the city allowing one to have a go at repose without being weary from the journey.

In the morning of April 7, windsurfing masters and enthusiasts started to gather in the courtyard of Janao Bay Inn with their boards and sails to prepare for the annual Anilao Windsurf Regatta. The event sees a multitude in attendance every year, from professionals who represent the country in the RS:One windsurfing world championships, to kids just starting out, and teenagers and women who’ve discovered a profound love for the water sport.

Half an hour past nine, the windsurfers of the RS:One national team kicked off the races, later followed by the Novice division, then Classes A, B, C, Open, and Masters. Windsurfers glided and weaved on water in a slalom course — an undertaking that looks effortlessly easy from afar, but in reality takes years and years of practice and training.

It is a cross between surfing and sailing, a sport that subjects one to the uncertain mercies of the waters and wind. The learning curve has never been so real, and students are tested beyond their patience, with beginners made to start out on big boards and smaller sails in learning the basics before eventually progressing to larger sails and riding waves in high-wind.

Meanwhile, back in Janao Bay Inn, children have been gathered in one table, putting brushes to pigments as attempts to fill in drawings of manifold fishes and other aquatic creatures. This EcoCamp activity was headed by Joal Escalon, executive director of the Sea Institute. It is a non-profit organization that promotes marine conservation in the Verde Island Passage, converging together the grassroots movement and the academe here and abroad to create a community of marine patrol teams and “citizen scientists”.

The Verde Island Passage is a channel that cuts through the Philippines at the bottom of Luzon, surrounded by the provinces of Batangas, Marinduque, Mindoro Occidental, Mindoro Oriental and Romblon. It is known as “the world’s center of the center of marine shorefish biodiversity,” with scientists from the California Academy of Sciences discovering new species every year in its expeditions to Batangas.

“We start with the kids. We also [reach out] to local schools and communities on how to monitor their corals so they can see the impact over time,” Escalon shared. “We have camps that offer two-day, four-day marine science camps, eco camps, every summer. It’s all run by volunteers.”

Apart from painting different marine animals, Escalon also prepared a sculpting activity where kids molded clay into different types of corals, as well as a clean-up drive around the shores of the beach where they were made to collect trash and segregate them in bags.

“I especially enjoy working with kids,” Escalon added. “Because with kids we do the camps and activities, games, snorkeling. When you see them pick up an attitude or a behavior and it changes them, it’s totally priceless. It’s rewarding.”

The day seemed to pass by quickly, as the first day of the races soon reached its end around 4 p.m. Dinner commenced at 7 p.m. in the courtyard of Janao, a feast that involved the obligatory Filipino rice-and-pancit combo, lumpia, adobo, buko pandan and, oddly, kimchi.

Children played “Bang, Sak!” in the dark of night, while the rest ate under palm trees and a splattering of stars. Sooner than later, the children’s cries faded into the yawning void and were replaced by a musical duo, “Dindo and Ryan”, who serenaded the adult guests until the late hours of the night.

A pod of dolphins

The early rise the next day saw another round of races from all divisions. But more than this, it was the unexpected arrival of a small group of wild dolphins that stole the regatta’s thunder, leaping and wading through windsurfers and boaters and paddlers in a sine wave path. While the wild dolphins left just as fast as they came, their presence caused quite a stir among the guests, who seemingly forgot it was a windsurfing regatta event and not a dolphin watching that was taking place.

Meanwhile, the latter part of the day proved to be slow, as the wind refused to come and the windsurfers had to stall the last of their races until the breeze decided to come back again after hours later. At 5 p.m., however, all the races had been finished, and the organizers rounded up all the participants and guests back to the courtyard one last time for the awarding.

A sport in dire need of women

It didn’t take long until all the trophies have been handed, and the victors had their photo ops in the makeshift platform that the Anilao Windsurf Regatta had once again finally come to a close. But while the event was a success, Anna Marco, the head organizer of the Anilao Windsurf Regatta, admitted that the windsurfing community still has a long way to go, especially when it comes to getting more participants — specifically women — to join in.

Coach Raul Lazo, head coach of the Philippine Windsurfing Team, attested to the scarcity of female windsurfers, saying, “What we want is more participants, more people getting involved into the sport, more females getting into the sport because it’s very difficult to get females in windsurfing. We’re pushing it, but it’s still an obstacle and a challenge for us.”

Meanwhile, Marco also shared that they are able to see the potential of windsurfing in the country through the diverse participants they attract, with this year’s annual windsurfing regatta drawing international friends from Korea and Malaysia to join in on the races. The growing interest of young children in the water sport, too, proves to be promising, as Marco believes they are the future of windsurfing.

“With events like this we see that there is a future in windsurfing in the Philippines,” said Marco. “The kids, they are the future, and we see them grow from windsurfing as kids then they go to teens then they go to adults. Then we just have to keep encouraging them and supporting them to stay in the sport.”

Today, windsurfing is still not as mainstream and popular as basketball and volleyball, with its promising community choosing to swim upstream rather than follow the current. It is a sport that comes with a worthy pursuit and a great responsibility — a sport not just concerned with scoring points, as it focuses more on how one plays rather than winning or losing. It is a sport, too, that sees its constituents not just as mere windsurfers, but as agents who make it their personal oath to conserve and protect Philippine marine life and waters — the very same vibrant waters they call their playground and second home whenever out at sea.

The video on Anilao and the windsurf regatta may be viewed below. JB