Alcohol guidelines in many countries may not be safe, suggests study | Lifestyle.INQ ❮ ❯ 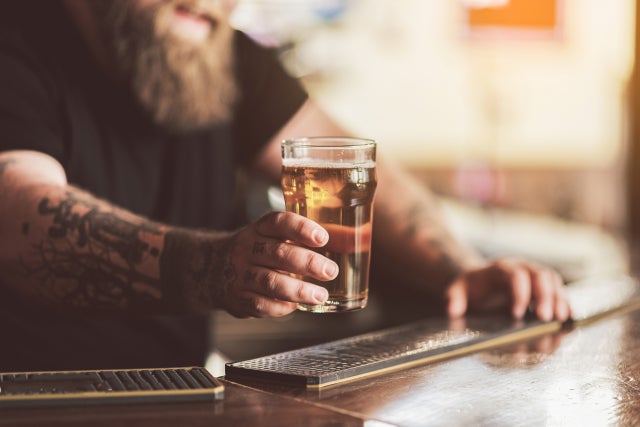 Drinking the equivalent of 100-200g of pure alcohol a week shortened life expectancy by about six months compared to drinking less than 100g, founed the study. Image: IStock.com/YakobchukOlena via AFP

Alcohol guidelines in many countries may not be safe, suggests study

Recommended limits for safe alcohol consumption are too high in many developed countries and should be lowered to save lives, a study suggested Friday.

Regularly drinking more than 100 grams (3.5 ounces) of alcohol per week — about five or six medium glasses of wine or pints of beer — was linked to a shorter life expectancy for men and women, according to research published in The Lancet medical journal.

“Recommended limits in Italy, Portugal, and Spain are almost 50 percent higher than this, and in the USA, the upper limit for men is nearly double,” the researchers found.

The international team analyzed data on nearly 600,000 drinkers aged 30-100, from 83 studies in 19 high-income countries. The participants had been observed for at least a year after signing up.

The researchers factored in other health-related data such as the participants’ age, gender, diabetes history, their socio-economic status, and whether they smoked.

Among the group, the team recorded 40, 310 deaths, and compared this with the participants’ self-reported levels of alcohol intake.

Drinking the equivalent of 100-200g of pure alcohol a week shortened life expectancy by about six months compared to drinking less than 100g, they found.

Consuming between 200-350g per week lowered life expectancy by one to two years, and more than 350g by up to five years.

“This study has shown that drinking alcohol at levels which were previously believed to be safe is actually linked with lower life expectancy and several adverse health outcomes,” said study co-author Dan Blazer of Duke University in North Carolina.

On average, each unit of alcohol consumed over the 100g threshold, slices about 15 minutes off a person’s life — about the same as a cigarette, David Spiegelhalter, a professor in the “understanding of risk” at the University of Cambridge said in a comment on the report.

“Of course it’s up to individuals whether they think this is worthwhile,” he said via the Science Media Centre in London.

In the United States, for example, the recommended cutoff for men is 196g or 11 glasses of wine per week, and for women 98 grams.

Limits in Italy, Portugal and Spain are about 50 percent higher than in Britain, where the threshold for safe drinking was recently lowered to 112g.

“These data support adoption of lower limits of alcohol consumption than are recommended in most current guidelines,” the report added.

The team found no evidence supporting a lower alcohol limit for women than for men.

Commenting on the report, Petra Meier, a professor of public health at the University of Sheffield in Britain, urged caution in interpreting the results.

“Guideline developers tend to recognize that, in line with many other voluntary behaviors, drinkers are likely to be willing to accept some level of risk and have set guideline thresholds accordingly,” she said.

The researchers found that the more alcohol a person consumed, the higher their risk of stroke and heart failure.

By contrast, alcohol consumption was associated with a somewhat lower risk of non-fatal heart attacks, they said — echoing previous research.

However, “this must be balanced against the higher risk associated with other serious — and potentially fatal — cardiovascular diseases,” said lead author Angela Wood from the University of Cambridge in Britain. CC