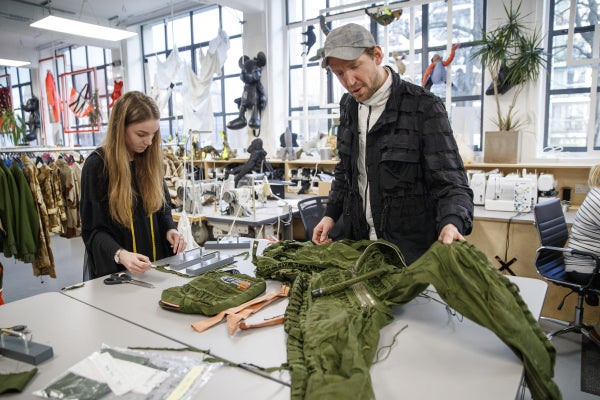 British fashion designer Christopher Raeburn (R) poses for a photograph a MIG jet fighter jumpsuit that is being turned into hand bags at his studio in Hackney, east London on March 16, 2018. After a childhood building tree houses and robots, British designer Christopher Raeburn has made a career out of transforming unusual materials -- including parachutes -- into clothes ready for the catwalk. © TOLGA AKMEN / AFP

After a childhood building tree houses and robots, British designer Christopher Raeburn has made a career out of transforming unusual materials — including parachutes — into clothes ready for the catwalk.

More than a decade since graduating from London’s prestigious Royal College of Art, Raeburn has made a name for himself with streetwear fit for the style-conscious, environmentally-aware buyers.

“We only do three things. We either remake, we recycle or we reduce,” the 35-year-old told AFP.

Raeburn has picked the former premises of veteran fashion house Burberry for his own label, in a former industrial zone of east London.

The open-plan airy office is filled with sewing machines, ironing boards and rolls of fabric. When AFP visited, a group of seamstresses were busy creating animals made out of fabric — a quirky specialty of the designer.

Pieces from past collections are stored in large white wardrobes, including a military jacket.

“With (the collection) Remade, it’s about deconstructing and reworking,” said Raeburn of the piece, which in its original form was a guard’s uniform from Buckingham Palace.

“Ultimately I think as humans we cannot continue consuming in the way that we are, and not just clothing — everything from product design to food, are incredibly wasteful,” he added.

Such an attitude has been at the heart of Raeburn’s work throughout his career, including his first show at London Fashion Week.

“I bought one parachute on eBay, I think it cost me £30 ($42, 34 euros), and from that one parachute I made eight garments… And things have just grown step by step from there,” he said.

Raeburn has numerous sources for his materials, including foreign imports, hunting through military surplus, as well as other channels which are kept as closely-guarded secrets.

“I get asked a lot, you’re not worried that things are going to run out?” he said, commenting it is “scary” just how much excess material is available.

“(There are) hundred of thousands of these items that have never been used,” said the designer, explaining the suits are often thrown away after a certain period of time to abide by health and safety rules.

Raeburn also bought a raft, cutting it up to make coats, jackets and bags.

“You pull on the rope and then the whole thing expands and inside it had everything you would need to survive on the open ocean for one month for 25 people,” he explained.

The designer’s ability to rework such an array of materials is attributed to his childhood “in the middle of nowhere” in south-east England, close to the wood which inspired the “Winnie-the-Pooh” books.

Raeburn and his two older brothers were encouraged to draw things which their father would help them build at the weekend.

“That’s an amazing way to bring up kids because we ended up designing everything from tree houses to robots,” he said.

While the urban London fashion house is far from the designer’s countryside childhood home, he has certainly brought his young imagination.

His environmental conscience has also made its mark on the studio, with the use of green energy and his decision to cycle to work.

Despite the obstacles to Raeburn’s business model — trying to source unusual materials while working in a hugely competitive sector — he is determined to continue making it a success.

“Every day is a challenge… but then that’s the exciting thing, who wants a boring life?” MKH