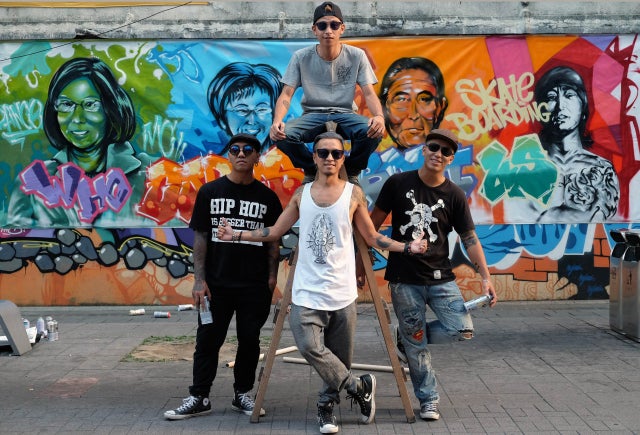 At the edge of a bustling shopping district, Taiwan’s graffiti artists are finding a safe haven for their art at a revitalized park.

More parts of the island have welcomed legal graffiti zones as Taiwan seeks to cast itself as a hub for creativity and design.

One of the best known is the Taipei Cinema Park, just blocks away from the neon-lit Ximending district — the heart of youth culture in the capital.

Adorning walls around the plaza and along the surrounding alleyways, colorful murals have transformed a once-derelict area into a beguiling visitor attraction.

Not only is graffiti in the zone sanctioned by authorities, artists can also rest assured their artwork will be seen and respected, said Jimmy Cheng, who manages the graffiti space.

“There are a lot of different types of graffiti. Some are worth preserving,” he told AFP.

“If there’s no management of a space, then good artwork will get covered up. I think that’s a shame,” said Cheng, himself a former graffiti artist.

Artists are required to show their portfolio before they are allowed to spray on the park’s walls.

Cheng said that proper curation of the park’s walls helped to prevent arguments between rival artists.

“If no one manages it, then it’s a constant battle of ‘I’ll cover yours if you cover mine,'” he said.

The Taipei Cinema Park also hosts events such as street dance and tattooing, and regularly invites international artists to spray on its walls.

Graffiti also abounds along Taipei’s riverside, where elaborate pieces can often be spotted under bridges and on dike walls. CC