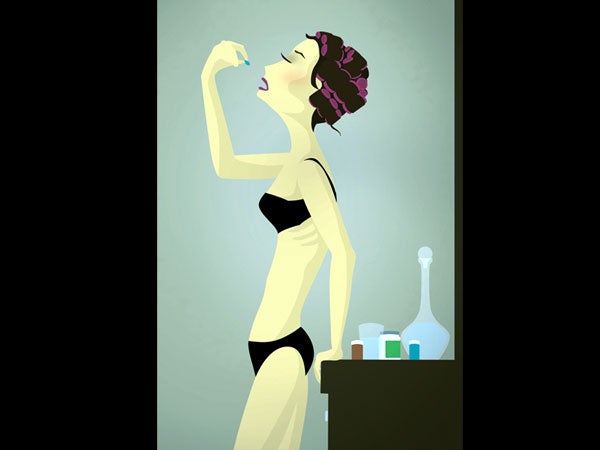 Dying to be thin

So we all want to be svelte. Losing weight the wrong way, however, could mean losing your hair, developing bad skin, getting nasty, and even jeopardizing your health—so do it right 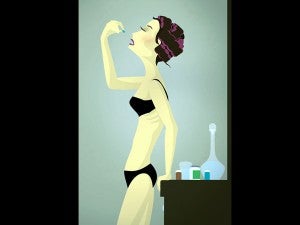 Her breasts were full and her derriere, as the French would call it, was shapely.

Curvaceous and voluptuous, Candice, at 19, had a fully developed body and assets that many girls her age could only envy. And Candice certainly knew how to accentuate them by wearing low-cut tops and tight jeans.

But what Candice really wanted to wear were tops that exposed belly buttons and belly rings – the kind of tops her skinnier friends were wearing.

This perception started Candice on her many years of trying out different diets and experimenting with various weight-loss pills; some were even prescribed by her doctor.

“I tried everything from Ionamin [an upper] to Bangkok pills,” recalls Candice. When she ran low on these pills, she would try substitutes, and just about anything that she heard was new on the market.

Hydroxycut, Duromin, Ballerina, Xenadrine, and green tea pills from local drug stores and organic food outlets. Candice didn’t stop there; she also combined this with working out and eating minimally.

The pill-popping cycle momentarily came to an end when Candice found herself in a relationship. “The pills were making me moody and paranoid,” Candice says of her bad girlfriend behavior.

But what was more frightening for Candice was how she almost “crashed.” “I drank my pills and was working out, but didn’t really have a lot to eat,” she recalls. “Suddenly, I felt like a huge boulder was plunked down on my chest and I couldn’t breathe. I didn’t know if it was some kind of anxiety attack, but it really scared me.”

That did it for Candice. She swore off the pills, the starvation, the excessive exercising. By that time, she was 27 years old.

Dr. Tina Tanbonliong, of the Weight Management Team of The Medical City says that the lethargy, sleepiness, and mood swings experienced by Candice are common among women who lose too much weight too fast.

“Malnutrition actually has two spectrums,” explains Tanbonliong. “You can either be too thin or too fat; it can be a case of under nutrition or over nutrition. However, the common notion of malnutrition is that of being too thin, and that only poor people suffer from it.”

It is normal to have “problem areas” such thunder thighs or a big belly, but these alone do not make you fat. Tanbonliong advises using the Body Mass Index (BMI) as the best indicator of ideal weight.

“BMI is still a good measure, because it takes proportion into consideration. You may seem not to weigh much, but if you’re on the shorter side, it can still mean you’re overweight,” says Tanbonliong of the formula for computing BMI, which compares height to weight.

For those thrown into a panic at the thought of trying to lose weight for the summer season or whatever reason, Tanbonliong advises against losing more than one to two pounds of fat per week.

Losing more than that will signal your body to that it needs to burn its own muscle mass for energy, which will effectively negate any weight loss efforts.

Tanbonliong offers a simple explanation. “Our bodies need fuel to function, and we get this from food. When the body doesn’t get enough fuel from food, it will use up or burn muscle mass for energy, causing lethargy.”

Apart from these inherent dangers of rapid weight loss, both Tanbonliong and Dr. Christopher Joseph Soriano, an ob-gyne with the Family Medicine Department of the Delos Santos Megaclinic, says that rapid weight loss also has added implications for women.

On a normal basis, losing about 100 hairs a day is a normal part of the hair growth cycle.

However, alopecia or shedding hair is a side effect of sudden emotional or physical stress and deprivation of nutrients, such as what happens in crash dieting. Described as a “shock to the body system,” it can cause hair to come out in clumps, sometimes leaving a bald spot on your head.

Soriano also describes a condition known as secondary amenorrhea, or not having your period for six to 12 months, as a side effect of drastic weight loss.

“A woman’s menstrual cycle is regulated by the portion of the brain called the hypothalamus. This also controls body temperature, appetite, and blood pressure. The hypothalamus stimulates another part of the brain, the pituitary gland, to release hormones that regulate the

production of the female hormones estrogen and progesterone,” explains Soriano. “When this function is impaired due to improper nutrition, your menses is affected.”

Other factors, such as being overweight and exercising too much, can have a similar effect, as the body is subjected to a high level of stress.

“When you don’t eat properly, you don’t have enough fat in your body. And fat is an essential food group, and is responsible for the absorption of vital vitamins A, D, E, and K,” says Soriano.

Furthermore, a deficiency like an anemia can result in your period stopping. In some drastic cases, amenorrhea may cause infertility.

Related to the hormonal imbalance of not eating right, your weight loss can also make you moody, cranky, and generally unpleasant. “It can be as simple as not being a nice person because you’re hungry,” says Tanbonliong. “But seriously, most of the effects are hormonal, like your period, so naturally, other things related to hormones like your mood and general disposition will be affected, too.”

The body needs a certain amount of calories to run.  Without this, your sodium and potassium levels will drop, making you prone to cramping and feeling sick.

Tanbonliong generally recommends a calorie intake of 1,500 a day for adults. “An intake of 1,800 is already a bit too high. If you’re not very active, you might need to go down to 1,000,” warns Tanbonliong.

It’s all a matter of balance, she says. The more active you are, the more food – which acts as fuel – you need. If you have more of a sedentary lifestyle, you will burn less calories and therefore, should eat less.

After giving birth, many women feel compelled to lose weight quickly, for fear that if they don’t, they’ll never lost this version of “baby fat.”

“Give yourself three to six months to fit into your skinny jeans again.  Losing too much weight too quickly can compromise the nutrients in breast milk, and can cause lactation problems,” says Soriano.

Breastfeeding burns 500 calories a day, and many women say it is mother nature’s own weight loss regimen.

Both Soriano and Tanbonliong have recorded a number of patients who drink herbal teas to induce bowel movement.

“Before your body even gets to absorb the fats, it will already flush it out. You are in effect depriving your body of necessary nutrients,” says Soriano, explaining how these teas work.

“They tickle the gut and trigger it to expel its contents. The pounds that you shed are mainly water weight and not fat, which can cause you to be dehydrated,” adds Tanbonliong.

Dehydration also has ugly manifestations like sunken eyes, dark circles under the eyes, and dry skin.

In this case, the price of being thin is ugliness, both inside and out, as you turn into a nastier, gaunt version of your former self.

At least that’s what Candice figured out for herself. After her “crash,” she discovered running and cut pork and beef from her diet. She’s now at what she calls her “happy weight” of 102 lbs. The tummy is still there, but she’s perfectly fine with it. She shrugs it off. “My fave parts, my breasts and butt, never looked better because of the running.”

In 2008, a women’s magazine invited Candice to pose in the nude, along with other girls of different shapes and sizes, and she said yes. “It was the perfect way of affirming that I love my body – flaws and all.”

Sub: Some tips to ensure that you don’t jeopardize your health in the process

Ø Consume 500 calories less of what you’ve been regularly eating.

Tanbonliong cites an example: “On a usual day, you drink two cans of soda, about 300 calories each. Just by doing away with soda, you can already lose weight.”

Other examples or mini-goals cited by Tanbonliong: No cakes or dessert, or lessen your rice consumption.

If you were to imagine your plate as a pie, make sure that one half of it plate is fresh veggies. One fourth should be meat (about 1 lb size), the other one fourth is your choice of carbohydrates—one bread roll or cup of rice.

“Don’t go for seconds. If you still feel the need to eat, add veggies. You can eat as much of that as you want,” says Tanbonliong.

Go for food that is cooked in other ways, apart from being fried.

Ø How to compute for BMI:

According to the Center for Disease Control and Prevention, the standard weight status categories associated with BMI ranges for adults are as follow:

For example, here are the weight ranges, the corresponding BMI ranges, and the weight status categories for a sample height.

LOOK MAGAZINE is available in all leading bookstores and newsstands nationwide.