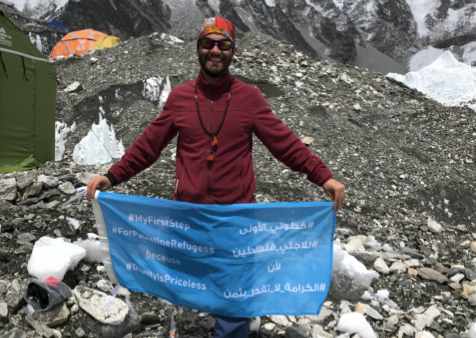 Jarah al-Hawamdeh, a Palestinian refugee-amputee recently climbed Mount Everest to raise $1 million dollars in funds to save his school, the UNRWA Al-Jofeh Boys School. This comes after the school was placed in risk of closing due to drastic funding cuts to the United Nations Relief and Works Agency (UNRWA).

Jarah was afflicted with bone cancer when he was only 15 years old, which led to his right leg being amputated. Despite this, Jarah did not lose hope and still continued to attend school.

After his amputation, the school transferred his class on the first floor just so he didn’t have to go up the stairs on his wheelchair. They also renovated the bathroom so it could accommodate him. This is why he is now on a mission to save his school amidst fears of closure.

Jarah also wanted to show fellow cancer patients like him that hope is never lost. Jarah was quoted as saying, “I wanted to make a strong statement. To be a climber, you need to push yourself a lot. Not everybody can be a mountaineer. Let alone someone with one leg.”

Jarah is expected to reach the base camp of Mount Everest by April 20, but he took to his Twitter account last April 14, announcing that he had already made it.

#MyFirstStep to keep my school open began April 3, and 17,500 steps later on April 14, I finally reached Mt Everest Base Camp (5364 m)! I have done my part, now do yours at https://t.co/b2DrSSfHzv. #ForPalestineRefugees #DignityIsPriceless. #everest #climbing #mountains #unrwa pic.twitter.com/fbDNN65Kyb